National Artist Thawan Duchanee passed away yesterday, but his work and most important philosophy and contribution to popular Thai thought and art will live on 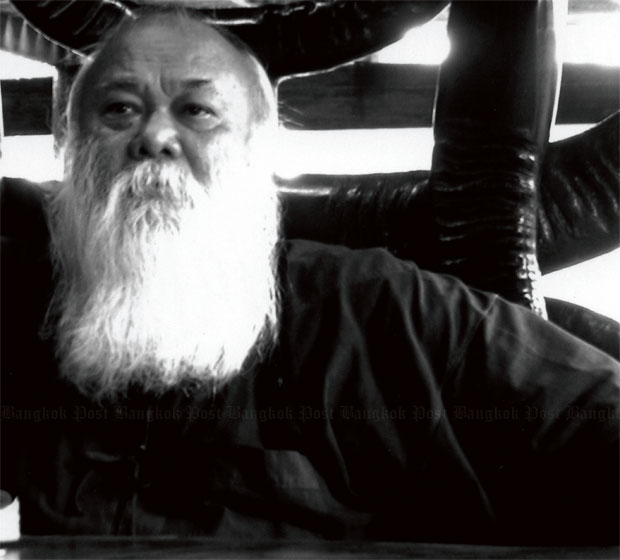 THAILAND HAS LOST its most prominent artist, a rambunctious extraordinaire whose career was
as renowned as his influence in shaping the contour and perception of modern Thai art in the past 40 years. Chiang Rai-born National Artist Thawan Duchanee passed away at 2am on Wednesday morning from liver disease after spending three months in a hospital, his son Doithibet confirmed in a statement. He was 74.

Thawan’s paintings are known for their phantasmagorical swirls of solid colours, usually black on white canvas, and often with the figures of Buddha, demons and beasts forming a metaphysical cosmology. Throughout the decades, Thawan refused to be pigeonholed into any easy category. It’s often said that early 20th-century European surrealists were his inspiration, but Thawan rejected the label and sometimes claimed, more in jest than in condescension, that people who said so didn’t understand his art.

Likewise he often mixed laughter with ambivalence when he said that his pieces — from paintings to sculptures, architectural design to ballpoint-pen drawings — weren't essentially Buddhist. That was typical for the rotund man with the flowing Gandalf-beard, indigo shirt and flip-flops, who was often remembered for his humour and witticisms. Thawan's disarming appeal was manifest in the fact that he could hide seriousness and truth in boyish jokes and sarcasm.

"People don't care about art, but hundreds of thousands of them flock to the Motor Show," Thawan said in an interview with in 2002. "Among nations with the same level of development, Thailand is exceptional in its lack of national art museums. We only use temples and old palaces to display art." 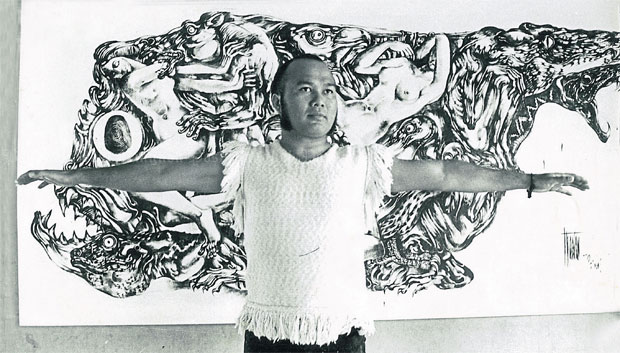 "One day the greatness of politicians or important people will disappear. The only thing that will remain is art"

Thawan Duchanee was born on Sept 27, 1939, in the northern province of Chiang Rai. He was the youngest boy in a family of four siblings. He attended school in Chiang Rai before moving to Bangkok to join Pohchang Academy of Arts. An exceptional student with a skill for doing quick, realistic portraits, he went on in 1957 to the Silpakorn University's Faculty of Fine Arts, where Thawan became part of the last batch of Silpa Bhirasri's pupils. It was with Silpa's encouragement and support that Thawan received a scholarship to study a master's and Ph.D at the prestigious Rijks Akademie van Beeldende Kunsten in Amsterdam, the Netherlands.

His outstanding skills and eccentric personality quickly earned him a reputation in Europe. When he returned to Thailand in the early 70s, he was present at the crucial crossroads in the paradigm of Thai art. According to art historian and permanent secretary at the Culture Ministry, Dr Apinan Poshyananda, Thawan was a transitional force between the legacy of traditional Thai art as established by Silpa Bhirasri since the pre-war period and the modern and even postmodern thinking of the new times.

"At that time, internationalism was all the rage and artists were influenced by Western aesthetics," said Dr Apinan. "But Thawan came to the scene and made a huge impact when he offered a gift of hybridisation and reinterpretation. His love of Lanna art and his belief in regionalism and spiritualism meant he could bring the local identity to the forefront. He also took inspiration from Tibetan Buddhism, Burmese art and other Oriental thinking. It was anti-mainstream and later what he did was so popular that it became a new mainstream.

"He was a true avant-garde — not because he did abstract art, but because of his individualism. He defied category because his greatest skill is to assimilate and hybridise various elements, identities and forms."

In the early 70s, Thawan's set of paintings that interpreted Buddhism in a progressive and somewhat unusual light — depicting Lord Buddha and the Mara — became a case of notoriety that signified a shift in the way Thai art made its contact with the larger society. Seeing the paintings as blasphemy, vandals walked in and scratched his pieces. It caused uproar. Thawan, true to his jovial form, said that the vandalism was a case of misinterpretation of his works, which of course promoted the Buddhist spirits, then he proceeded to destroy most of the paintings from that series. Only a few of them are left.

After the incident, Thawan's post-tradition take on Buddhism received a major boost. He had a major exhibition at the British Council in Bangkok in 1973 and one of the guests was MR Kukrit Pramoj, a former prime minister and renaissance man with substantial cultural influence. In no small part, Mr Kukrit's presence served as an endorsement that Thawan wasn't a subversive force, but an artist whose vision was pushing the country into a new artistic realm.

As his fame rose, Thawan challenged another long-standing myth about being an artist in Thailand: He made money from his art, and he wasn't shy about it. Thawan often said, again more in jest than in arrogance, that a few brushstrokes could earn him a million baht. It was true, but it's also a good-humoured exaggeration and Thawan said it not to brag but probably to prove that art could indeed have a modern value. Internationally, his works could fetch millions as well. One of his most legendary projects was when, in 1977, Thawan was commissioned to paint a few hundred rooms at the 700-year-old Gottorf Castle in Germany. The artist took three years to complete the paintings that showed his unorthodox hybrid of Mars, mystery, Germanic strength, Italian swirls and Thai intricacy.

Throughout his career, Thawan didn't have all that many exhibitions in Thailand, but the masterpiece that most Thais are familiar with is his iconic Ban Dam compound in Chiang Rai, which is open to visitors. A collection of almost 40 houses, mostly in black, is an architectural cosmology of Thawan's philosophy and a museum for his love of the dazzling as well as the macabre.

The houses, built over the past 40 years, are made of wood, glass, concrete, brick and terracotta and they house his collections of paintings, sculptures, silver, gold, animal bones, skins and what seems to be his favourite item, buffalo horns. The land on which the houses stand is where, as a young man, Thawan is said to have practised knife-throwing and archery, the practice that he later said helped him to focus when he held a paintbrush. "I'm a painter. All the carcases here are for sharpening my imagination, starting with nature," he said of his Ban Dam. He added that one of his houses was "my telephone booth where I talk directly to God. It's a box that contains my body and spirit.

"Everything in here represents the circle of life — birth, ageing and decay."

Death, in many forms, had been Thawan's obsession. "It's a normal part of ancient civilisation," he said in 2004. "Since I was 36, I've thought about death, questioning myself on what I've achieved and I always maintain a state of awareness. We should be aware that the tongue of the viper could bite us any time, kill us with venom."

But that fatal taste of the venom can probably be alleviated, or distracted, or exalted, by the virtue of art.

"Art is breath. It adds value to man," said Thawan. "But let me say something. People often say that art is achieved through the heart. For me, art should never have a heart. If there's still an ego, a soul, then it is not yet enlightened. Aside from art, everything else is like outer skin.

"One day the greatness of politicians or important people will disappear. The only thing that will remain is art."