Research into a rare neurological phenomenon has led a South Korean designer to create a most unusual line of cutlery and, in the process, to fire many people up with her revolutionary findings

It’s instinctive, one of the most basic of our instincts. We human beings are programmed to enjoy eating because we need to nourish our bodies in order to survive. But food has never been just something to fill our stomachs with; it’s a source of sensory pleasure and feelings of well-being, it’s the focus of any number of social occasions and festivals, it evokes fond memories of other meals and who we were with at those times and, in the case of designer Jinhyun Jeon for one, it is the springboard for some incredible ideas. 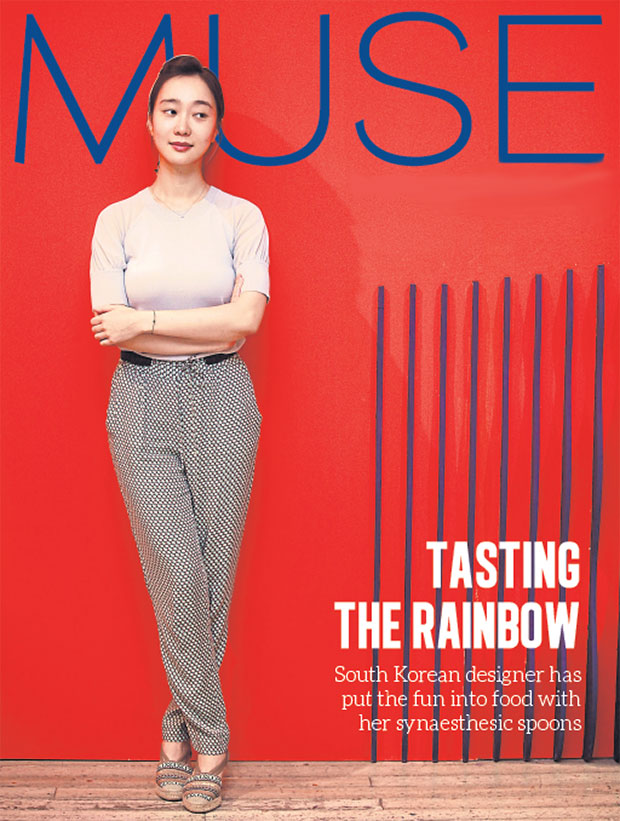 Jeon completed her master’s degree at Design Academy Eindhoven in the Netherlands. The title of her postgraduate thesis was “Synaesthetic Sensorial Stimuli” and it dealt with synaesthesia, a neurological phenomenon in which the stimulation of one sense leads to that person experiencing sensations or feedback via another one of the senses. Jeon, a native of South Korea, has devoted a good deal of time to exploring sensorial perceptions as well as intuitive behaviour in order to engineer a fuller experience for the senses, particularly when a person is eating.

“My research focused on the subject of synaesthesia, which means cross-wired perception. For example, you can ‘hear’ colours or ‘smell’ sounds. There are some people who have this ability, but synaesthesia is actually still very unclear and controversial,” said Jeon, who believes that we are all born with this ability, but lose what she terms an “unnecessary connection” as we grow older.

Speaking at an international symposium called “Creativities Unfold 2014: If... Defining The Future”, organised recently by the Thailand Creative and Design Centre, the Eindhoven-based designer explained that we all experience this synaesthetic effect without noticing it, such as the way we can sometimes “smell” the flavours that we are tasting. People whose synaesthesia is particularly strongly developed, she noted, might be able to “feel”, for example, the texture of a sound.

“As I did more research into synaesthesia, I got increasingly interested in, and amazed by, some people who have this ability and how they perceive the world so differently. It has been observed by researchers that if we [human beings] are kept in complete darkness for more than three days, our brain thinks that we are blind and our other senses become heightened. It’s quite amazing how the brain finds an alternative way.” 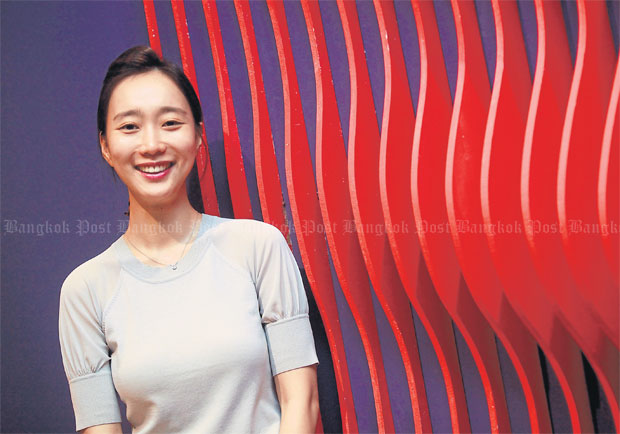 After doing all this research, Jeon wanted to translate her findings into something relevant that people could experience, and what she came up with was food and its consumption. She discussed the way synaesthesia can enhance dining pleasure in a session she led at the symposium entitled “What if tableware becomes an extension of our senses?”.

“Eating is the only moment when we use all our senses, so I researched taste and the other senses, asking questions such as: what temperature is sweetness at its sweetest?; what is it that makes us think something is tasty?; and, what colour most affects our sense of taste? The volume, weight and form all have a connection to taste,” she said.

She then went on to design a set of cutlery — she prefers the term “tableware” — intended to stimulate the senses. The thickness of the handle of a spoon or the addition of projections to its rim or bumps to its underside can all make a diner perceive taste in new ways. Jeon’s strange-looking utensils are able to maintain a particular temperature and this feature works in harmony with the intent of the design — which is to use temperature to create different effects. 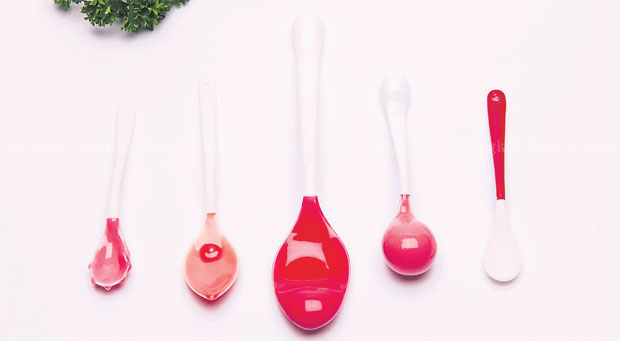 “When you eat something which has the same temperature as your body, the sweetness is at its sweetest. When you drink iced chocolate and hot chocolate, even if they contain the same amount of sugar, they will taste different. If you are aware of the effect that temperature has on taste, people who need to watch their sugar intake, for instance, might be able to cut down on their consumption of sugar,” she explained.

The same concept applies to saltiness: the salty taste is more evident in hot food than it is in cold food. Although subtle, this difference might help people reduce the need for unhealthy flavour additives, she remarked.

Her innovative take on the subject of taste resulted in Jeon receiving an invitation to collaborate with several Michelin-starred restaurants and hotels in the Netherlands, including the renowned De Treeswijkhoeve in Waalre, a town south of Eindhoven. Her goal is to get people to enjoy food in a more instinctive way, focusing more on their sensory experiences rather than table manners or restaurant etiquette.

“I want to see how people react. The volume spoon [one of her designs] makes people suck the spoon, even though it contains no food, so it slows down the eating speed unconsciously. They touch the texture of the spoon. They see the colour. They make sounds. My aim is to let people use all of their senses by using my sensorial stimuli tableware. Their way of eating does actually change,” the 33-year-old said with a smile.

From collaborations she’s done with fine-dining establishments, she’s noticed that the way people eat changed dramatically, from being “proper”, adhering to conventional table manners, to being more childlike as they clearly have fun, emitting more sounds and laughing more often. Her “Tableware as Sensorial Stimuli” line was nominated for a Best Product award in the Accessories category at last year’s “100% Design”, the London trade event. 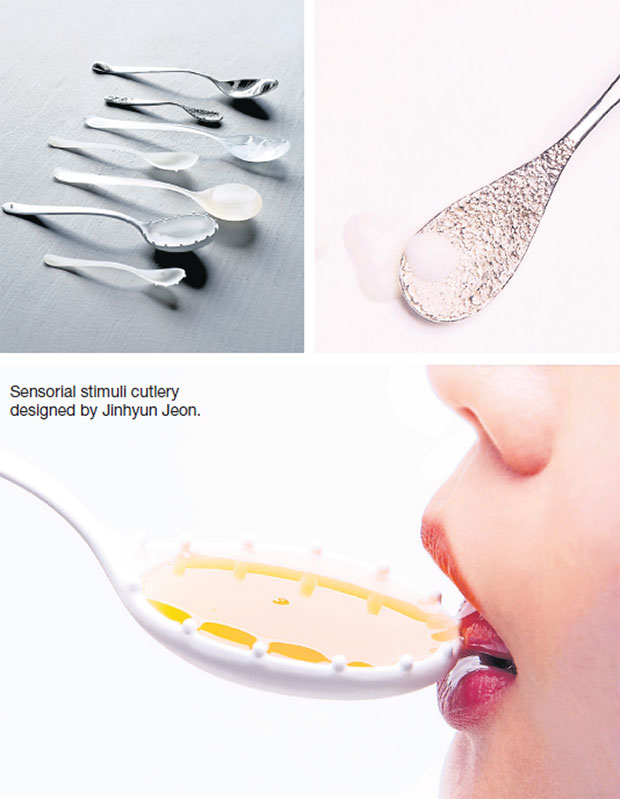 And it’s not only cutlery that interests her; Jeon has also been paying a lot of attention to creating the perfect ambience for a meal, using what she has learned from research work and personal experience. She found that hearing certain sounds, such as the fizz of bubbles escaping from an effervescent drink, or the crunch made when deep-fried or crispy food is munched on, can actually increase a person’s appetite. As a result, she is now doing more research into sound design specifically to enhance the dining experience.

Another important discovery she made was the influence of colour on the appetite for food. Reddish hues, particularly crimson and scarlet, have the ability not only to sharpen the appetite, she said, but also seem to affect one’s perception of taste.

“If people are given a choice between yellow and red watermelon, even if both contain the same level of sugar, they automatically think the red fruit is sweeter. This kind of experiment is still controversial, but most people do seem to assume that food that has a reddish colour will be sweet. When I did research into colour and taste, most of the people I spoke to said that reddish colours increased their appetite.”

Jeon’s ideas have already been widely discussed, exhibitions about her findings have been held in many countries and she herself has taken part in a host of design symposiums around the world. She did readily concede, however, that she will need a lot more exposure to Asian eating culture and Asian food and taste preferences before she can come to any conclusions about people living in this part of the world.

“I want to share my ideas with more people. I did my master’s degree and my thesis in the Netherlands so the experience I have had is related more to European people. I want to make it [her body of experience] more diverse. This is a chance for me to widen my ideas,” she said, giving a bright, hopeful smile.