Yod Sangrungruan died on Oct 9, 2003. He was the last remaining soldier of the 1,284 members of the Siamese Expeditionary Corps, who fought with the Allies in World War I against the Central Powers.

To commemorate the event, the French Embassy is putting on an exhibition of rare photographs and a video featuring Siamese soldiers during the war.

French Ambassador Thierry Viteau said the centenary commemoration is to stress the fact that Siam, despite remaining neutral for several years, did join the Allies in the end.

“We want to commemorate and to express our thanks to Siam for having joined this war, for having sent soldiers to the front. The Siamese Expeditionary Corps stayed in Europe even after the war ended,” Viteau said.

“Some of them were sent to Germany to occupy parts of the German territory with French forces, and stayed there until about a year later.”

King Rama VI sent Siamese volunteer troops under the command of General Phya Pijaijarnrit to join the Franco-British forces on the Western Front.

The war ended soon after their arrival, but Viteau said it was around the same period when the US joined the war, an event which was an enormous turning point for the Allies.

“From the archives of the French Ministry of Defence, we have a lot of photographs dating back to that period that show the participation of Siamese soldiers,” Viteau said.

“We have selected 24 of them to put on show, and also a 10-minute silent film showing the activity Siamese soldiers while training in France and at the front.”

The photographs will be displayed today at a reception for invited guests at the French Embassy.

They will be moved on Thursday to Alliance Francaise on Witthayu Road, where they will be open for public viewing.

There will also be a screening of director Léon Poirier’s Verdun, Visions D’Histoire (Verdun, Visions Of History), which will be accompanied live by pianist Hakim Bentchouala-Golobitch, on Thursday at 7.30pm.

The War Veteran’s Organisation of Thailand will also hold a commemoration ceremony at Sanam Luang, today at 2pm. 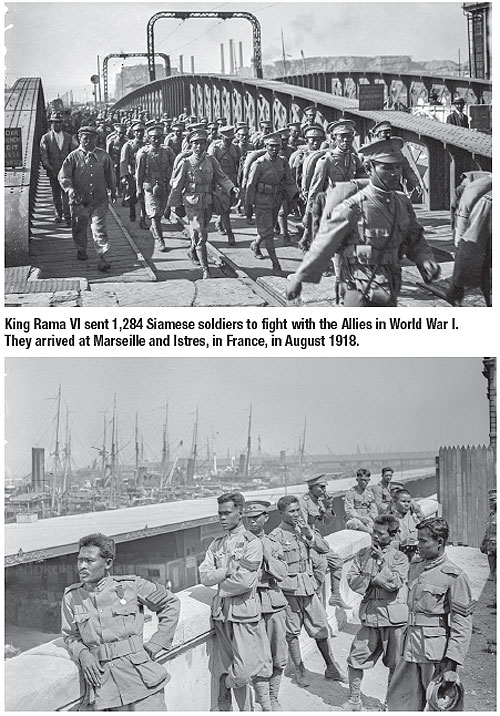