published : 31 Mar 2015 at 06:00
newspaper section: Life
writer: Melalin Mahavongtrakul
Students like accompanying one another to the bank.

Every day, 11-year-old Waiyawat Sabaidee is given 100 baht. He is in Prathom 5, but has been depositing money regularly ever since he was in Prathom 3.

"I don't really know what to do with the money. I just want to keep it first," said Waiyawat.

From his daily allowance, he manages to save 20 to 40 baht, which goes into his bank account at Watkhodtimtaram School in Rayong. Whatever is left after his daily spending on lunches and snacks, and bank deposits, he puts in his piggy bank at home. Waiyawat now has 16,000 baht in his savings account.

Another student, Kamonluck Saowarote from Prathom 6, recently closed her account at the school as she will soon be starting secondary school. Her closing balance came to over 14,000 baht.

"My mum said we can use this money to pay for the necessary expenses in getting into secondary school, like new uniforms and tuition fees. I also want to keep the money for my education," said Kamonluck.

The school bank is a joint project ran by the Citi Foundation of Citibank and Plan Thailand, an NGO which focuses on children's development. The programme was initiated to educate students on financial literacy, as well as encourage children to start saving at a young age.

"Financial education is a skill that kids should learn before going out into the real world. We, however, feel that this skill is not being taught properly in schools," said Sawai Seesai, project manager at Plan Thailand. The organisation also supports the school bank project in 13 schools in four provinces, Ayutthaya, Rayong, Chiang Mai and Chon Buri.

The student-run bank opens twice — morning and lunch — for a period of half-an-hour. The students queue up, fill out the deposit form and hand in their bank book and money — just like in any real bank.

Inside the bank, a group of students — under a teacher's supervision — work as bankers. They receive and count the money, key the amount into the system, and update the account book. When they're done, they hand the book back to their smiling peers.

No savings are too small at the school bank and students have reportedly come in with an amount ranging from just 2 baht to thousands, especially at special occasions like birthdays. Over 80% of the school population deposit their money at the bank, which has been open for a few years.

Ajjima Wattanasuk, a 5th-grade teacher, is the programme's supervisor at the school, which oversees 40 students — Waiyawat and Kamonluck included — who take turns in running the bank. 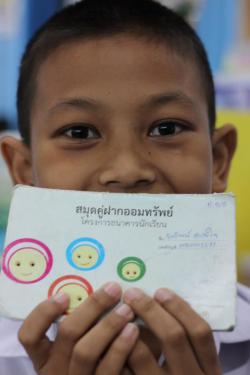 Waiyawat Sabaidee is a regular patron at the school bank.

"To be honest, I didn't expect this project to last this long," said Ajjima. "Now, however, even community members and teachers are also opening accounts here. We have about 3 million baht in total from almost 2,000 accounts."

Though acting as a school bank, all the money is in one account under the school's name at a local bank for safety purposes.

Reasons for students withdrawing money range from forgetting to bring school lunch money to needing money to buy a new notebook. Anyone wishing to withdraw a large amount of money, however, needs to bring their parents in with them.

Overseeing the bank means that as well as playing bank manager, Ajjima also has to put on her detective hat. She recalls one occasion when a student brought his friend's bankbook and tried to withdraw money for himself. There have also been incidents when a student working at the bank has keyed the wrong amount into the system. Aside from these minor troubles, however, Ajjima said the project runs smoothly and is proud of her students, especially the ones who help out at the bank.

"We don't have to always tell them what to do. The kids take the initiative themselves and are now giving advice to younger kids and parents without us interfering," said Ajjima.

Simply saving money is not enough believes Hassaya Hasitabhan, senior vice-president of corporate affairs and head of corporate citizenship at Citibank, who is hoping students increase their savings through entrepreneurship. Such student-led projects include making salted eggs and herbal drinks, balloons for decoration, as well as for various other products. In fact, all students are encouraged to come up with something to sell at school events, and the school even lends them money to start up their small business venture. Together with the organisation's help, students are sometimes taken to real markets to experience the real world of commerce.

"The students get to meet different customers — both Thai and tourists — to broaden their experience. They learn how to set up booths and plan promotions," said Hassaya.

"The children get to see and learn that what sells in their school may not work in the real market. It's a different setting and they have competitors," added Sawai.

Suppaluk Tangkolchan, director of Watkhodtimtaram School, added that parents have been really supportive of the school bank project — if not overly supportive at times. For example, some parents give money for children to deposit directly into their accounts, which defeats the purpose of the programme, being for students to save portions of their daily allowance.

As further incentive, some parents agree to match whatever their children put into the school bank to encourage savings. Children — no matter how young — should be able to do things for themselves, believes Suppalluk, not just turn to their parents at every whim.

"We always view children as immature and irresponsible," commented Suppaluk. "Thai society spoils kids too much, seeing kids as young people who can't take care of themselves. This makes the students shirk their responsibility. We have to allow them a chance to take care of themselves, or they'd just call for their mums whenever they want anything." 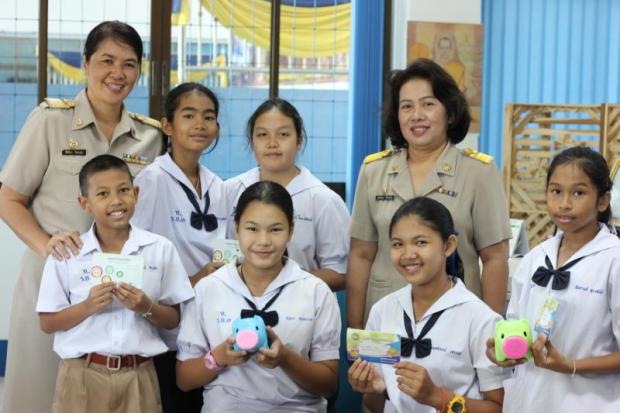 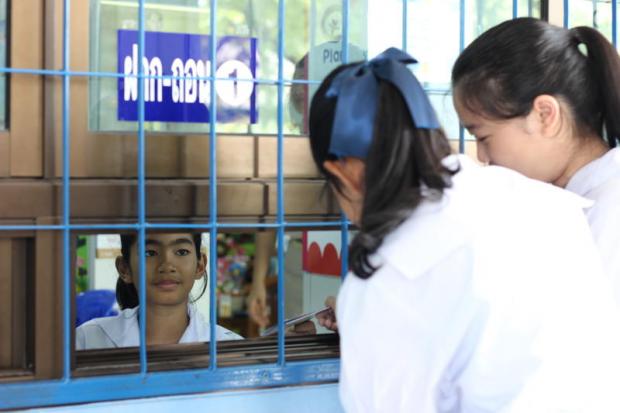 The school bank is run for students, by students.

Play along with the Philharmonic Orchestra

Irish rockers The Script to make Thailand return in September