The fine art of cultural preservation

Borvornvate Rungrujee, director-general of the Fine Arts Department, has an ambitious plan: every year for the next 10 years he will submit one cultural site to be considered for Unesco's World Heritage List. 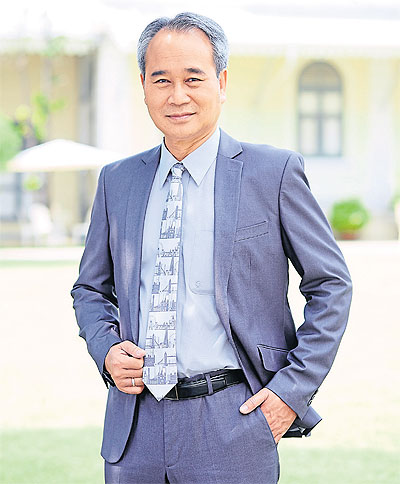 "The Kingdom hasn't had any new cultural World Heritage Sites since Ban Chiang Archaeological Site was added to the list in 1992," said Borvornvate.

It took the department more than 20 years to make the next move. On January 27, the National Committee on the Convention for the Protection of the World Cultural and Natural Heritage of Thailand submitted a dossier on Phu Phrabat Historical Park in Udon Thani, prepared by the Fine Arts Department, for consideration by Unesco. The site, which has been on the tentative list since 2004, is now in the process of being evaluated.

What makes you feel confident that Phu Phrabat Historical Park will get World Heritage status?

Phu Phrabat has outstanding universal value that fits the criteria for a Unesco World Heritage Site. It bears evidence of a long-lasting civilisation from the Bronze Age to the Dvaravati, Lop Buri and Lan Chang periods, until the present day. The site has an outstanding landscape due to its peculiar rock formations, which are also associated with beliefs or living traditions of the people from the Northeast.

We received a confirmation letter on February 27 that Phu Phrabat Historical Park met all of the technical requirements. The next process is to evaluate the site.

From July to September, a team from ICOMOS [International Council on Monuments and Sites, which offers advice to Unesco on World Heritage Sites) will review the nomination dossier, while one reviewer will visit Phu Phrabat for site assessment. The final evaluation report will be finished by March next year, and ICOMOS will inform us about its report in May.

What are the other potential cultural sites in Thailand to be submitted?

Other potential sites we plan to add to the tentative list are Prince Naris's architecture, the cultural landscape of the Chao Phraya River, the Death Railway in Kanchanaburi, Si Thep Historical Park in Phetchabun, Wat Suthat Thepwararam and the Giant Swing in Bangkok, Wat Ratchanadda and its vicinity, archaeological and cultural Sites in Nan, Chiang Saen Historical Site in Chiang Rai and Wat Phra Pathom Chedi in Nakhon Pathom.

What are the benefits of having World Heritage Sites apart from adding to the nation's pride and attracting more tourists?

Many people ask me what we get after paying $7,000 [224,700 baht] for a yearly membership fee. We do not receive financial support except when we ask for help. For example, after the big floods, we received $20,000 for repairing the Historic City of Ayutthaya. We can also ask Unesco for their expertise when we need it. Unesco will also keep monitoring us to ensure we take good care of those World Heritage Sites.

Being listed as a World's Heritage Site shows that we have an international standard to protect. This indicates that it is not the duty of one organisation like the Fine Arts Department, but the whole country, including local authorities and communities, to help watch over the sites in order to keep them in good condition.

What will be your policy regarding the 104th anniversary of the Fine Arts Department this year?

I will focus more on our core values and improving the quality of our personnel. I have announced key performance indicators based on pieces of work they do, not the works they hire or outsource to third parties. This will help reduce our yearly budget and increase capacity.

We operate more than 40 national museums, but some of them are small and not up to standard. My plan is to reduce the number by half to about 20 national museums and keep them at big cities. The rest will be changed to exhibitions.

Since the department has the budget for maintaining historical sites, why does it often take a long time to start repair work?

There are more than 20,000 historical sites under our protection. We can't allocate a budget to every site as the maintenance cost for each site is quite high. We have to make best use of our budget.

We also need to talk to locals or those who own the places, such as temples and nearby communities, to help them understand our working processes. Sometimes we find that the repair process carried out by locals damages the original value of some historical sites.

What is your recommendation for a 'must-go' museum in Thailand?

The Bangkok National Museum because visitors will learn the roots of the Thai people and learn more about national treasures. The museum is also the model of what we want other national museums to be like.

It exhibits numerous artefacts and has knowledgeable staff. In addition, the location is easily accessible for visitors.