The annual Vegetarian Festival, which begins today, is expected to see an increase of almost 3% in consumer spending from last year, according to the Centre for Economic and Business Forecasting. Life details where to find the best meat-free food in the country

Yellow flags with a red Chinese character flutter all around town signifying that the 10-day vegetarian festival has begun.

"Vegetarian" or jae -- is Chinese-style vegetarianism where food is prepared without a trace of animal meat, including eggs, dairy products or honey, as well as vegetables with pungent odours like garlic, onion and chives. During the festival, most restaurants that normally serve ovo-lacto meatless dishes or menus that contain eggs, dairy elements and veggies usually have exclusive jae menus.

Traditional Chinese-style jae has typical characteristics and is prepared with common ingredients like tofu, tofu skin, textured soy or vegetable protein slices, egg-free flour noodles and mock meat. Traditional jae practitioners usually cook these ingredients by stir-frying or boiling, and this is where many people come to perceive traditional jae food as greasy and bland.

A mecca where people -- young or old, in white or in any other colour -- can celebrate this meat-free festivity and find traditional jae food is the annual Vegetarian Festival in Bangkok's Chinatown, which continues until Oct 21. Yaowarat Road starting from Chinatown Gate (Odian Circle) to Chalerm Buri intersection is closed in the evening and transformed into a vegetarian street fair. The first day kicks off with lion dances and parades. The road is filled with yellow flags and lanterns, the air heavy with grease from woks, with foodcarts and booths lining both sides of the road.

Adding to the taste of excitement are some more playful, flavourful and less greasy items like vegetarian "takoyaki", which is quite hard to find elsewhere, vegetarian larb, nam tok and som tum, Thai-style spicy salad, sukiyaki and pan-fried jae dumplings, to name a few.

Another place in the same area where the mood and flavour of the vegetarian festival is in full swing is Talat Kao Yaowarat, or the Old Yaowarat Market inside Yaowarat Soi 23. Not only are jae ready-to-eat dishes available but also jae ingredients for enthusiastic cooks. Some shops here offer jae food all-year-round.

Besides Chinatown, jae food and ingredients can be found all through the year in various Bangkok markets such as in Talat Noi on Charoen Krung Road, Huay Kwang market and Khlong Toey market. In Talat Noi, a traditional Chinese community with the Chow Sue Kong Shrine in the heart of the neighbourhood, the colour and atmosphere of the festival is also as vibrant as that in Chinatown.

One of the largest vegetarian festivals in the country, the Vegetarian Festival in Phuket is mostly found in the vicinity of the six Chinese temples scattered throughout the province. The main temple, the Jui Tui Shrine, is not far from the fresh market in Phuket Town.

The first event is the raising of the Lantern Pole, an act that notifies the nine Chinese gods that the festival is about to begin. A number of small activities take place such as ceremonies to invite gods and their heavenly troops, or ceremonies to offer foods to the gods and goddesses, but what interests people most is the parade that goes around town. During the parade, various ceremonies will be held to invoke the gods.

Fire-walking, body-piercing and other acts of self-mortification are undertaken by participants acting as mediums of the gods. It is believed that the gods will protect them from harm. A parade of Chinese gods and goddesses will take place daily from tomorrow to Oct 21.

There are more than 40 Chinese shrines around the island. Many of them are small but all participate in the festival, with big ceremonies taking place in Phuket Town.

Takua Pa district of Phangnga province is another destination where tourists love to witness the festival on a smaller scale. Major shrines in Takua Pa include the Guan Yin Goddess Shrine and Kuan U Shrine. A parade takes place every evening until Oct 16.

In Hat Yai district of Songkla province, the festival will take place at Supasarn Rangsan Park. Besides parades, there will also be a lion dance show, a vegetarian cooking demo, beauty contest and vegetarian food fair. The highlight will be vegetarian food from 10 Asean countries.

Some local vegetarian dishes common in the South are nam phrik bai thammang, made with leaves of the Litsea petiolate plant, which provides fragrance of the maeng da (giant water bug), a popular ingredient for nam phrik or chilli paste. The chilli paste is enjoyed with indigenous green caviar seaweed.

Other native ingredients out-of-town gourmands will find during the festival is a variety of vegetables, including bai liang (melinjo leaf), bai proah (sand ginger leaf) and bai po (jute leaf).

During the nationwide altruistic festival, herbivores and do-gooders wishing to comply to the strict jae diet but find the typical carb-loaded, garlic-free cuisine rather unappetising aren't left in gastronomic agony.

Thanks to culinary evolution and globalisation, there are a number of strict vegetarian eateries that serve imaginative jae fare with the flavour profiles of American, European, Japanese, Hong Kong and Mediterranean cuisines.

Dishes are usually a creative unification of traditional jae ingredients with modern-day elements and can taste as sumptuous as their meat-centric counterparts.

You may find the likes of soybean steak well-presented with imported mushrooms and mesclun salad. Quinoe-based beef patty on a vegan "squid-ink" bun. Sushi roll stuffed with imitation crabmeat and non-dairy mayonnaise. Sashimi fish made from konnjaku jelly. Grilled chicken made with layers of tofu and seaweed, in cashew nut "cheese" sauce. Or beef jerky made simply from shredded mushroom stems.

Desserts, too, come in as superb surprise. Pastry is made with almond, soy, walnut, pistachio and coconut milk as a dairy substitute, and can range from ice cream and custard to cheesecake.

Transitioning away from just a religious adoctrine

Chaiwat Chaisomboon started his meat-free diet regimen when he was a freshman at Chiang Mai University. With only a few vegetarian restaurants in his neighbourhood, he considered it inconvenient to carry on.

"Vegetarian food was quite hard to find back then," Chaiwat recalled of the time he studied at the Faculty of Associated Medical Sciences. "Fortunately, there was a place selling vegetarian food at a faculty nearby and a few of them outside the campus. But they were such a rare gem that I decided to cook myself."

It has been 19 years since the 38-year-old became a herbivore for religious reasons. An associate professor at the Department of Medical Technology, the Faculty of Allied Health Sciences at Naresuan University in Phitsanulok province, he finds vegetarian fare more easily available today.

"Vegetarian cuisine has considerably changed in the past decade especially in terms of availability," he said. "These days there are vegetarian restaurants in every province, some more than others. Particularly in Bangkok and Chiang Mai, there are loads of them."

Chaiwat is among vegetarian practitioners in Thailand who enjoy the privilege of having a wider variety of meat-free dishes during the 10-day annual vegetarian festival, which starts today. He still sticks to his spiritual faith, which sees the vegetarian approach as an act of kindness.

According to Supapit Opatvisan, a Thai cuisine instructor at Le Cordon Bleu in Bangkok, people today decide to go vegetarian — both part-time and full-time — for reasons other than religion.

In the past decade, Supapit has noticed that vegetarian diets have been modernised, due to contemporary cooking knowledge, innovations and techniques. In the past a lot of vegetarian food manufacturers focused on creating mock meat to resemble textures close to real meat just to satisfy consumers' palates. Today food producers care more about health and nutritional factors such as applying a proper cooking technique to natural ingredients in order to keep a preferable texture.

This results in more food options, as well as consumers' changing attitudes towards turning themselves into plant eaters.

"Today it's not just about good taste. But it's also about good health," he said. "Modern consumers who decide to either temporarily or permanently become vegetarian refuse the old approach of vegetarianism, which for them means [the consumption of] foods that are oily and tasteless. Mock meat, for example, is still available. But people know that this imitation of real animal meat might not be good for their health. So the trend goes toward natural products — just put no meat in the dishes."

Echoing the same viewpoint on modern vegetarianism is Anotai Gongvatana, founder and owner of vegetarian restaurant Anotai, which has been in the business for 15 years.

She has witnessed a sharp increase in terms of popularity of vegetarian food. She pointed out that people have become more "food literate" and believe that they eat less meat primarily because they are more health-conscious.

"People these days care more about what they put into their mouths, the safety and quality of it," said Anotai, who practiced vegetarianism for four years, but has since given it up.

"With the drive of today's communications, especially online channels like Facebook, consumers are more open to food-related knowledge and alternatives.

"In the past, people considered vegetarian dishes boring, oily and such. But today, thanks to modern restaurant operators, vegetarian food has been made in a way people no longer think is bland. And when people see that vegetarian food equates to good health, it becomes more acceptable."

At Anotai, there has not been much adaptation or modernisation in the menu in the past decade. According to the owner, seasonal items are added to give her diners more choices. But what she, as well as staff, have to adapt to is how to communicate with customers about a meat-free dining approach.

In the past, Anotai added, vegetarianism in Thailand only had a few subsets such as vegan (a person who does not eat or use animal products) and Chinese-style vegetarian (food must contain no animal products, including eggs and milk, as well as vegetables with pungent odours like garlic, onion and chives).

But due to more classifications of vegetarians today, food offered at the restaurant must be customised in order to meet different dietary requirements of different groups of diners.

"Previously we only had vegan and traditional Chinese-style vegetarian," said Anotai. "Today we have vegetarianism where eggs and milk are allowed, people who practice vegetarianism only because they are health-conscious, people with allergies and more.

"We have to adapt and try our best to cater to customers' needs so that we understand their practices and provide them with the right food."

Both Supapit and Anotai strongly believed that the future of vegetarianism in Thailand is positive with more people following a meat-free path.

"Those who want to go vegetarian need to thoroughly study it in terms of health and nutrition such as alternative sources of protein," Chaiwat said. "The key is to eat a variety of diets so that you get adequate nutrients from all." 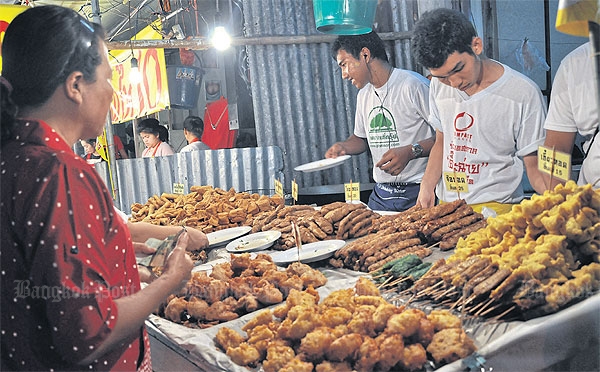