A blue cotton yarn hangs outside a wooden house in the small village of Ban Na Di in Sakon Nakhon province. The blue is made with khram, or indigo, in a long-lost dyeing process that was brought back to life by Praphaiphan Daengchai, 63, about two decades ago.

Praphaiphan's attempts to produce the natural indigo-dyed cloth in 1992 eventually roused people in her community to see the true value of their old weaving traditions. Starting from one group called Mae Teeta, which was founded by Praphaiphan, there are now more than 50 groups of weavers in Sakon Nakhon that produce indigo-dyed cloth for a living, making Sakon Nakhon the star province for pha yom khram (indigo-dyed fabric) in the country.

"It took my mother and I three years to gather knowledge about natural indigo dye and we learned by trial and error," recalled Praphaiphan. She went to markets every morning to find people wearing indigo cloth, but found none. Then she tried to look for old women with mue dam (meaning "black hands", or hands smeared in dark colours) as, she hoped, that would identify the people who knew how to make indigo dye.

She found a handful of old women with the know-how, but all of them had stopped dyeing cloth. She also went to remote villages in many provinces in the Northeast and the North, and even to neighbouring countries such as Laos.

"Indigo-dyed fabric was not popular at that time because people had a perception that blue cotton clothes were outdated. Those who wore them were either farmers or labourers," she said. As a result of indigo-dyed clothes not being admired by the masses and there being more choices of cheaper clothes produced in factories, little by little no one wanted to produce indigo-dyed fabrics for a living.

A study by Sakon Nakhon Rajabhat University found that the natural indigo-dyeing process had disappeared from the province for at least 40 years. After Praphaiphan's late grandmother stopped dyeing indigo cloth, there was a 50-year interim before Praphaiphan began again.

Trying to revive the old, nearly lost local weaving wisdom was not the only challenge, however. Praphaiphan also found that another big obstacle was to find indigo plants. After a long search yielded no success, one day her relative told her about an old indigo shrub -- ton khram -- growing in a rice field. (Khram is in a different family from hom -- Baphicacanthus cusia Brem -- which is widely grown in the North although both plants give the same indigo colour.)

Praphaiphan and her mother asked for the seeds. From that point onwards, they grew the plants in the backyard before expanding the plantation to accommodate up to 6 rai of land, located about a 10-minute drive from her home. Later, Praphaiphan also grew cotton trees as she preferred natural cotton yarn to yarn from factories.

Born and raised in Sakon Nakhon, Praphaiphan graduated from the Faculty of Social Sciences from Chiang Mai University in 1983. She went to Bangkok to find a job as she wanted to be a civil servant or teacher, as her parents did not want their educated daughter to return to be a farmer like them.

She became a teacher for a short while before deciding to seek solitude and became a nun. After eight months in a temple, she was asked to become a research assistant for a team from Chulalongkorn University. The research topic was about applying dhamma to the development of rural provinces.

It was around this time that she began to feel suffocated by the polluted air and rushed life in Bangkok. When she looked at her two little girls, three and four years old, who always got sick, she knew she had to return to her hometown.

"I had to choose the way I live my life, so I went back home with my kids," she said of the decision.

Back home, Praphaiphan began to take an interest in producing indigo clothes. Since Praphaiphan had worn indigo to school, to university and even when she was working in Bangkok she was used to it. The blue clothes were invariably made by her late grandmother, while the white shirts were made of cotton woven by her mother.

So it was sad for her to learn that no one in her hometown produced it anymore. She didn't want the cloth to disappear, at least in her lifetime. After three years of trial and error in the 90s, she and her mother finally learned to produce natural-dyed indigo fabric. Her mother, then 59, agreed to make the natural blue dye despite complaints that she was too old for the job.

As there was no demand in Sakon Nakhon at that time, she decided to drive a pickup loaded with natural blue fabric and produce from her farm, such as rice, mangos and bunches of bananas, to Bangkok. She sold them at weekly and bi-weekly outdoor markets in Chulalongkorn and Kasetsart universities.

Mae Teeta, the group of weavers she founded, has only ever produced one type of cloth and the colours are just blue and white. The operation remains the same, with the cloth produced at the back of her house, where more than 30 pieces of pottery are put on two long tables. Each pot contains organic indigo dye.

The liquid is a dark green colour. When the yarn is dipped into the container, it gradually turns indigo after the air starts to oxygenate the yarn. The more dips into each vat, the darker blue the yarn becomes. This is called the cold-dyeing process.

"Cloth with blue and white is not admired by everyone, perhaps one out of 10 of those who show interest," she said.

Since Praphaiphan set out her temporary stall in the markets of the universities in Bangkok, her major customers were academics and those who wanted to support local-made products or loved simple design and the softness or her cloth and scarves.

During the early years, she had to learn to be patient as people had a negative perception of blue cloth -- chiefly that the cloth was out of fashion and always discoloured.

"Discolouring always happens to chemical-dyed cloth as it needs to be boiled for the dyeing process, but the cold-dyeing process of khram gives my cloth a long-lasting blue colour," she said.

To change people's perceptions, however, required a strong commitment.

"When I opened my stall about 20 years ago, I had to hand out copies of my ID card to my customers to guarantee that the colour would not fade away. I told them that if it did, to inform the police to catch me at that address," she said.

Another typical question she is asked, even to this day, is why her home-made fabric has high prices, starting from 400-1,000 baht per metre. A shirt, meanwhile, is priced at around 3,000 baht.

She reasons that the Mae Teeta Group produces only eco-friendly, handmade products. The group members grow their own indigo plants and cotton trees, spin cotton yarn, and dye each thread with natural indigo dye before weaving them to cloth.

It takes time, effort and a long process to produce one environmentally-friendly piece of cloth, thus the prices justify the cost.

The natural indigo-dyed cloth also has a unique odour.

"The scent is like fermented leaves. It gives a pleasant smell and does not hurt your nose or eyes unlike cloth dyed by chemical products," she said.

"I can wash our yarn in the stream near our home without fear that it will pollute our water. I can even see fish swimming around us when we wash them out from the yarn," she said.

Mae Teeta products were certified by the government as a four-star One Tambon One Product (Otop) in 1997. Later, it was certified as a five-star Otop and premium Otop product of Sakon Nakhon.

Over the years, Praphaiphan has been invited by many parties to share her knowledge and experiences with other interested communities as well as in the Support Arts and Craft International Centre, Thailand Creative & Design Center and universities.

Her mother, Teeta Chanphengphen, has received various awards including Artist of the Northeast and an honorary doctoral degree for her notable contribution to preserving the traditional and natural indigo dye. Praphaiphan has also opened her home as a learning centre to share her knowledge with visitors.

The perception of indigo-dyed fabric has also changed from just being cloth for farmers to being for educated people as well. Civil servants in Sakon Nakhon are even encouraged to wear indigo clothes every Friday.

"What I'm most proud of is that I have brought the long-lost traditional way of natural indigo dye to our community.

"I'm glad that the effort has also helped other people to have a stable income. They don't have to leave their home and families to work in the city any more. This makes me feel grateful," she said.

1992 Praphaiphan asked her mother, Teeta, to help her make indigo-dyed cloth as she liked the blue cotton fabric and wanted to make the cloth for a living.

1995 After three years of trial and error, Praphaiphan and her mother produced natural indigo-dyed fabrics to sell in Bangkok and Chiang Mai. She asked her mother to write down her name and used her signature as the product trademark.She also founded Mae Teeta Natural Indigo Dyed Woven Cloth Group with the support of 15 members.

1997 The Mae Teeta product was certified as an Otop product of Sakon Nakhon. Mae Teeta joined international trade shows in a number of countries, including Japan and the US, for quality products from Thailand. The success intrigued other communities to follow suit.

2004 Mae Teeta products won Prime Minister's Export Award. Praphaiphan visited textile factories in Italy and the US and the experience showed her that handmade products can beat those of factory-made clothes.

2009 Her nephew, Narawut Chaichompoo, and his partner introduced indigo-dyed T-shirts under the Walk On the Wild Side brand to target the young generation.

At present Mae Teeta has also extended its colour range from indigo blue to other natural extracts, such as green from mango leaves and brown from ebony.Mae Teeta Group produces more than indigo cloth and scarves. They also have fashion clothes designed by Praphaiphan's eldest daughter Sukajit Daengchai, 27, who graduated with a fashion degree from Chanapatana International Design Institute.Mae Teeta's products include outdoor fashion for men, dresses for women, jackets, bags, hats and caps. 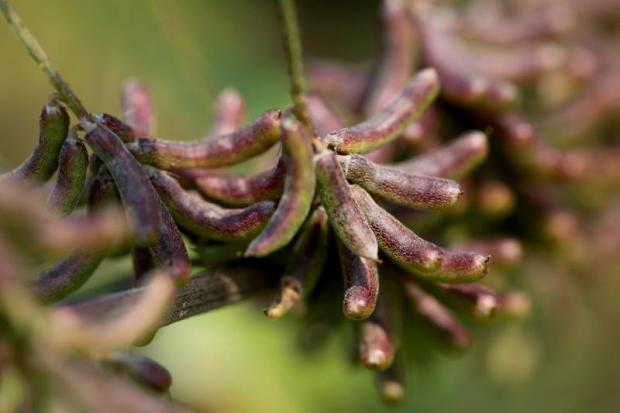 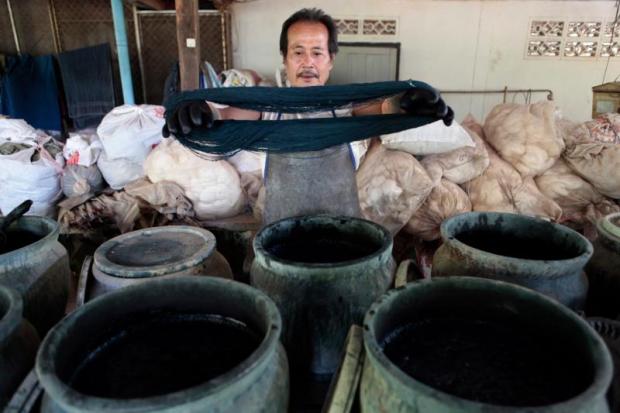 Kueng, an older brother of Praphaiphan, washes the yarn in at least eight pots to get the blue colour. 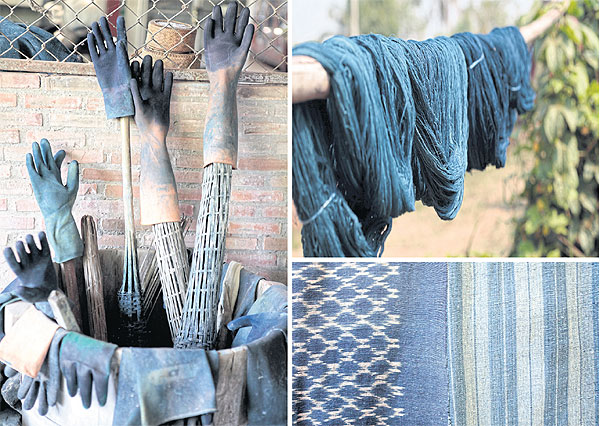 Yarn is dyed in indigo liquid before being woven into a cloth.