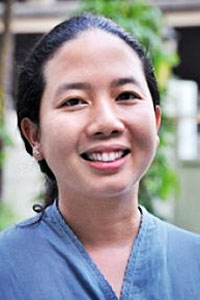 Today is a 'Day of Action for Rivers'

On a sandy beach by the Salween River on the Thai-Myanmar border in March 2006, boats carrying Karen villagers and other ethnic groups such as Karenni, Yintalai and Shan from various areas in the Salween Basin are arriving to join an important yet simple ceremony.

'I can't figure it out. Thai officials told us to leave and [we'll] probably have to end up living in the forest. We need to squeeze ourselves among the cracks of the ravines to keep ourselves safe from airstrikes by the Myanmar army," Naw Lay Bue, a Karen housewife with her three-month-old baby in her arms, told me in an interview in March, a few days after she and other villagers fled to Thailand following air raids launched by the Myanmar army in Karen State.

Soithip, an ethnic Karen-Thai woman from Bang Kloi in the Kaeng Krachan Forest, was among 22 villagers who were rounded up last Friday by state authorities and put behind bars at the Phetchaburi Provincial Prison. Returning to their ancestral land in the forest is a crime in the eye of the state.

Over the past few months, the Irrigation Department and the House Committee Review of Integrated River Basin Management have been heavily promoting an inter-basin water diversion scheme. Planned projects will divert water across Thailand, incorporating international river basins, including the Mekong and Salween, to address "water shortages" in Thailand.

Muesaw Chokedilok, an ethnic Karen woman from Thailand's Kaburdin Village in Chiang Mai's Omkoi district, hops aboard an old pickup truck for a rugged ride up the mountain. With her are a group of housewives from the same village, all clad in cotton handwoven clothes with beaded lace and colourful headscarves. They are on the way to meet a group of journalists from Bangkok. Their village is at least four hours by car to Muang Chiang Mai.

The Supreme Administrative Court will hear a lawsuit against the Pak Beng dam in Laos, acknowledging Thai responsibility to consult on cross-border projects.

Plans to meet future energy needs centre on controversial projects in Myanmar and Laos and do not account for decreasing demands.

As Thailand expands its economy within the region, it is critical to protect the rights of local communities and the environment in neighbouring nations.

To get more electricity, Egat and the government disregarded human rights, the significance of the Salween and livelihoods of its communities.

Aung San Suu Kyi hopes for key investments from Thailand, but the Myanmar leader must consider the environmental costs of Dawei and hydropower projects.