Every computer is a crime scene
Tech

Every computer is a crime scene

Point of the spear: The new Computer Crime Act cleared the National Assembly despite strong opposition.

Thai democracy on Friday showed that 168 votes easily defeats 350,000 votes. The green shirts who promised to return happiness to the people handed it to themselves, and called it a New Year's present that will never stop giving back.

The new Computer Crime Act (CCA 16) replaces that old, worn-out CCA 07. Sure, the old one put a lot of people in prison for a lot of years, but not enough and not long enough. Authorities had to go to court and stuff, and now they won't have to do that very much.

But don't worry, because if you have nothing to hide and you're not doing anything wrong, you have absolutely nothing to fear from the world's vaguest computer law. And that's straight from the deputy prime minister in charge of security.

In the new atmosphere, post-succession, the current ruling regime is stressing slights to the monarchy as never previously seen in Thailand. CCA 16 is going to be the point of the spear in that campaign.

That was not, however, the intent of this hugely opposed new law. It is simply to move along the prime minister's order given early last year to establish a single internet gateway, to pipe every bit and byte of online traffic through a single tube. The government, in its wisdom, wants to look at everything. It now is official that the country consists of 65 million suspects. And to be honest? The government's not entirely sure about the 3 million tiny babies either.

The 350,000 citizen/suspects who voted before the NLA vote to oppose CCA 16 at the Change.org petition at this link never really had a chance, of course. After the nation's Chief Aerobics Instructor sent instructions in April of last year to prepare China-style firewalls on the internet, everything else followed neatly.

The decisive 168 votes and five abstentions were cast by members of the same, well-paid National Legislative Assembly that the prime minister once warned the media never to call a "rubber-stamp assembly". So we can report this independent body voted completely from its conscience.

In addition to the 350,000 (and counting) votes by petition, the business community now is both officially appalled and fearfully quiet. CCA 16 allows any government official (including 600,000 baht-per-year "advisers" to beer companies) to walk into an internet provider and say: "Give me all your records on all the other beer companies." For example. CCA 16 eliminates the pesky inconvenience of getting a court order and establishing a written record of such deals.

That deputy prime minister in charge of security, Gen Prawit Wongsuwon, said Thailand is in dire need of a single-gateway internet system to be safe from foreign invasion, and it should be ready soon. 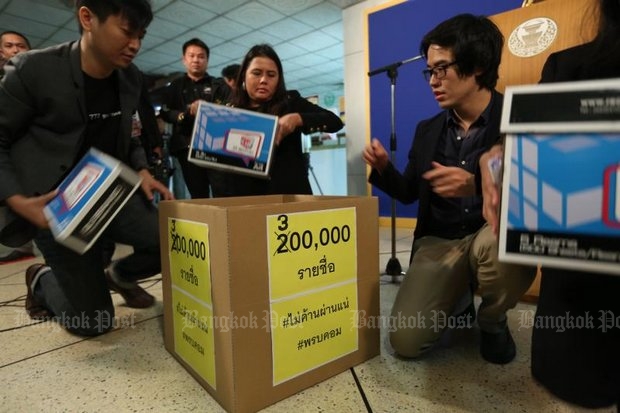 Sarinee Achavaknuntakul and colleagues from the Thai Netizen Network submitted a petition with more than 300,000 online signatures, opposing the new Computer Crime Act -for all the good it did them. (Photo by Chanat Katanyu)

The handsome celebrity minister of truth and government spokesman Lt Gen Sansern Kaewkamnerd laughed and laughed, and said that Gen Prawit is so wrong! The government never even has thought of having a single gateway for the internet.

That is a startling memory-hole attempt of the government's own quite secret and embarrassing documents. Discovered and revealed last year, they contained plans and justification to be used for a single gateway. All government spokesmen are therefore invited to read the attractively and professionally illustrated "Foxes drafted for henhouse duty" from the Bangkok Post Sunday of Oct 4, 2015, plain text available online at goo.gl/QOeRNg.

Amidst the uninformed statements, here's the thing: CCA 16 makes every computer a potential crime scene. Already, a man is under arrest for providing a link on Facebook to an article that Gen Prawit and Lt Gen Sansern both hated. Will there be more of that? Do bears do business while squatting on flat rocks?

He then brought a few chuckles of his own when he rose after the passage of CCA 16 and said: "I can reassure that this law is important and necessary but will absolutely not violate personal rights."

That's pretty rich, seeing as how the purpose of the law is specifically to intimidate and/or punish freedom of speech and freedom of information. Similarly, the Constitution Ver 2 on the cusp of final enactment contains restrictions of personal rights and freedoms, with equal vigour and vagueness.