If coal plant rises, house of cards may fall
Opinion

If coal plant rises, house of cards may fall

Just a day after activists protesting against a coal-fired power plant in the popular resort town of Krabi dispersed following the government's agreement to have the project's environment and health impact assessment (EHIA) reviewed, Deputy Prime Minister Prawit Wongsuwon insisted the power plant will be built no matter what.

What is the point of having the EHIA redone when the decision that the project will go ahead has apparently been made?

Besides, the EHIA for the Krabi power plant has not been approved by the responsible agency, the Office of Natural Resources and Environment Policy and Planning (ONREP). According to a report from PPTV, the ONREP said the Electricity Generating Authority of Thailand (Egat) which is in charge of the Krabi power plant project, withdrew its EHIA from consideration by the ONREP's panel of experts two years ago.

Egat has also gone ahead and awarded a contract to build the 32-billion-baht plant to a consortium of Power Construction of China and Italian-Thai Development, according to news reports.

So what should people make of the message from the PM relayed by government spokesman Sansern Kaewkamnerd that a new EHIA will be prepared with an emphasis on public participation?

If the project is pre-determined to proceed as stated by the Gen Prawit, it should be presumed that whatever the public has to say about it will not make any difference.

People can be against a project which builds a 280-metre sea port and 380-metre bridge running through wetlands recognised as worthy of conservation by the Convention on Wetlands as a Ramsar site. They can raise concerns over the 8,000 tonnes of coal a day needed to generate the electricity that Egat and the government have insisted is necessary to ensure power security in the South. They can question the plant's safety and sustainability. They can stage protests.

And all the government says is that it has taken their input into account but deemed the 800-megawatpower plant necessary. What difference would the so-called public participation make? Is there any point in having the EHIA reviewed when the plant will be built anyway?

It's possible Gen Prawit misunderstood the EHIA as another box that must be checked before the megaproject can get off the ground. But as far as international standards are concerned, an EHIA is a key process that determines whether or not a project can be pursued.

If impacts of a project outweigh its benefits and can't be mitigated, or if there are better, more cost-effective alternatives, the scheme must be suspended or scrapped, according to international practices. But if the project is to go ahead either way, as seems to be in the case with the Krabi plant, an EHIA, no matter how many times it is done, will only be there to justify its construction.

Maybe there is some basis in the argument being made by both en Prayut and Gen Prawit that there is a lack of understanding between local residents and activists protesting against the coal-fired power plant and the government. 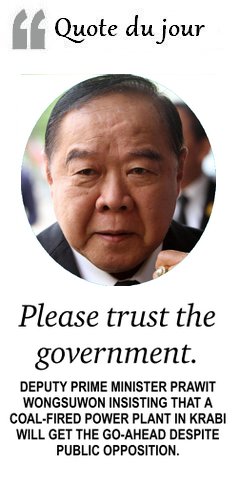 While both sides seem to agree there is a need to meet an ever-increasing demand of about 100MW of electricity per year in the South which consumes more power but has fewer plants than other regions, the government insisted that coal is the only option while opponents have urged that more environmental friendly or renewable energy alternatives be considered.

Gen Prawit begged the public to trust the government which is obliged to take care of the people and maintain energy security in the future.

Frankly, his statement that the government will proceed with preparing an EHIA as required by law but that the coal-fired plant will be built eventually is empty of logic. His assertion that there are several grades of coal and some don't produce any pollution cannot be trusted.

As the military regime nears an exit, its promise to pursue the "public interest" is being increasingly tested. The raid of Wat Phra Dhammakaya is likely to cause more rifts among monks and society whether or not the former abbot is found. The government's attempt to slash about 13 billion baht from the popular universal healthcare scheme while approving about the same amount for submarines is unlikely a pursuit of public interest. With more controversial decisions being made, the risk that the house of cards will come crashing down is rising.