Goosestepping police have threatened they are going to 'patrol' social media, looking for every photo of alcohol, with or without someone holding it. (Bangkok Post file photo)

At first, I thought a reporter at a mass-circulation newspaper who covered a police warning on members of the public not to post pictures of themselves with booze on social media got it wrong.

In the report which appeared in Thai Rath newspaper over the weekend, a police officer said anyone posting alcohol on social media should be aware they face tough legal action -- a maximum of 50,000 baht fine for the first offence, and another 200,000 for a repeated act. But follow-ups to that story made me realise I was wrong, he is quite serious.

Pol Gen Veerachai Songmetta said police will take those pictures as a commercial promotion of the alcohol brand, which is a violation of the Alcohol Control Act.

It is an extension of the legal action which police took against some movie stars and net idols who posted pictures of themselves and alcohol beverages on their Instagram or FB accounts. DJ Pakorn "Dome" Lam and a few other showbiz personalities were punished for posting pictures of themselves with Chang Beer in 2015. Pakorn and others claimed they didn't realise it was illegal and promised to delete the pictures.

I didn't sympathise with Pakorn and those stars. But legal action against ordinary people for sharing a good time with friends? This is ridiculous. It seems Pol Gen Veerachai and his team have too much time on their hands. 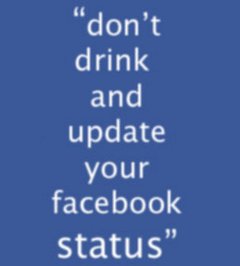 In the news report, the police general seems determined to tackle law violators indiscriminately. He even suggested a grace period. "Delete them now, and police will not take any action, but otherwise, prepare for hefty fine." Police should realise there is a huge grey area related to how they decide who is in the wrong. Someone needs to interpret to determine if a picture of people drinking alcohol really amounts to a booze commercial, especially when the posters are not well-known.

It might be a time-consuming process -- perhaps as hard to prove as the case involving Metropolitan Police commander Sanit Mahathavorn, and whether he received a 50,000 baht monthly payment as an "adviser" from a beer giant, the same company involved in the Pakorn-Chang scandal.

In his asset declaration before taking a seat in the National Legislative Assembly earlier this year, Lt Gen Sanit listed the payment in his statement, before retracting it, saying it was just "a mistake". Lt Gen Sanit was lucky the anti-graft body and other state agencies believed him, but public suspicions still remain.

It seems we are never short of such suspicions where the police are concerned. Remember the case of Pattaya police arresting 32 elderly members of a bridge club for "gambling" earlier last year? That drastic act made police a laughing stock, should we manage to laugh it off. Then the Pattaya police chief defended his officers, saying they were "just doing their duty".

In principle, we should be glad when police are eager to perform their duty. But there are always reasons for us to be sceptical, especially when the laws give them too much unchecked power. As we all know too well, the more rules there are, the bigger the chance for bad officers to unlawfully fatten their pockets.

But unfortunately the anti-alcohol laws have given some unscrupulous officers the chance to do just that. There are too many dubious "Nos" that enable police to take an advantage of the innocent public. One of them is a regulation prohibiting passengers from drinking alcohol while boarding a vehicle -- a desperate-yet-silly move to deal with drink driving.

Last year, I learned of this weird law from a Bangkok court officer. He said quite a few foreign tourists were arrested and sent to the court each month for drinking while boarding public vehicles, mostly taxis and tuk-tuk (just holding a bottle of beer could mean trouble).

We know this particular regulation is aimed at closing a loophole that may give some drunk drivers an excuse to escape the arm of the law. But foreign tourists sharing a drink with a taxi or tuk-tuk driver?

The court officer told me he felt pity for those unlucky tourists whom he believed were innocent. But as the law gives the police such power, he could not do anything.

Are those zealous officers performing their duty honestly? Or did those foreigners refuse to pay tea money?

Back to the issue of social media posts, Pol Gen Veerachai should know that while police have yet to fulfill public expectations in some high-profile cases which remain outstanding, being too zealous over trivial things will make police a subject of derision.