It's the regime itself most in need of reform
Opinion

It's the regime itself most in need of reform

In theory, the appointment of 11 reform committees this week should make us feel optimistic about long-awaited national reform. But in reality, we don't quite feel that. 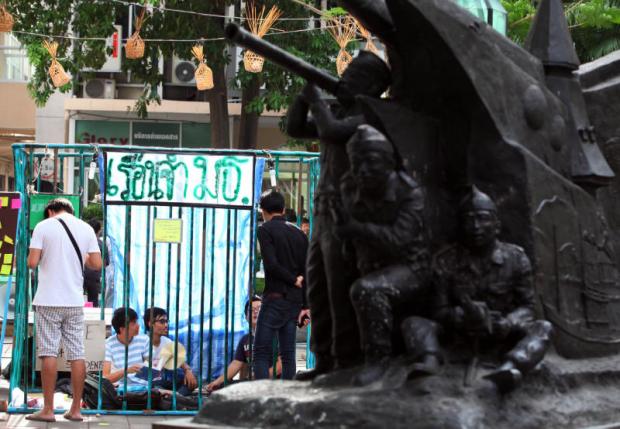 In this 2015 photo, pro-democracy activists sit in a mock cage to symbolise the arrest of their friends. The military regime resorts to threat and intimidation in handling those with different opinions. Bangkok Post photo

For one thing, we have to admit that the composition of the reform committees does not give us much optimism, let alone hope. There are several old faces who live in their old autocratic world, while many had been in lofty positions before. Had they seen the virtue of reform before, they would have done it and we would not have had to go back to square one -- again and again.

Another thing, it's matter of bad timing. The panels' birth was announced at the same time we are witnessing the misuse of state power to suppress academic freedom. I refer to the acts of police in Chiang Mai who summoned a group of academics and activists involved in an incident at a forum on Thai studies last month to face the charge of breaching the regime's ban on political gatherings.

During the forum, there were complaints about improper acts by plainclothes police which were seen by forum participants as attempts to intimidate them. Eventually, Thai lecturers and their foreign colleagues read out a declaration calling for the military regime to recognise academic freedom. Some held up a placard, "An academic forum is not a military camp", which was posted widely on social media.

According to Thai Lawyers for Human Rights, those facing charges include Teeramon Buangam, a master's student at Chiang Mai University and editor of Prachatham News; respected scholar Chayan Vaddhanaphuti, director of the Regional Centre for Social Science and Sustainable Development at the university; Chaipong Samnieng, a lecturer at the Department of Sociology and Anthropology; Pakawadee Weerapaspong, an independent writer and activist; and Nontawat Machai, an undergraduate.

Mr Teeramon told the Prachatai news website he received a summons which states that he and the other four are accused of violating the National Council for Peace and Order (NCPO) chief's Order No.3/2015, the regime's political gatherings ban of five or more persons. It is reported that it was Col Suebsakul Buarawong, deputy commander of the 33rd Military Circle in Chiang Mai, who filed the complaint against them with local police.

This is not the first time we've heard of state intimidation against those advocating academic freedom and freedom of expression. The form may be different, but the goal is just the same: to silence those with different opinions.

In one incident, a young student activist complained that a rogue military officer turned up at his school and threatened him over his stance on education reform. Elsewhere, there were reports of police and soldiers storming into public discussion forums even though the topics had nothing to do with politics.

But accusing those attending an academic forum of defying a ban on political gatherings is just a dirty tactic. Obviously, those who decided to do it must have acted out of paranoia.

Whatever the reason, this has raised quite a few questions: How can we achieve reform when the state still treats those who voice concern about public issues as its enemies?

How far can we go on this reform path when the authorities use all the mechanisms they can to muzzle the people?

With a new charter in place, we had hoped that the regime would ease restrictions on political activities, at least those in the form of public discussion. Yet, we are stuck with a regime that still wants its citizens to be blindly obedient and follow its orders without question. Is that healthy? I think not.

If the NCPO wants reform, it must create a climate of reform, not a climate of fear. After remaining in power for more than three years without any real challenge, the regime should feel secure enough and consider opening up. Like it or not, it may be a good tactic to avoid reaching a political boiling point leading to the regime's fall into disgrace.