Long infamous as the drug-trafficking centre of Southeast Asia, the region where Laos, Myanmar and Thailand converge now has taken on an even more sinister character. (File photo)

The area is a living example of an illegal playground where drug kingpins and triad members rub shoulders. Notorious figures often include high-profile drug traders wanted by governments. For example, Nor Kham, a drug kingpin who was executed by the Chinese government in 2013, for the Mekong massacre in which 13 Chinese sailors were gruesomely murdered, was known as a big shot there.

The Golden Triangle has recently become a new market for illegal products -- endangered species such as parts of tigers, elephants, bears and pangolins, according to a report that exposes the illicit wildlife trafficking in the area.

The report is entitled "Top 10 Most Wanted: Endangered Species in the Markets of the Golden Triangle" and the full version can be read or downloaded here, in PDF format. It was produced jointly by two non-governmental organisations, WWF and TRAFFIC, the wildlife trade monitoring network.

It said tourists from China and Vietnam travelling to areas such as Mong La and Tachilek in Myanmar, a border town opposite Chiang Rai, and border areas such as Boten and the Golden Triangle Special Economic Zone in Laos, buy or consume products made from these endangered species.

According to the report, tigers, elephants, bears and pangolins are four of the most widely traded species. Do not just imagine they are traded as live exotic animals! Products vary -- skins for decoration and meat or organs for delicacies believed to help treat diseases or even boost virility.

Other products are made from rhino, serow, helmeted hornbill, gaur, leopard (for skin and heads for status symbol decorations) and turtles whose shells are sold as decorative items, and meat as ingredients for soups or stews.

These illicit products come from various destinations -- Southeast Asian countries or even as far as the African continent.

The report said Laos and Myanmar are not so vigilant in tackling the problem. Myanmar is becoming an emerging source of poaching while Laos is the world's fastest growing ivory trade market where 80% of buyers are Chinese tourists.

Such information may make Thai officials tasked with anti-wildlife trafficking sigh with relief as neither market is on Thai soil. However, it is undeniable the country is still part of the trade as it lies on smuggling routes.

Some may recall the "tiger temple" in Kanchanaburi, a tourist attraction that was believed to have illegally supplied wild tigers to the market. This speaks volumes about the need for the government to strictly regulate privately owned zoos. 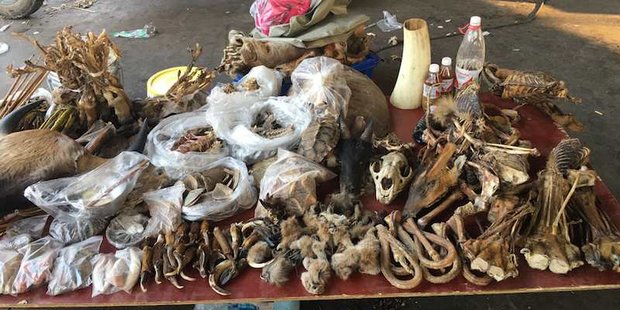 First, we must change our beliefs about buying such products. I strongly believe many people learn to consume products made from wildlife animals through family practices, or from friends out of old beliefs that they benefit their health or to boost their social status.

So we can start by making sure our education system teaches students about science as well as imbues conservation awareness, so they will not fall prey to these myths and unproven medical beliefs.

But the truth is the trade of tigers, elephants and bears in the Golden Triangle goes beyond culture and morals. This illicit trade involves power, money and the underworld. According to this report, the profits from illicit wildlife trafficking are staggeringly high. For example, the ivory and pangolin trade in the Mong La market amounts to US$4 million (132 million baht) and wildlife is the fourth-most lucrative illegal business globally.

At this point, I am afraid the problem will get out of hand if governments in Laos, Myanmar and Thailand continue to drag their feet or do nothing. Wildlife traffickers have also found the perfect market conditions.

The Golden Triangle's mountainous areas provide hiding places and ideal routes to escape law enforcement. And failing to crack down such trade means more wildlife species will be hunted and face extinction sooner rather than later.

The circumstances seem to greatly benefit drug producers and smugglers. Apart of making or selling ya ba, they may move into new businesses as a sideline, such as selling tiger carcasses or ivory to tourists -- giving them another chance to make a lot of easy, dirty and bloody money!