Vitit Muntarbhorn is a Professor Emeritus at the Faculty of Law, Chulalongkorn University. He was formerly a UN Special Rapporteur, UN Independent Expert and member of UN Commissions of Inquiry on human rights. (File photo)

A pre-Chinese New Year present from the government was Prime Minister Prayut Chan-o-cha's proclamation of the government's human rights agenda to complement the Sustainable Development Goals (SDGs) and Thailand's "4.0" target to become a more developed society. Beyond the formalities, what are some of the stakes?

The agenda, approved by the cabinet last November, is based upon a rather catchy "4 + 3 + 2 + 1 points" strategy. It is aimed at government agencies and their relationship with the population.

The "4 points" refer to four types of action "to build". The first one is action to build awareness for human rights, particularly to promote respect for rights and duties, such as through education.

The second action is to build a system to monitor violations with a view to prevention and cure, such as to set up human rights centres throughout the country.

The third is action to foster a culture to respect and protect human rights, such as though involvement of the business sector.

And the last one refers to action to develop networking for human rights work, such as to support human rights volunteers. 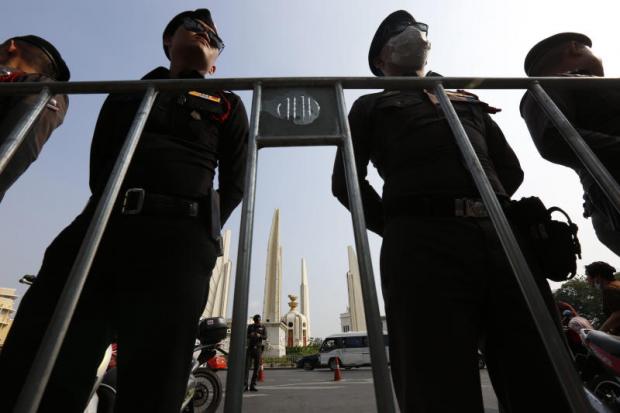 Metropolitan police set up barricades around Democracy Monument to prevent pro-democracy activists from occupying the road. (Photo by Pattarapong Chatpattarasill)

The "3 points" advocate actions to "improve", particularly to develop an information system on violations; adjust the attitude of officials on human rights issues, such as through good leadership examples; and reform laws which still infringe human rights and ensure that national laws are consistent with human rights treaties and conventions.

The "2 points" are linked with actions to "mobilise", namely, to support various provinces as a model for human rights development, such as through exchange of experiences, and to interconnect human rights and innovative activities, such as through creative implementation of the National Human Rights Action Plan.

Thailand is at the tail end of its 3rd National Human Rights Action Plan (2014-2018) which focuses on action to help some 15 groups, including detainees, drug addicts, children, women and those in a situation of poverty.

Then there is the "1-point" agenda which is to "reduce" human rights violations continuously, such as through situational analysis and follow-up actions by all agencies.

How then to ensure that the implementation of the government's national human rights agenda responds to the realities?

Perhaps the first reflection is to nurture an understanding that "rights" are not necessarily the same as "human rights".

While the former represents "what we are entitled to have", which can be based on a relationship between two individuals, "human rights" are based on a claim by individuals and communities at least advocated to the state. It is the primary responsibility of the state to protect human rights and there are international standards to comply with.

Those standards are laid out particularly by the UN and various human rights treaties. Thailand is currently a member of seven human rights conventions, covering civil and political rights; economic, social and cultural rights; anti-racial discrimination; anti torture; women's rights; child rights; and rights of persons with disabilities. All these treaties have monitoring committees which consider Thailand's report on the matter and they have issued various recommendations which need to be followed up in a more robust manner.

There is also the peer review process in the UN, known as the Universal Periodic Review, under the UN Human Rights Council, and independent monitors under the UN umbrella, such as the Working Group on Business and Human Rights, due to visit Thailand soon.

A key challenge is that some of the authorities tend to emphasise human duties rather than human rights, and at times there is a twist behind this.

When they say "rights", what they mean is that the public should follow the law of the state ("The duty to respect the rights of other people as laid down by state law") rather than protection of human rights from infringement by the state and related power groups premised on international standards.

There is also the weakness that officialdom sometimes fails to see that human rights are based on non-discrimination.

Internationally, however, all those rights are indivisible and interconnected.

The matter does not rest there, either.

There is a tendency in less open society for those in power to claim broad discretion to constrain human rights, whereas international standards indicate that some rights, such as the right to life and freedom from slavery and torture, are absolute and cannot be limited even by claims of national security and emergency laws.

On another front, while many rights, such as freedom of expression and assembly, are not absolute and can be constrained, there are international parameters for what is permissible as a constraint.

Constraints on human rights must fulfil various tests. For example, they cannot be arbitrary and must be based on law that complies with international law.

They also need to be necessary and proportionate to the risks.

In addition, they have to follow what is permissible in a democratic society.

Evidently, a prohibition imposed on five or more people who wish to congregate peacefully does not comply with those parameters.

A law forbidding critique of state institutions, possibly under the heading of sedition or similar categories, also needs to be consistent with those parameters.

Issues of defamation and casting aspersions on reputations should be dealt with by civil law rather than criminal law.

Self-determination as a human right also calls for free and fair elections without the excuse of procrastination.

Thailand's record has been commendable on various fronts, such as its longstanding open policy to helping people living with HIV/Aids (currently to eliminate totally mother-to-child transmission of the disease); its healthcare programme for the general population, colloquially known as the 30-baht medical care scheme; its improved law enforcement against human trafficking, especially in acting against high-ranking personnel involved in the practice; and its fulfilment of the Millennium Development Goals, such as to halve the number of the poor, preceding the advent of the SDGs.

Now is the time to respond to the puzzles above to ensure that the country gives true content to the promise of this proclaimed national agenda and implement human rights comprehensively, embedding peace and democracy concurrently.

Vitit Muntarbhorn is a Professor Emeritus at the Faculty of Law, Chulalongkorn University. He was formerly a UN Special Rapporteur, UN Independent Expert, and member of UN commissions of inquiry on human rights.