Too many cover-ups in the Land of Smiles
Opinion

Too many cover-ups in the Land of Smiles

The past week was dramatic for three unusual events -- the truck bashing with an axe by a very frustrated woman, the shocking inexplicable rejection of all seven final candidates for the Election Commission by the National Legislative Assembly, and the abrupt transfer of the permanent secretary of the Ministry of Social Development and Human Security and his deputy over the plundering of funds for the destitute by Prime Minister Prayut Chan-o-cha.

The truck bashing incident which was seen in full view in social media -- thanks to the advent of smartphones -- surprisingly has attracted many sympathetic supporters for the "axe lady", Boonsri Saengyoktrakarn.

Meanwhile the girl whose truck was bashed was criticised for being selfish for blocking the entrance to the house of the "axe lady" with her pickup truck while going shopping in one of the illegal markets in the Seri Villa housing estate.

It took a very frustrated woman with an axe and the power of the social media to shake Bangkok governor Aswin Kwanmuang out of his deep sleep and inertia and open his eyes to the dirt which had been gathering under the rug for quite a long time -- about 10 years in the case of the "axe lady".

No doubt, Mrs Boonsri was wrong to take the law into her own hands and vent her pent-up vengeance on the truck which was parked right in front of her house.

But when you heard about what she and her family have endured for the past several years and the complete inaction of officials of Prawet district office and police to mitigate their hardship or just enforce the law as they should have done, you would understand her and forgive her for her attack on the truck.

Belatedly, the governor rushed to the rescue and ordered three of the 5-7 markets in the neighbourhood of the housing estate closed after it was discovered they were built without licences.

He also ordered a check of all 300-plus fresh markets in Bangkok to find out if any of them are illegal while the Prawet district administration was placed under investigation.

Whether any officials, especially the district chief officer, will be punished or whether the probe will be a whitewash is yet to be seen -- not in the foreseeable future, though.

Personally, I don't have much faith in the investigation without the participation of outsiders. 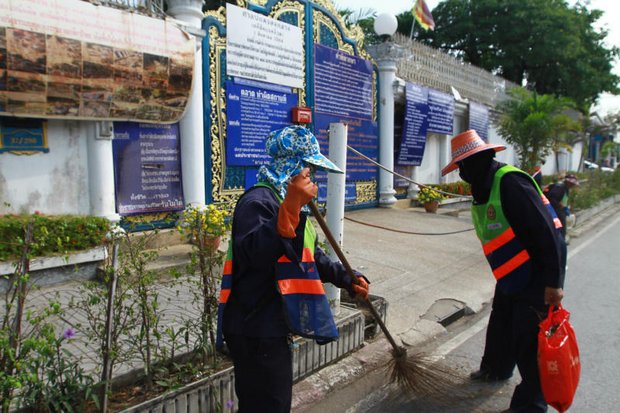 City workers and police were out in force in front the heavily posted home of two women who just couldn't take it any more and went after a pickup truck blocking their driveway entrance with a spade and an axe. (Photo by Somchai Poomlard)

This was just one of the cans of worms which was accidentally cracked open by the "axe lady" and -- mind you -- only a few worms have crawled out. If all the worms had crawled out, I wonder how many officials in the district offices and the city administration would be left intact.

Now the plunder of the fund for the destitute which, so far, has claimed two "big fish", the permanent secretary and his deputy, who were transferred to the PM's Office to facilitate the probe of all 37 centres for the protection of the destitute by the Office of the Auditor-General and the Public Sector Anti-Corruption Commission.

I guess many people have heard about Robin Hood of Sherwood forest who robbed from the rich and distributed the spoils to the poor.

But in our land of smiles, corrupt officials rob from the destitute such as Aids sufferers to enrich themselves without any sense of shame or guilt.

Like the truck bashing incident, the rot in the 37 centres for the destitute would have been covered up for how many years if it had not been exposed recently by a few students of Maha Sarakham University who went to work at the centre in Khon Kaen as trainees.

One of the whistle-blowers, Panita Yospanya, told the media she and her colleagues were told by the officials there to fill in 2,000 blank receipts of payments for Aids sufferers, each of whom was supposed to receive 2,000 baht each.

But the truth was that several of them did not receive any money while the others received only some of the 2,000 baht they were supposed to get.

Cheating Aids sufferers: how disgusting are these officials!

Now the shocking drama at the NLA last Thursday.

Despite the junta's insistence that it has nothing to do with the NLA's shooting down the list of seven final candidates for the Election Commission, I personally believe the contrary is true.

These days, there is no need for a written instruction to the junta-handpicked assemblymen on what they should do.

A wink of the eye or a thumbs-down signal from someone powerful should suffice.

Put simply, this is just another delaying tactic to put off the election like the amendment to the election bill for MPs which specifies the bill will be enforceable 90 days after its publication in the Royal Gazette.

The reason reportedly cited for the overwhelming votes to reject the candidates is that they have no experience in handling elections.

Well, do Prime Minister Prayut and his band of brothers from the army have the experience in running the country?

Do many of the NLA members have experience in parliamentary affairs?

Spare the selection committee the trouble of starting the selection process over again and the uncertainty over whether their proposed candidates will be voted down again.

Just give them a list of the kinds of people the junta wants to sit on the EC.

Or just give them the names of seven people the junta wants to be the election commissioners. That would be much easier!

The rot in government bureaucracy as reflected in these incidents shows just part of the corruption problem in this country and the delaying tactics to put off the election speaks volumes of how little has changed for the better after almost four years under the Prayut administration.

And I don't think the government's recently-launched Thai Niyom Yangyuen development project will help turn around the situation for us or for the regime.

KAOHSIUNG, Taiwan: Taiwan unveiled a new amphibious warfare ship on Tuesday that can be used to land troops and will bolster supply lines to vulnerable islands offshore China and in the South China Sea.

NEW YORK: Johnson & Johnson said Tuesday it will delay rollout of its Covid-19 vaccine in Europe after US authorities moved to suspend use of the shot due to health concerns.

BERLIN: The United States will increase troop levels in Germany as part of a commitment to closer ties, Defense Secretary Lloyd Austin said Tuesday on his first official trip to Europe.