This is what drivers near Khon Kaen encountered on Sunday, as sugar cane farmers conducted 'pre-harvest burning' of their crops. (Post Today photos)

As provinces battle with hazardous haze, Khon Kaen shows it knows how to tackle the problem at its root. If successful, the northeastern province can be a role model when it comes to solving PM2.5 -- particulate matter with a diameter of 2.5 micrometres or less.

Yet there is a ray of hope, as Khon Kaen administrators have worked out a strategy to tackle the air pollution crisis.

The causes of the PM2.5 smog vary in different provinces. In Bangkok, the hazardous haze is mainly generated by the incomplete combustion in car engines. What the city should do is to ease traffic congestion, encourage car owners to use high-grade gasoline and have their vehicle engines checked or, in an ideal world, stop motorists driving into the city.

But in Khon Kaen, the main culprit for the smog is farming practices in which planters burn sugar fields before cutting.

The province is one of the country's major sugarcane growing areas, with quite a few sugar mills. For years, locals in the province, like other areas with large-scale sugarcane plantations, have suffered from the pollution that is a byproduct of this cash crop.

Indeed, the air pollution from sugar farm burning has been going on for over a decade. Somehow, the problem slipped from media and state attention, while there are hundreds of news reports on burning in sugarcane plantations in provinces like Nakhon Ratchasima, Kalasin, Kanchanaburi, Suphan Buri and Phetchabun. There were reports of farmers choking, and even dying, in a blaze.

Two days later, a 34-year-old sugarcane farmer, Pimchanok Pavaputanont, was arrested after setting fire to her plantation and posting a live broadcast on her Facebook. She was fined 1,000 baht and released after admitting to what she did and showing remorse. She told the media she did not know burning her crop caused PM2.5 dust, nor realise it is against the law to burn on her farm.

At this point, you must wonder why sugar cane farmers need to burn their plantations?

Burning sugarcane before cutting -- known as pre-harvest burning -- started in the past decade or so. Previously, it required skilled labourers to handle the job, which was known as "clean harvesting", as planters manually got rid of leaves from the sugar cane, and neatly packed sugarcane into bundles before loading those bundles into trucks. The process was back-breaking and time-consuming. 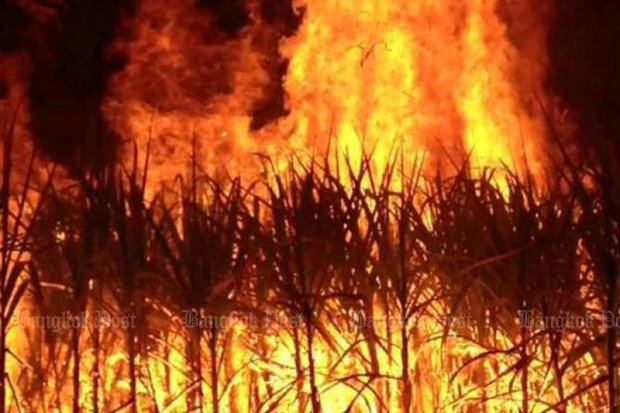 The 'pre-harvest burning' of sugarcane is practised worldwide. Khon Kaen authorities are going to try to stop it. (File photo)

Harvesting methods then changed as sugar production become a big industry, in both the domestic and international markets. Planters need to compete against time. While plantations expanded, skilled harvesters retired and people resorted to slash-and-burn as a "quick fix", as it saves time and labour costs (for cutting the remaining stalks). Burnt sugarcane is much easier to cut and that helped farmers send their sugar cane to the mills in time. By this means, the sugar mills also get quick supplies to meet orders from world markets.

In the case of Khon Kaen, the governor also offered a solution to farmers by asking sugar mills to extend the sugarcane purchase period by another three months from the end of April. The extension of the sugar milling season is supposed to give more time to farmers for "clean cutting".

Meanwhile, the government and the sugar industry have also reached a solution. The Committee of Sugar Board (OCSB), which oversees the sugar industry, has tried to solve plantation burning for years by seeking cooperation from factories, and even offering extra money to farmers who refrain from slash-and-burn practices.

Last week, the OCSB proposed a six-billion-baht soft loan for farmers to buy sugar cane cutting trucks, equipment to help farmers save labour costs and time. So far, the sugarcane burning area has fallen by 4%.

However, much work must still be done as it is estimated that half the sugarcane products in Thailand originate from slash-and-burn plantations.

Yet, I believe the problem should not be left with just the government and the sugar industry.

Unless all stakeholders pitch in, we will end up eating "black sugar" and inhaling dirty air.