Could the baht strengthen even further?
Opinion

Could the baht strengthen even further?

A man walks past a bank's currency exchange board in the capital. (Photo by Patipat Janthong)

Just the other morning before I woke up, I dreamed that I was in line at a bank waiting to change my Thai baht into US dollars for an overseas trip. Once I got to the teller, she told me that today's baht-to-dollar exchange rate was 25.8 and asked how many dollars I wanted. I asked her to repeat the exchange rate again and she confirmed the rate of 25.8 baht to the dollar. I told myself that this must be a dream, and I woke up.

Yes, it certainly is a dream and the Thai baht will never get to that level, but it looks like it could become even stronger than the current ratio of 30.59 baht per dollar. There are two reasons for this possibility and neither of those have to do with the state of the Thai economy or Thai politics.

The first reason is that the US is likely to lower its interest rate by at least half a percentage point this year. Of course, President Trump will pressure the Federal Reserve Board (the Fed) to lower interest rates for the benefit of the economy and the upcoming presidential election. 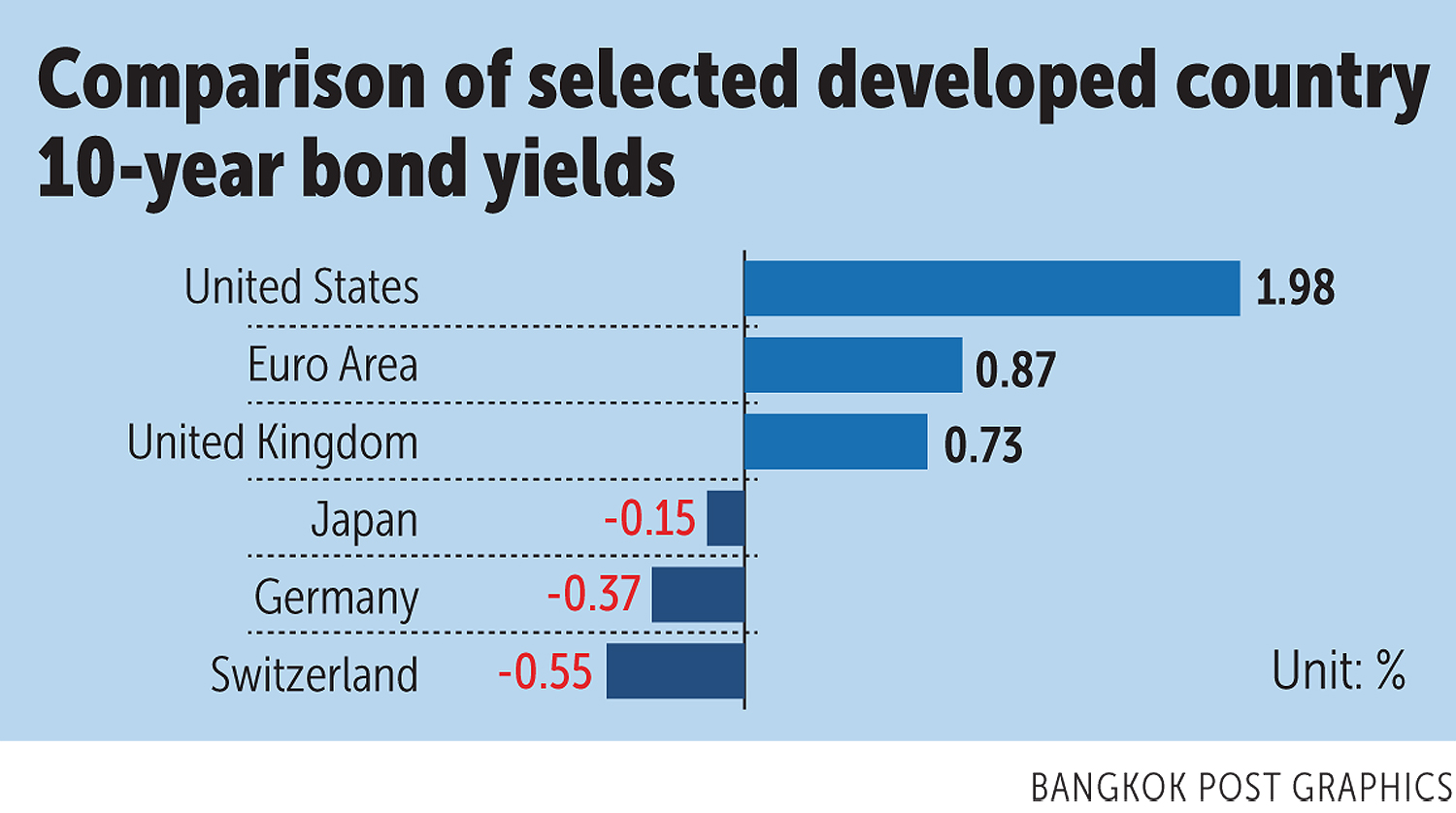 Even if the Fed shaves half a percentage point off its key interest rate, US rates are still higher than their peers' by a wide margin. And even if 1% is taken off the current 2.5% Federal Fund Rate, US rates will still be the highest among developed countries. On this point, I don't see any reason why the Fed would not lower its interest rates.

Additionally, other developed countries are also lowering their interest rates, which will make the rate differentials even wider. Australia is the latest example of this, as its central bank cut key interest rates by 0.25% to 1.0% on July 1.

On a technical note, one can clearly see that the short-term federal fund rate is higher than the long-term rate of the 10-year bond. This concept is called an inverted yield curve, which is a warning sign of another economic recession, and the Federal Reserve still wants to fix that.

After the Fed lowers its key rate, what will happen? Will capital or dollars flow out of the US to a "currency safe haven"? The big question is where the money will go to. I'm no currency wizard, so please don't hold me responsible for the answer.

The golden rule is that when the situation becomes uncertain, money goes to where it's safe, hence the term "safe haven". In this case, that safe place is in countries where international reserves to gross domestic product (GDP) are high. Switzerland tops this list as its international reserves are higher than its GDP. 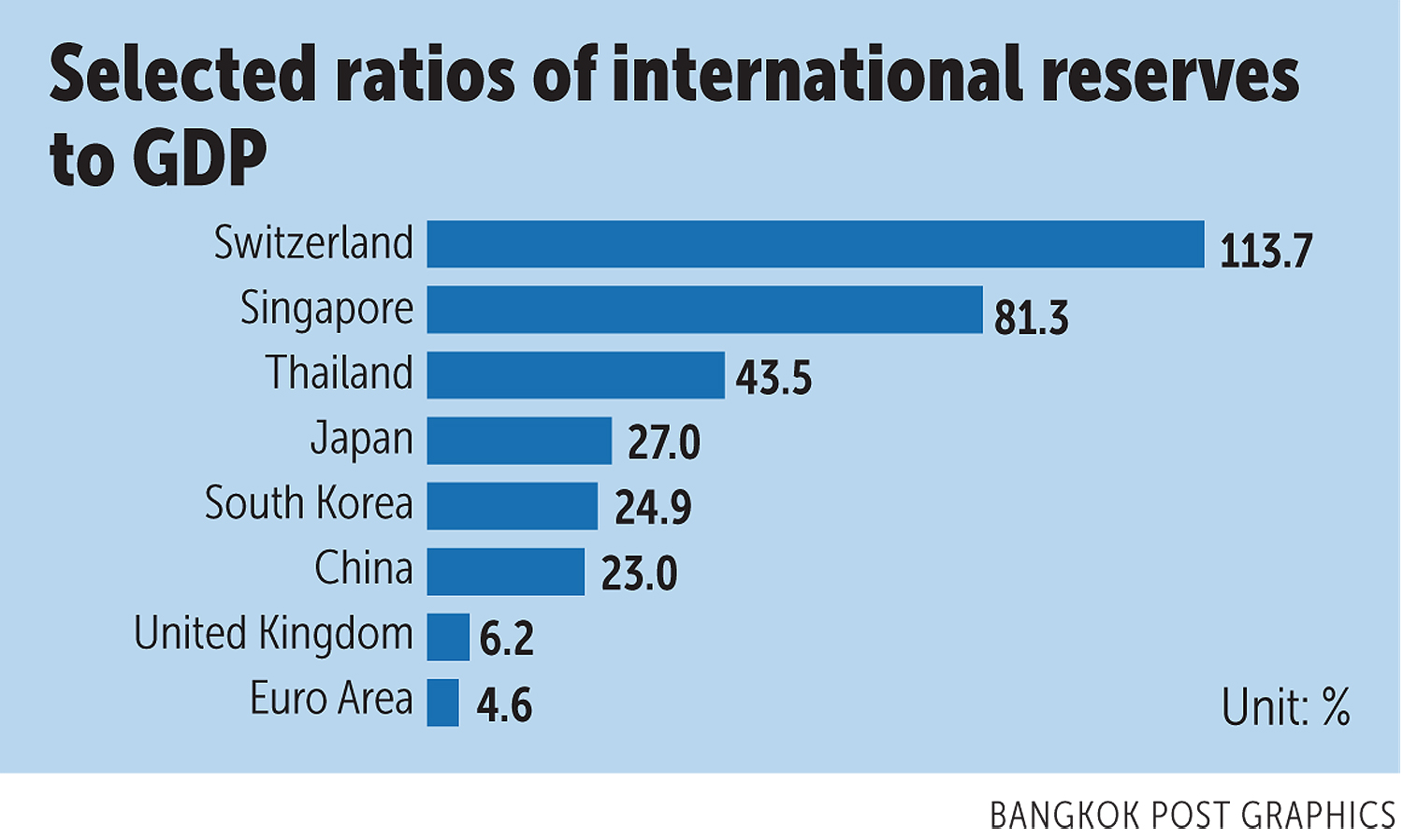 It's no wonder that the Swiss franc has appreciated by over 80% against the US dollar over the course of the past 10 years. As the influx of capital doesn't necessarily benefit the economy, Switzerland has tried to wade off the incoming capital by lowering its interest rates to a deep, negative level. Thailand's international reserves to GDP ratio is also very high, especially when compared to Japan, South Korea and China. Our country is certainly on the top of the "currency safe haven" list.

You will find the answer to the future of the Thai baht when you look at both the 10-year bond yields of developed countries and the list of countries with high levels of international reserves to GDP. The US's high 10-year bond yield means capital will flow out of the US and into safe havens.

And Thailand's high ratio of international reserves to GDP means the Thai baht is definitely high on the safe haven list, and more capital will be coming into Thailand. Also, unlike Switzerland which has a negative interest rate, our current 10-year bond yield is currently at 2.1%, which is a rare plus. Therefore, the Thai baht will become stronger in the not-so-distant future.

So, how strong will the baht become? I could make a guess according to the relative numbers, but I would rather not because this isn't a "get rich quick" article, but rather an informative one.

People tend to associate high levels of international reserves and strong currencies with robust economies. That used to be true under the fixed exchange rate system, because the country needs a high level of reserves to keep its exchange rate fixed.

But under the flexible exchange rate system that Thailand adopted in July 1997, countries do not need large reserves to maintain strong economies. EU countries, including the United Kingdom, are good examples. Their international reserves to GDP ratios stand at about 5%.

On the other hand, a level of international reserves that is too high can be harmful to economies. That's because as the central bank accumulates foreign reserves, it has to allow more foreign money to pass into its economy.