Rights lawyers stage protest of their own, leaving their clients out on a limb, writes Veera Prateepchaikul

In this Feb 28 file photo, activists demonstrating against the lese majeste law demand the release of political prisoners behind bars. (Photo by Wichan Charoenkiatpakul)

Patiwat Saraiyaem, alias Mor Lum Bank, one of the core leaders of the anti-establishment Ratsadon group was eventually granted bail by the Criminal Court last week after he pledged not to criticise the monarchy and not join future political protests.

He is the only one among more than 20 activists of the Ratsadon group facing lese majeste and other serious charges to get bail. Mr Patiwat has his own lawyer, while the other 21 activists use the service of the Centre for Human Rights Lawyers. His lawyer must prioritise the wellbeing of his client -- which means getting him out of prison first.

Mr Patiwat's pledge met the standard requirement for bail approval by the court, which is applicable to all suspects and convicts. The court can reject a bail request if it feels a person may pose a danger to society after being allowed to leave.

Yaowalak Anuphant, chief of the Centre for Human Rights Lawyers, told the media last Friday that Mr Patiwat did not join the other 21 remanded Ratsadon core leaders and followers -- among them Parit "Penguin" Chivarak and Panussaya Sitthijirawattakul -- in refusing to sign a document recognising the trial process as an act of protest against what they say is a flawed judicial system.

Such a decision left them without a lawyer to defend their cases. On the same day, the Criminal Court rejected the bail requests of two other core leaders -- Somyos Prueksakasemsuk and Chatupat Boonpatthararaksa, alias Pai Daodin -- after both made a U-turn the day before by signing their trial acceptance forms. Both had earlier pledged not to criticise the monarchy in future protests. 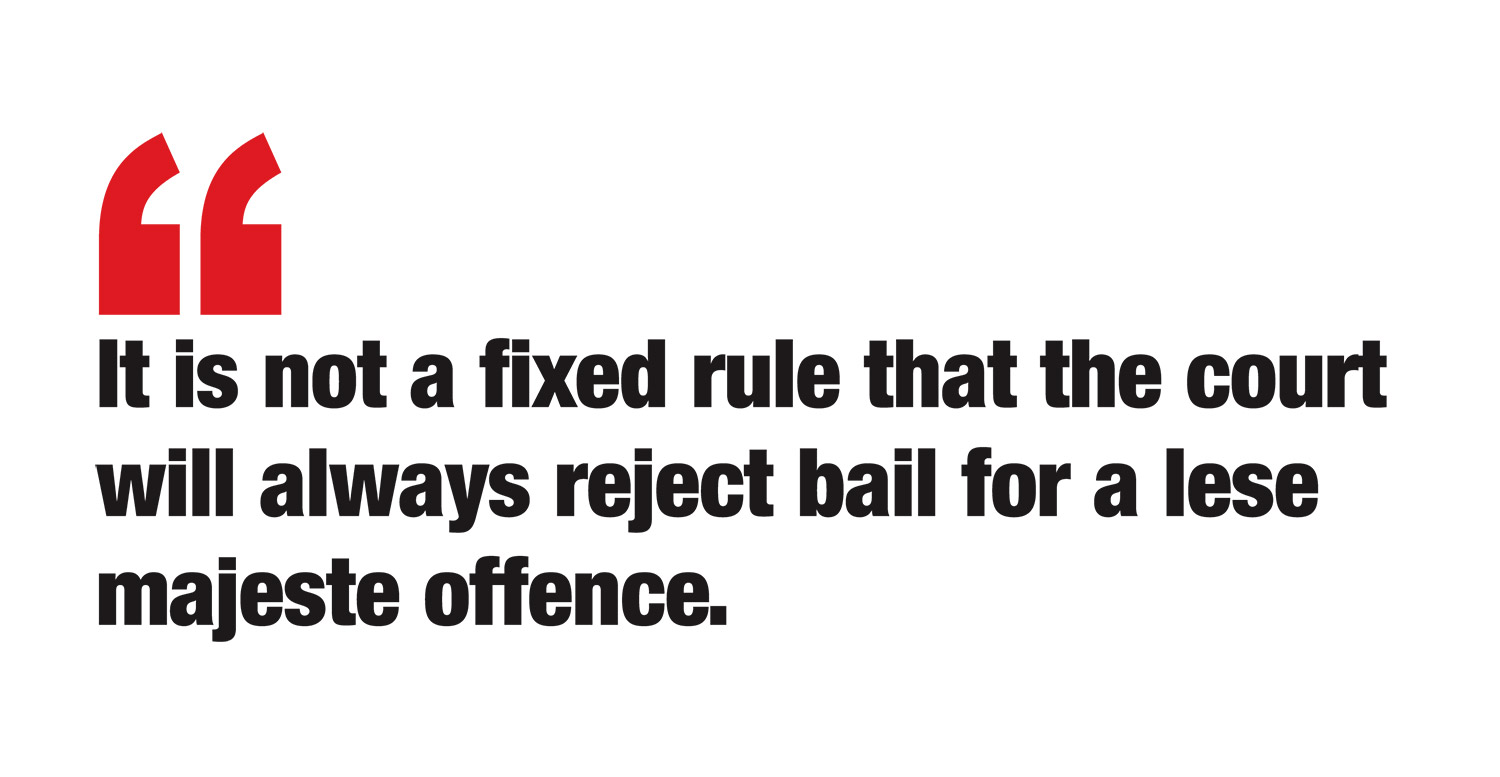 The court has a reason not to grant them bail despite their pledge to not criticise the monarchy. The denial is not beyond expectation given the core leaders' challenge to the judicial system. Since the granting of bail is part and parcel of the judicial system, hardly could someone expect bail when he or she openly rejects the justice process.

According to Ms Yaowalak, the centre decided to withdraw its lawyers from the trial of this case -- related to the protests in front of Thammasat University and Sanam Luang on Sept 19–20 -- because of an untoward incident in the courtroom on March 29.

She recalled there were a number of prison officials in the courtroom who kept a close watch on almost every Ratsadon detainee to prevent them from talking to their relatives or lawyers.

When any detainee was seen scribbling something on a piece of paper, a prison official would immediately snatch the paper away from the detainee's hands. That was the last straw that prompted the centre to withdraw its lawyers as a gesture of protest. But that may not be the right decision because the first priority of a lawyer is to ensure that his/her client is accorded the best service and, in this case, is to try to secure their release on bail.

The human rights advocates should be aware of the basic requirements to be met by their clients if they would like the court to grant them bail, particularly the pledge or assurance for the bail applicants that they will not repeat the same offence they allegedly committed, in this case, lese majeste.

That all the 21 Ratsadon members and their lawyers loathe the lese majeste law or Section 112 of the Criminal Code and want it to be abolished is an open fact and they have the right to have such attitude.

But they should also understand as well that the court is duty-bound to enforce the law and simply cannot accept their demand for bail on the principle of presumption of innocence until proven guilty unless the lese majeste law is abolished first.

On the same day that the 21 detainees announced their wish to remove their lawyers, former human rights lawyer Arnon Nampha, one of the detainees, issued a statement, rejecting the judicial system, claiming that they have been denied fair treatment in defending the case. Mr Arnon cited the court's repeated rejection of their bail applications which, he alleged, was against the principle of the presumption of innocence until proven guilty, resulting in their detention like caged animals and devoid of human dignity.

Even in the "Land of the Free" like the US, not every suspect or accused is granted bail by the court under this universal principle. Instead, the court will not usually grant bail to those charged with murder, other violent crimes and who pose a danger to the community or are repeat offenders.

Lese majeste is not a crime by its nature and it is an offence liable to imprisonment for a minimum of three to a maximum of 15 years because the law says so. The high penalties are not proportionate with the nature of the offence and, hence, the law needs to be amended, at least, to substantially reduce the prison term while the Ratsadon group is demanding the abolition of such a repressive law.

It is not a fixed rule that the court will always reject bail for a lese majeste offence. Several Ratsadon core leaders were granted bail before while their cases were still pending with the police. The Centre for Human Rights Lawyers should rethink its decision to withdraw from defending the 21 Ratsadon core leaders and followers because such a decision does not benefit their clients.