Thai economy nearing 'do it, or die'
Opinion

Thai economy nearing 'do it, or die'

In my previous articles, I have suggested the economy is in bad shape, and that at least 2 trillion baht in economic relief packages is needed to prevent the economy from collapsing.

The governor of the Bank of Thailand has just voiced a similar idea by urging the government to borrow an additional 1 trillion baht to boost the economy. He has given four reasons why the economy is in serious need of support.

The Covid-19 outbreak in Thailand has caused 1) massive income losses totalling 2.6 trillion baht from reduced working hours and business interruption; 2) 3.4 million unemployed and under-employed workers, equivalent to 13.4% of the non-agriculture workforce; 3) a K-shape recovery which means some industries, such as the tourism industry, will never recover without government support; and 4) a long recovery time of three years compared to two years elsewhere in Asia. To overcome these four problems, in the governor's view, a 1 trillion baht GDP push is required. 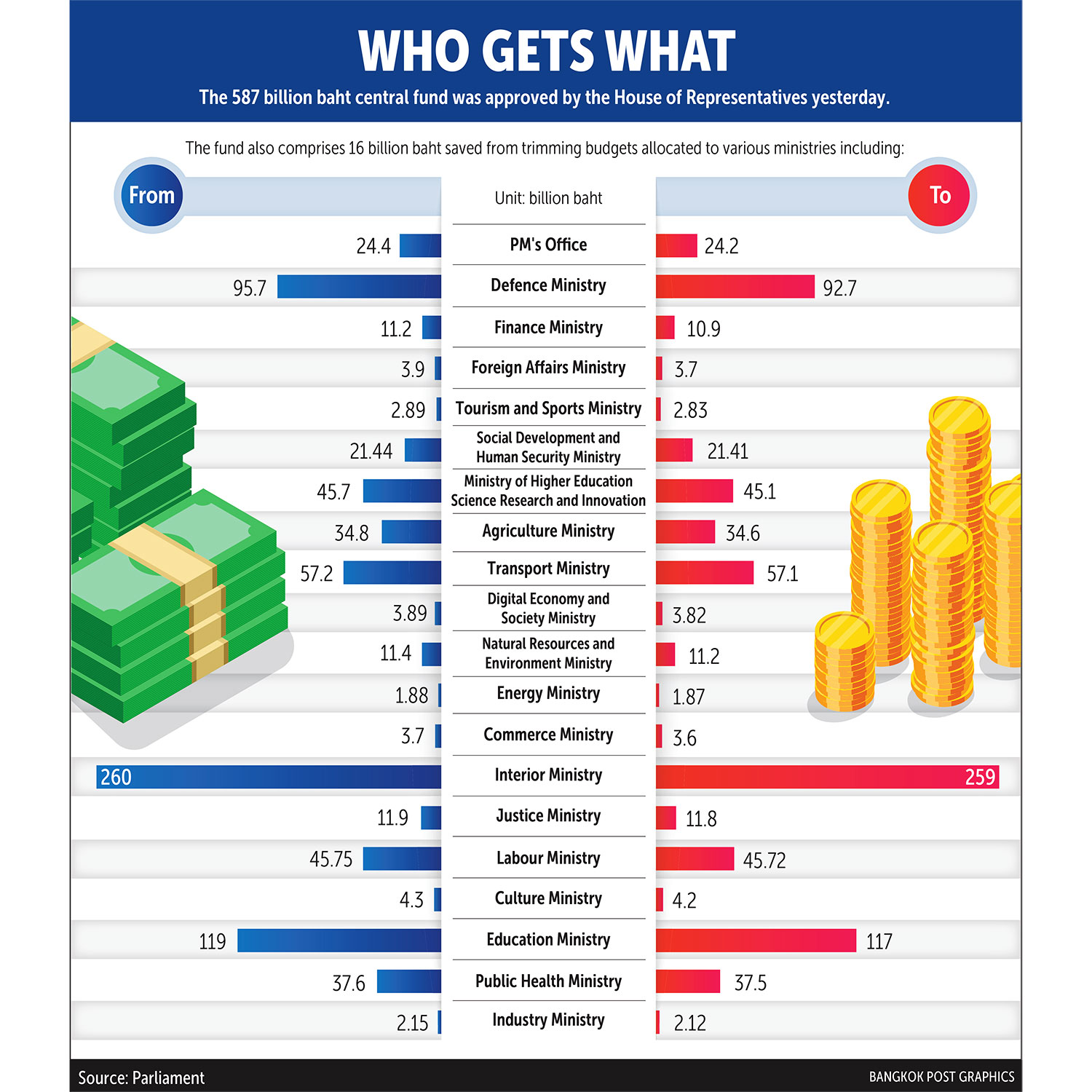 The governor has the right idea but the wrong number. In order to push GDP up by 1 trillion baht, economic stimulus packages must be at least 2 trillion baht, not just 1 trillion baht because "free" money is only half as effective as "earned" money. I term this the "chicken for fish" theory. Let me explain.

Assuming that there are only two workers/consumers in an economy, Mr A who raises chickens and Mr B who raises fish. A chicken and a fish are both 100 baht each. During normal times, Mr A will sell his chicken for 100 baht and use the money to buy one fish from Mr B.

Then comes a bird flu outbreak causing all the chickens to die. The government decides to support Mr A by giving him "free" money of 100 baht. Mr A uses that money to buy fish from Mr B.

Here is the essence of the theory. During normal times, 100 baht of earned money will be transacted to create two products for the economy -- one chicken and one fish. Thus, GDP, the valuation of an economy, would be valued at 200 baht. With stimulus packages, 100 baht of free money to Mr A will be transacted to create only one product -- one fish. With only one product, GDP would be valued at 100 baht.

Confused? Do not worry. Readers are not economists. Just remember that "free" money from government stimulus packages will not push GDP up on a 1 to 1 basis. In the real world, the ratio is 1 to 0.25 which means 1 trillion baht of stimulus packages would likely induce a 250 billion baht increase in GDP.

This phenomenon has already happened in the US and around the world. About US$2.8 trillion (93 trillion baht and roughly 14% of the GDP) of stimulus packages was spent by President Trump and President Bidden.

However, that money can push US GDP growth up by only 3.5% and not 14%. Why? Because when people and businesses receive "free" money, they do not naturally spend the entire amount at once. They save some for future rainy days, slowing down immediate GDP growth.

The real problem now is not arguing about the right size of additional borrowing as the government is currently not spending a substantial sum of money to stimulate the economy. Have we forgotten the 0.5 trillion baht of additional borrowing authorised by the emergency decree on May 25? Two and a half months have passed. How much has been borrowed under that emergency decree? Urging the government to borrow 1 trillion baht on top of that could prove to be a waste of time.

I have given three possible reasons why the government is not in a hurry to borrow. The first one is that legal public debt to GDP ceiling of 60% is about to be breached. However, this problem can be easily resolved by amending relevant laws. The second possible reason is the government might reserve the borrowing allowance to cover income shortfalls as a weak economy means a much lower tax income.

The last possible reason could be that the government might realise that the Thai liquidity market is very tight and a large amount of borrowing might not be feasible.

The second solution is for the Bank of Thailand to purchase Thai government foreign currency bonds, ie, sovereign bonds. Instead of issuing baht bonds which can upset domestic liquidity, the government can opt for issuing dollar bonds. This arrangement is equivalent to pseudo capital inflow.

As I have explained before, the 1 trillion baht government borrowing in 2020 was funded by foreign money through the balance of payments surplus and hot money inflow.

Available domestic liquidity in 2020 was also not enough to absorb large funding needs. Fortunately, the Bank of Thailand's foreign currency reserves, one of the world's strongest, is over $230 billion which is ample to support the issuance of Thai sovereign bonds of $30-60 billion.

The third solution is to put the economy into hibernation. Stimulus packages are costly and would result in a high price to pay in the future. To support the idea of 1 trillion baht additional borrowing, the governor also suggests that an increase in the VAT rate might be necessary. A 1% increase in VAT would bring in 60 billion baht of extra tax income annually. To pay off the debt and its interests, VAT would have to be raised from the current 7% to 8% for about 20 years. Of course, a higher VAT rate would bring hardships to lower income people. Economic hibernation is a much cheaper alternative as it will incur minimal cost to the government and consumers.

How would this hibernation concept apply to the economy? Instead of the government giving out free money of 1 trillion baht and shouldering the full amount of debt, consumer and business expenses of 1 trillion baht (or much less) can be eliminated to yield equivalent effects on GDP. How? I will need more time to think the process through.