Deputy Prime Minister Chalerm Yubamrung may want all condemned drug traffickers put to death as quickly as possible, but this would not solve the problem of widespread drug abuse. Instead, it would paint the country in a negative light, with little positive effect.

Many of us, I believe, would love to see condemned major drug traffickers executed, to ensure they never again have the opportunity to poison our children with their filthy products.

This is why Mr Chalerm’s proposal for a special decree providing for the execution of drug traffickers condemned to death by all courts -- Criminal, Supreme and Appeal -- within 60 days of the final verdict has not triggered a public uproar.

This is an indication that the public could not care less about these people. They may well even feel satisfied that, at the least, society will be a bit safer with a few fewer drug traffickers still on the planet. 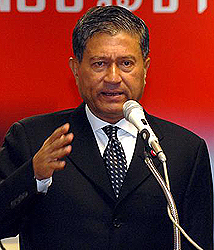 But Mr Chalerm’s proposal is morally wrong as it goes against the principles of human rights, which cherish the life of a human being whether an innocent or a criminal. Also, the proposed law, which would make it mandatory for condemned drug traffickers to be executed after 60 days of the final verdict, could be seen as taking away the power of clemency vested in His Majesty the King to save the lives of condemned prisoners.

By its nature, such a law, if it ever becomes a law, is a double-standard. The big question is why only condemned drug traffickers should be executed with such haste, and not condemned murders or rapists.

All condemned prisoners have the right to appeal for clemency from the King and it depends on the King himself whether mercy should be granted.

In normal practice, when an appeal for clemency is sent to the palace an execution will be delayed until there is a response from the palace, which explains why there have been few executions in recent years, even though there are many prisoners on death row.

Capital punishment has been proven ineffective as a deterrent against crime. The execution of a drug trafficker is not likely to discourage other traffickers, let alone the person who steps in to fill the condemned man’s shoes, for the simple reason that the huge profits of the drug trade are just too tempting to people willing to take the risk.

Another thing that Mr Chalerm should take into consideration, even though he himself may not feel concerned about it – is the reputation of the country, which is likely to be badly tainted if his proposal were put into effect. Thailand would be hounded by all the human rights organisations and many western governments.

The problem is, could Prime Minister Yingluck Shinawatra face up to and ignore such harsh global criticism the way her elder brother Thaksin did when he was hounded over the estimated 2,500 extra-judicial killings of suspected drug traffickers, and far too many innocents, in the dirty drug war he waged almost a decade ago?