Having announced his political retirement some months ago, Gen Chavalit Yongchaiyudh re-emerged out of the blue with an open letter in support of the KPI's reconciliation proposals. And then, just as quickly, he backed off -- explaining the time was not right for him to speak out.

Besides the widespread criticism of his inability to convey any message in plain, understandable language, General Chavalit Yongchaiyudh’s other big problem is that few people take him seriously any more.

The former advisory chairman of the Pheu Thai Party on Monday issued a short version of his 11-page open letter supporting the reconciliation proposals made by King Prajadhipok’s Institute (KPI) and criticising the opposition Democrat Party for pulling out of the House reconciliation committee headed by former coup leader Gen Sonthi Boonyatkalin. 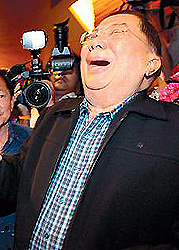 In the statement, General Chavalit - known as Big Jiew - said that the Sept 19 coup that overthrew the Thaksin Shinawatra government in 2006, was illegal and, therefore, all its actions including the setting up of the Assets Scrutiny Committee to investigate corruption in the Thaksin government were illegal. Hence, everything relating to the ASC and its work and findings should be invalidated.

For reconciliation to work, the retired general suggested that a policy similar to Prime Minister’s Order 66/23 issued by then prime minister Prem Tinsulanonda to deal with the communist insurgency three decades ago should be brought back.

Gen Chavalit was supposed to meet the press today to present in full the details of his 11-page open letter, and to take questions from members the media about his position on reconciliation.

For some reason, he abruptly changed his mind. His aide, Lt-Gen Pirach Samamiwat, told Thai Rath Online that former premier Chavalit felt it was not the right time for him to meet the press and reveal the full text of his open letter. What a disappointment!

If this is not the right time for him to speak his mind on reconciliation, which is the most topical issue and on which many other people have already shared their views, then when?

Was it because Gen Chavalit had second thoughts about his open letter? Or did he simply chicken out after someone warned him not to open his mouth?

Controversial though the KPI’s reconciliation proposals are, they are not a sensitive issue that someone like Gen Chavalit should not talk about. The Pheu Thai-led government, and in particular General Sonthi, who leads the tiny government coalition Matabhum Party, should certainly welcome his positive input.

As a matter of fact, Gen Chavalit is not quite right about Order 66/23. The order granted a general amnesty to all misguided communist insurgents but did not absolve them of any criminal offences they had committed.

It seems to me that the general’s abrupt back down on meeting the press to divulge his open letter in full was for the simple reason that he feels the time is not yet right and it would hurt his credibility. This also explains why so few people, including those in the Pheu Thai Party, take him seriously any more.