The big shots at the Ministry of Commerce seem to be living in the twilight zone, completely oblivious to the harsh realities confronting the ordinary men and women on the streets struggling to make ends meet in the face of runaway living costs.

The latest consumer price index (CPI) compiled by the Commerce Ministry put the inflation rate for April at 2.47 per cent year-on-year, about one percentage point below that of February and March. The index also shows that the prices of food items such as pork and chicken meat and string beans are relatively lower than actual market prices.

Commerce permanent secretary Yanyong Puangrach has insisted that the ministry’s figures are correct and not fabricated to mislead the public. According to the ministry, the price of pork for the month of April averaged 123.50 baht per kilo, 68.99 baht for a kilo of chicken meat and 30 baht for a kilo of string beans. 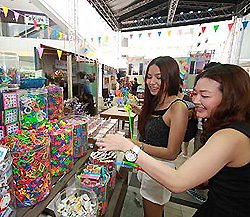 After his press conference during which the ministry’s latest CPI stats were announced to the media, Mr Yanyong led reporters to Taopoon fresh market for a field inspection -- to show them that the ministry’s price index was accurate and credible.

I do not know whether Mr Yanyong was embarrassed or not when confronted with these truths, because the reporters who accompanied him did not report on that aspect. But I bet he will come up with some excuse to back up his ministry’s findings anyway.

Economist Sompob Manarangsan said that the low inflation rate was in contrast with the rising cost of living and came as quite a surprise. But he warned that this was not a good sign as it showed that the purchasing power of consumers has shrunk sharply, to the extent that they have started tightening their belts.

Mr Sompob said this sort of thing occurs only when an economy is in crisis.

Whether it was sheer incompetence, or a gross mistake, the Commerce Ministry’s CPI figures are anything but reliable and credible. Had it been a private corporation, it would have gone belly up a long time ago, or its top executives sent packing.

The Commerce Ministry’s latest consumer price index should be consigned to the garbage bin at Taopoon market, where it belongs.