Amidst the ballyhoo of black-screen TV, broadcast-rights rivalry, football fracas, reconciliation war and constitution horror, we return to visit the most beloved media agency of all: the Cultural Surveillance Office, aka the Rottweiler, the guardian of Thainess, or the Department of Propriety.

Last month, the Culture Ministry made a surprising move: they transferred ("promoted") Ladda Tangsupachai, the controversial head of the surveillance office whose past record inspires shudders among artists, singers, actors, and anyone who dares test the limits of official appropriateness. Ms Ladda's new post is analyst and supervisor of the southern cultural policy, an appointment that has sparked an impromptu joke about the South bearing the brunt, once again, of Central prejudices and conservatism. 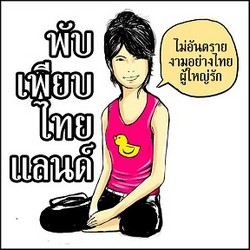 One of Ms Ladda's last campaigns was against the fad of planking.

Whether or not there's a political angle to this move is a moot point, one can never judge the depths of such a labyrinth. Ms Ladda's latest involvement was to push for the new bill to drum up the funding for "safe and creative media" - a name that evokes either easy optimism or necessary caution, for "safe", in linguistic cartwheeling can be a euphemism for censorship. The details of the law, which has been proposed to parliament, are not available, but the earlier draft contains a clause that the National Broadcasting and Telecommunications Commission should inject money into the fund which will be distributed to "producers of safe content", whatever that means. It was widely expected that Ms Ladda, a senior officer, would supervise the funding once the law had been passed. But now, no more.

While parliament, which has recently adopted the lively bar-room brawl and thuggish tournament style, is embroiled in the reconciliation mess, the "safe media" bill is likely to wait. But let's make sure we keep an eye on it. Not that we don't want safe TV, but we shouldn't confuse precaution with prohibition, and protection with moral paranoia.

That last term is what we often attribute to a surveillance agency. Ms Ladda's transfer ended her long tenure at the cultural watchdog marred by resentment, scandals, and even T-shirts bearing her infamous quote. To be honest, there have been sighs of relief at the news of her move. But to be fair, Ms Ladda, to whom I talked personally on a few occasions, is a steadfast believer in her cause: to protect the nobility of Thai culture and weed out unpleasant surprises, from short skirts to TV bitchfests. She's a crusader on the eternal horseback to Jerusalem - her war cry is authentic, and her dogmatism is transparent. Her run-ins with the more liberal sections of society illustrate the wider contest to own, or define, the meaning of Thai culture in the 21st century.

It'd take hours to revisit her high-profile outcries at media "indecency', but here are the two most infamous cases: in 2008, Ms Ladda gave an interview to Time magazine and described Thai film audiences as "uneducated" and thus needing parenting from the ministry (somebody made T-shirts featuring the quote); then last year, she angered many by speaking out against a hit soap series and the portrayal of its men-lusting female lead, which led to an episode of national hysteria.

Symptomatic though not necessarily emblematic, Ms Ladda is easily villainised, sometimes unfairly. The problem is not her; the problem is the fact that the government blithely believes that something called the Cultural Surveillance Office is even necessary. As if we were a mansion so susceptible to cultural vandalism, or a terminal patient in need of 24-hour vigilance, or an ungodly girl under perpetual threat of demonic possession. The fact that we still need to spend tax money on this agency is an issue worthy of public hearing. And that the government still relies on the watchdog's (dis) service betrays the feudal mindset that it believes the people are so weak they can't think for themselves.

Society should be trusted to be its own watchdog. Top-down control isn't working any more in the new environment of great flux, of rapid advances in technology, and of heady, global interconnectedness that keeps redefining "culture". Civic bodies, consumers organisations, industry associations - say, TV producers or filmmakers - and the audiences themselves should be encouraged to have the power to control the media's performance and to decide what's appropriate and what's not in an organic way. Governmental parenting is as dated as last week's football results, and the Culture Ministry is too valuable to spend its time, like East German thought police, carrying out surveillance on the people. It's a shame that they still don't realise this at this hour.

Kong Rithdee is a Bangkok Post columnist. He has written about films for 18 years with the Bangkok Post and other publications, and is one of the most prominent writers on cinema in the region.