No one to mediate for Thaksin
Opinion

No one to mediate for Thaksin 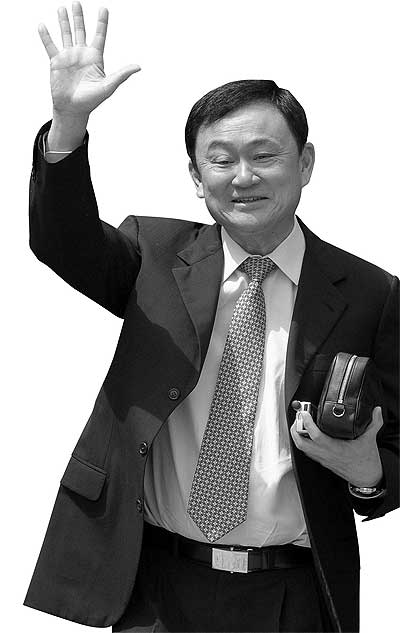 He said the late prime minister was not convicted of any criminal offences but chose to live in exile until his death because he knew that if he returned to Thailand there would be a conflict.

Dr Prawase said whether Thaksin will return to serve his two-year jail term or not would depend on his judgement, but he would like the ex-premier to think about the conflict and chaos which could take place once he comes home.

He said Thaksin is already in control of the Yingluck government and he should be happy with that.

The powers of Thaksin, he added, will be beneficial to the country, but only if they are used positively.

This was a well-intended piece of fatherly advice for Thaksin from a respected senior citizen.

For Thaksin to be a bit more selfless and to think more about the national interest than his own interest is a sound piece of advice for the good of Thaksin.

Regrettably, it will probably fall on deaf ears, like the rest of the advice previously given by Dr Prawase.

He said the root cause of Thailand's political divide was not Thaksin himself but the others who have been trying to eliminate the ex-prime minister from the political landscape through all means, "like torching the entire forest to kill just one deer" - be it the coup in 2006, the establishment of the Assets Scrutiny Committee or the breakdown of the rule of law.

Given the completely differing views about the root cause of our political conflict held by Dr Prawase and Mr Noppadon, one should be able to figure out how difficult it will be to work out reconciliation, and whether it will ever be worked out at all.

And this is not the only main problem. The other major obstacle is that there seems to be no one who commands the respect of both of the two main opposing camps - the pro-Thaksin and the anti-Thaksin groups - and who can mediate their conflict.

One can imagine what would happen in a boxing ring if there were no referee.

So it should not come as a surprise that the anti-Thaksin camp, which includes the Democrats, the People's Alliance for Democracy and the so-called multi-coloured group led by Tul Sitthisomwong and the pro-Thaksin camp, which includes mainly the Pheu Thai Party and the United Front for Democracy against Dictatorship, have switched to street politics mode now that the parliament is going into recess for more than a month until the new session starts on Aug 1.

Political tension in the parliament has eased for now after the parliament and/or the Pheu Thai Party backed down on the constitutional amendment bill and on the reconciliation bills.

The fireworks are expected to restart, however, once parliamentarians return to the House in August.

But street politics have already started in earnest. Last Friday, the Democrats held a rally at King Rama IX (Suan Luang) park, while Pheu Thai and the UDD staged a rally at Chalerm Phra Kiat park in Min Buri.

Similar rallies will be held every Saturday with the next location either Rayong or Chanthaburi.

Meanwhile, in Udon Thani, about 3,000 former communists converged in front of the town hall to show moral support for the judiciary in the face of a challenge to the Constitution Court by Pheu Thai MPs and their red-shirt supporters.

At Sanam Luang, a group of people who called themselves the Siam Protection Group led by Gen Boonlert Kaewprasit staged a religious ceremony to bless the country. Similar rituals were held at the town halls of several provinces.

The UDD plans to hold a mass rally at the Democracy Monument on July 24 as a "show of force" supposedly to deliver a no-nonsense warning to the ammart (elite) clique to stop their attempts to undermine the Pheu Thai-led government.

Red-shirt co-leader and Pheu Thai list MP Jatuporn Prompan accused independent organisations _ namely the Constitution Court, the Office of the Attorney-General, the National Anti-Corruption Commission, the Ombudsman and the National Human Rights Commission _ of being in the service of the ammart bent on undermining the government.

He said the religious ceremony held at Sanam Luang by the Siam Protection group and similar rituals staged in the other provinces were part of the attempts to instigate public dissent against the government.

The battle of the airwaves is likely to escalate with changes at Modernine TV (channel 9) run by the Mass Communications Organisation of Thailand.

After the elimination of The Nation's news programmes from the channel, two news anchormen who are said to be sympathetic to the red shirts have been brought in as replacements.

Putting all these political activities into perspective, one can figure out without much difficulty how the political situation will look in just over a month from now.

And that's not to mention the other pressing problems which may emerge by then, such as renewed flooding and the fall-out from the eurozone financial crisis.

Is the government ready to do battle on different fronts at the same time?