Democracy for the powerful
Opinion

Democracy for the powerful

Sunday marked the 80th anniversary of the birth of democracy in Thailand. On June 24, 1932, a group of mostly foreign-educated military officers and civilians who called themselves the Khanarassadorn staged a bloodless coup to change this country's administrative system from absolute monarchy to constitutional monarchy. 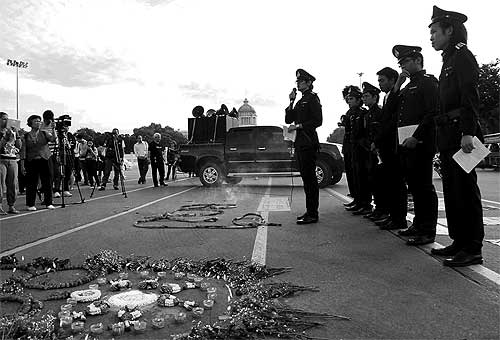 Students of the so-called June 24 Group for Democracy wearing imitation state uniforms perform a ceremony at the Royal Plaza. The group read a statement recounting the role of the Khanarassadorn group which staged a bloodless coup to change Thailand’s administrative system from absolute monarchy to constitutional monarchy on June 24, 1932. SEKSAN ROJJANAMETAKUL

In other words, Thai democracy is already 80 years old.

Had Thai democracy been a human being, it would be called a grandma or grandpa, depending on what gender can be attached to it. Sadly though, Thai democracy has never grown to full maturity despite the fact that there have been 25 general elections, 60 cabinets and 28 prime ministers, not to mention 11 coups and 11 failed coups.

Is Thai democracy really 80 years old? Most of us seem to believe so, but not Dr Chai-Anan Samudavanija, president of the Royal Institute and a prominent political scientist.

During his talk on the subject of Thai democracy at Chulalongkorn University on Thursday, he said he doubted it because even the Khanarassadorn had not thought about instituting democracy when they staged their coup.

What was on their minds was to prevent absolute monarchy from staging a comeback. Dr Chai-Anan explained that what emerged from the coup in June 1932 was actually a change of individuals in power who were not representative of the people.

The individuals who emerged as the new political players were the military and the bureaucrats, whereas the people were excluded from having any real say in the political process even though they were given more freedom and rights.

The political scientist said the Khanarassadorn was concerned with the threat posed by political parties.

Although there was a constitution and a parliament, it wasn't until the year 1952 that the first political party law was enacted, opening the door for power grabs by political parties besides the traditional political players, namely the military and the so-called ammart elitist clique.

But whether Thai democracy is 80 years old or young, it doesn't matter much to the United Front for Democracy against Dictatorship which seized the opportunity to flex its muscles.

Red-shirt followers were mobilised to rally at the Democracy Monument yesterday to mark the historic event and to send a warning to the Constitution Court not to meddle with the government's attempt to rewrite the constitution deemed by the red-shirt movement as a means to achieve its own brand of democracy.

They are keen on a charter which vests the supreme power of administration with a majority of the people without an effective checks-and-balances mechanism and probably with independent organisations such as the Constitution Court, the Election Commission, the National Anti-Corruption Commission and the Ombudsman that they hold in deep mistrust being neutralised.

UDD chairwoman Tida Tawornseth said that 80 years on, the people are yet to taste real democracy and they are still fighting for it.

And those who are actually fighting for democracy (their own brand of democracy) are the power-hungry politicians and the likes of Mrs Tida.

For many people, democracy matters only when there is an election _ the time when canvassers come door-knocking, offering to buy their votes and many voters are willing to sell their votes and don't give a hoot about what democracy means to them.

Dr Ukris Mongkolnavin, president of the government-appointed National Rule of Law Independent Commission, also shared his view of democracy on this occasion. He said the main problem to the development of democratic rule in Thailand is that the supreme power of administration does not rest with the people. The simplest way to fix the problem, he said, is to accept the basic principle _ that in democratic rule, the supreme power of administration of the country belongs to the people.

Politicians themselves should bear the brunt for the failure of democracy through their practices of vote buying, shifting loyalties to the highest bidder, corruption, power grabbing, selfishness and moral bankruptcy.

As long as these politicians are elected to parliament by the people and they are the majority in the parliament, there is no hope for democracy, especially if checks on their power are dismantled.

Of course, we have to accept rule by the majority as a matter of principle despite its weaknesses and flaws. But at the very least there must be an effective checks-and-balances mechanism, be it the judiciary or independent organisations.

Duterte gets tough on China, leaning back to old ally US

After years of shifting the Philippines closer to China, President Rodrigo Duterte appears to be leaning back toward the US.

MINSK: Belarusian President Alexander Lukashenko has been sworn in for a sixth term at a secret ceremony held with no prior announcement, the Belta state news agency reported Wednesday.