A giant step in free expression

Pre-publication censorship is unheard of these days in western-style democracies, including Thailand, but in Myanmar the media has been under this restriction for almost 50 years -- until Monday, when it was abolished to the joy of all journalists there and supporters of free expression everywhere.

I could not help expressing my joy for Myanmar journalists, for their new-found freedom even though it is very limited by our standards and Western standards.

As a veteran journalist of more than 30 years, I have never experienced the kind of pre-publication censorship practiced in Myanmar. The closest thing I personally encountered was during the dark days of civilian dictatorship under prime minister Tanin Kraivixien, in 1976 and 1977, when some powerful figure in the government made late-night phone calls to the editor telling him that such and such a story could not go into print or the paper would face some undesirable consequences. 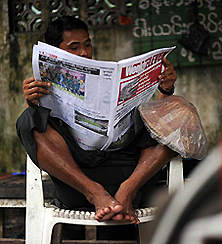 Myanmar's Press Scrutiny and Registration Department (PSRD) announced that from now on reporters no longer have to submit their work to state censors before publication. However, many laws remain in place under which reporters can be punished for writing articles which may be deemed offensive to the government. I only hope that these laws will be gradually eased later on as the democratisation process picks up. Also, officials who are accustomed to barking orders and muzzling free expression should adjust to the new era of openness in Myanmar.

Nevertheless, the lifting of the pre-publication censorship, which began exactly 48 years and two weeks ago, according to head of the PSRD Tint Swe, represents a giant step forward for the reform process which has begun under President Thien Sein’s reformist government.

It was reported that earlier this month Myanmar authorities announced the creation of a “Core Press Council” including journalists, a fomer Supreme Court judge and retired academics to study media ethics and settle press disputes.

Several journalists have opposed this proposed council, claiming that it would be open to government  interference in the media. I couldn’t agree more with them for being suspicious of the government.

As for the code of conduct for Thai journalists, it was drafted by the journalists themselves in consultation with media academics. Also, there is no law governing the Thai Press Council because Thai journalists do not want the government to have any role in the council.

Journalists in Myanmar still have a long way to go before they achieve the kind of press freedom that exists in a democracy. Regardless, my very best wishes go out to them, and I sincerely hope that they exploit this limited freedom for the good of the Myanmar people.

SAMUT PRAKAN: An Argentinian man was arrested and charged with growing cannabis after 108 plants were found at his townhouse in Muang district.

The Philippines shortened curfew hours in Manila and eased the stay-at-home order in a bid to boost its economy. The peso and stocks rose.

Listen to the young