Afew years back, foreign investors scouting for large swaths of land to plant rice and eucalyptus trees backed off after encountering strong local opposition. Anecdotal reports indicate that they have not given up altogether but may be working through Thai fronts to achieve the same end. With warm weather year round, fertile soil, and ample supplies of water, Thailand remains a target for foreigners interested not only in securing industrial raw materials and food supplies but also in obtaining a higher rate of return on their investment. 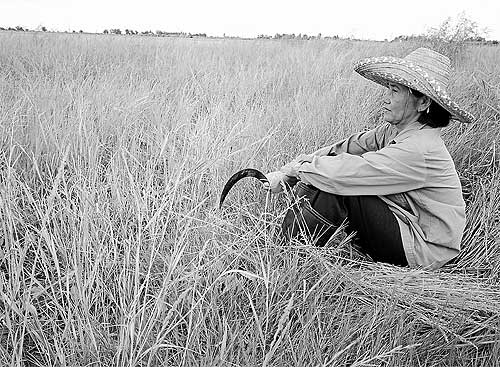 A rice farmer who rents land from an agrobusiness firm in Ayutthaya. Many evicted farmers cannot find gainful employment and earn enough for food that they otherwise could produce themselves.

These investors are part of a diverse group who has significantly increased foreign direct investment in agriculture in recent years through long-term leases or purchases of land in all parts of the world, particularly in developing countries, where intense local opposition often occurs. Fred Pearce, author of When the Rivers Run Dry, spent a year travelling the globe to gather data relating to such investment and recently published a book entitled, The Land Grabbers: The New Fight over Who Owns the Earth (Beacon Press, May 2012). The book provides information on investors, types of land and crops, the process of land acquisitions or grabbing, and impact on local communities and the environment.

The list of investors indicates that some have responded to extra incentives provided by their governments looking to secure food supplies. This is particularly true with South Korean and Middle Eastern investors, whose countries are severely short of land and water, respectively, but have ample foreign exchange earned from exporting manufactured goods and oil. Others are drawn by expectations of earning a high rate of return on their investment. They include old moneyed millionaires, such as the Rothschilds, as well as those with new wealth, such as George Soros. Universities with large endowments and hedge funds also have got involved. Their acquired lands are mostly planted with rice, corn, soy, sugar cane, cotton, and trees.

The involvement of hedge funds is particularly noted since their speculations on agricultural commodities have significantly contributed to the increases in commodity prices that in turn have boosted profits of investment in agriculture. Prices also have risen as a result of decline in output caused by adverse weather conditions and increased demand for crops such as corn and sugar to produce fuels. The decline in output has often led producing countries to impose export restrictions, which have prompted food-importing countries to provide extra incentives for their citizens to plant food crops abroad and ship the output directly home. Such direct shipment of food out of the countries of origin, while a large number of local residents go hungry, is one of the factors creating intense debate. Other factors include evictions of local residents who have long lived on the land, conflicts over water use, and adverse impacts on the environment.

Evictions of residents who are mostly small farmers have intensified a debate on how to produce sufficient food for the rising world population. One group believes that only investment in large industrial farms will raise efficiency needed to produce the required food. This group, therefore, supports land consolidation undertaken by foreign investors although such consolidation often involves evictions of small farmers, sometimes violently. Another group contends that small farms are efficient and produce not only food for own consumption but also for the market. This group argues that it is not the shortage of food that is causing hunger in various parts of the world, for there is more than enough food to feed everybody. Rather, it is the access to food by the poor that is the problem. Many evicted farmers will not be able to find gainful employment in other sectors and earn enough income to buy food that they otherwise produce themselves.

Thai farmers' ability to produce food for their own consumption as well as for the market has been proven. Most operate small farms and are currently debt ridden. They are likely to be "voluntarily" evicted, or sell their land, if buyers _ fronts for foreigners or otherwise _ offer highly attractive prices. There have been enough examples, especially during the recent boom in golf-course construction, to show that proceeds from selling small farms, which appear extraordinary high to poor farmers, do not last long and the sellers soon become even poorer. Unfortunately, present agricultural policy does not adequately address the issues relating to small farms, for it has been a series of populist programmes which serve only to hide or exacerbate the problems. What the country needs is a much more comprehensive set of measures, beginning with land reform as recommended by the recently disbanded Reform Committee chaired by former prime minister Anand Panyarachun.

Sawai Boonma has worked as a development economist for more than two decades. He can be reached at sboonma@msn.com.

Former Senior Country Economist at the World Bank and now a freelance writer.