I cannot help myself joining in their celebration, even though the agreement is just the first step – but a major step – towards peace on Mindanao Island.

As a southerner, I look forward for the day when there is such a peace roadmap for the restive deep South between the Thai government and the Muslim militant groups which have been terrorising people in the three southernmost provinces for the past eight years.

About 5,000 people, mostly civilians and both Muslims and non-Muslims, have died and several thousands more been injured or maimed.

Given the indiscriminate killing which is occurring down there on a daily basis, it appears the dream for peace is just wishful thinking. Yet, I think we should not lose hope. And the Philippines lesson should serve as our inspiration to do likewise – that is to open talks with the various militant groups. 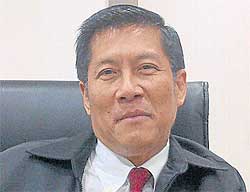 Thankfully a new crop of moderate security officers, namely National Security Council chief Lt-Gen Paradorn Patthanabut and secretary-general of the Southern Border Provinces Administration Centre Pol Col Thawee Sodsong, who are not as rigid as the military, are exploring all avenues to ease – if not end – the bloody conflict through negotiations.

Lt-Gen Paradorn, in a recent media interview, said he is open to talks with “say 10 out of 100 militant groups”, because that meant there would be 10 fewer groups perpetrating the violence if the talks were successful

This is a welcome thought, and much needed, otherwise there will not be any peace talks at all if we have to wait until the real, powerful rebel leaders come out publicly.

THE new NSC chief is also in favour of lifting the emergency decree imposed in the three southernmost provinces saying that it is not effective in preventing violence and tends to cause more problems for innocent people.

Pol Col Thawee, meanwhile, went his way in meeting with the “tom yum kung” operators in Malaysia in his attempt to build trust with the ethnic Malay Muslims, without first consulting the military. Although his initiative  upset the military, it is worthy of being continued.

There are some similarities between the conflicts in Mindanao and in Thailand’s deep South: the Muslim people in both countries strongly feel that they have been ignored and treated unjustly by the central government;  the Muslim rebels feel a strong need for secession, or some form of self-rule.

While peace talks should be encouraged and sped up, the fight against the Muslim extremists must continue for the sake of the safety of the civilian population. Some security officers have said that it took the Philippines 40 years to come up with the framework peace agreement, while Thailand’s southern conflict is just eight years old, emerging in January 2004, so we could afford to be patient.

But do we really have to wait for 40 years? How many more lives will be lost?