Forest issue takes a serious turn for the worse
Opinion

Forest issue takes a serious turn for the worse

Can we kiss goodbye to our forests? Green groups won the first round when they forced Natural Resources and Environment Minister Preecha Rengsomboonsuk to halt the issuance of land documents in certain protected areas. 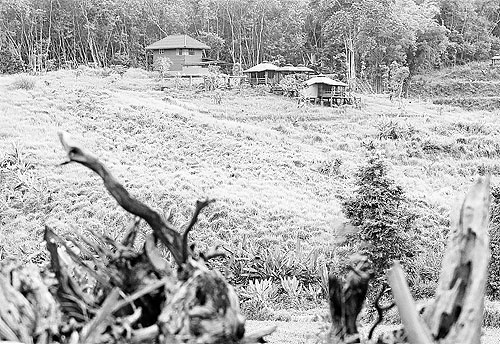 A part of the forest area in Wang Nam Khieo district in Nakhon Ratchasima where illegal resorts have been built. Suspension of arrests and a new plan for issuing rights to deteriorated forest land has raised fears of further encroachment and illegal construction. PATTANAPONG HIRUNARD

The Royal Forest Department had to scrap its plan to issue Sor Tor Kor land occupation right documents to some 15,000 poor families living on about 300,000 rai of so-called deteriorated forest in nine northern and northeastern provinces.

But there is no cause for celebration or reason to lower the guard because the suspension is only temporary pending _ in the words of the Pheu Thai minister _ further study to make sure that the forest is still fertile or is not classified as deteriorated and therefore threatened by the plan.

The question which begs an answer from the minister _ which will not come anyway _ is why further study is needed now when it should have been completed before the plan was slated to be implemented.

According to the Royal Forest Department, the 300,000 rai of deteriorated forest land is just a start as it plans to issue Sor Tor Kor documents to another 2.5 million rai of forest land for more poor families in the next three years.

Director of the Forest Land Management Office, Samak Donnapee, maintains that issuing land rights to people who have been occupying plots in deteriorated forest could curb forest encroachment.

But green groups known as the Assembly of NGOs for the Protection and Conservation of Environmental and Natural Resources do not think so.

They believe that once Sor Tor Kor land documents are granted, it will be only a matter of time before they change hands, with the plots sold to local landlords or the rich, and then the poor forest dwellers will move on to encroach on new land, possibly in fertile forest.

The groups also suspect that this land giveaway plan is another populist policy of the Pheu Thai-led government to curry favour with grass roots people because the land to be allocated and issued with rights papers is mostly in the North and the Northeast.

Personally, I don't have any objection if the landless poor families are given a plot of land to make a living from agriculture or whatever legal occupations so long as there is a condition that the plots cannot be sold to third parties.

But giving them land is not enough. The government should provide them with financial and technical support to enable them to make a living on their land, without which there is a high possibility they will part with the property.

But what is so ridiculous or insane about this Sor Tor Kor land right document issuance plan is that there are no strings attached at all for the giveaway land plots, unlike the other land right papers issued by the state to landless farmers.

There are no conditions prohibiting the recipients from selling the land or banning them from using the land for purposes other than agriculture.

Which means the land can be turned into a resort or, if it is big enough, a golf course.

Besides the unorthodox land right documents, there seems to be more mind-boggling things taking place of late at the Royal Forest Department and the Department of National Parks and Wildlife and Plant Conservation (DNP) under the supervision of Mr Preecha.

If he is still keeping abreast of what is going on in the department and what he did a few months before his mandatory retirement which won widespread praise, he should now be feeling betrayed if he really cares for the country's forests.

As instructed by the minister, arrests of encroachers on forest reserves and national parks have been put on hold pending the completion of the demarcation of the forest land throughout the country.

Faced with such messy red tape, the likelihood is that most officials will just ignore the incident and quietly chant "this forest is not mine, why bother?".

Meanwhile, demolition of illegal resorts in national parks and forest reserves is also put on hold.

So all illegal resorts in Phuket, Tap Larn and elsewhere can heave a big sigh of relief and thank the government for its generousity. And they can expect to make money from both Thai and foreign tourists during this high season.

At the Royal Forest Department, it is reliably reported that department chief Boonchob Sutthimanaswong has ordered all 491 forest protection units throughout the country be dissolved and brought under a new unit focussing on management of forest reserves.

You can just imagine what will happen to our remaining forest land. We can kiss goodbye to our forests if these crazy policies are allowed to be implemented.