Boonlert unfit to lead another protest

Former Pitak Siam group leader Gen Boonlert Kaewprasit not only grossly miscalculated the expected turnout at last Saturday's Pitak Siam rally and shot himself in the foot with his outlandish idea of freezing democracy for five years, he also blundered badly by trying to seek army intervention after police fired tear gas at protesters. 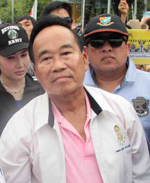 The retired general, also known as Seh Ai, has made the right decision, to step aside and not to lead any more anti-government rallies in the future.

I do not wish to rub salt into the old general's obvious wounds and I could not agree more with his decision, because if he does try to lead another protest, I believe, it would be doomed for sure. If he really wants to take part in an anti-government protest in the future, he should just be a follower like most of the other protesters.

Why? Let us take into consideration the remarks the general made to Bangkok Post senior reporter Wassana Nanuam about developments during the Pitak Siam group's Nov 24 protest, after police fired tear gas at the protesters at Makkawan bridge.

Gen Boonlert said he had tried to call 1st Army Commander Lt-Gen Paiboon Khumchaya on his cell phone, in the hope he would agree to step in to protect the protesters from the police, but to no avail. Then he tried to contact Army Commander-in-Chief Gen Prayuth Chan-ocha, hoping that he would come to their rescue. Again, his frantic call went dead with no answer from the receiver. Finally, he managed to reach Gen Dapong Rattanasuwan, deputy army commander, but the answer was negative.

How could Gen Boonlert have thought that the army top brass would step in simply because a group of protesters were attacked with tear gas by the police? And what kind of intervention had he envisaged? Call the police chief to order a stop of the use of tear gas? Or that army troops be deployed to replace the police?

The retired general should have known that the police were in charge of controlling the protesters and there was no way that the army would just step in without the consent of the police. And the use of tear gas in crowd control is standard practice by police the world.

Whether police overacted in their use of tear gas against the unruly protesters trying to break through a police blockade, ignoring advice to take the other route to the protest site at the Royal Plaza, is debatable. But the attempt to break through the blockade flew in the face of the protest organisers’ promise that the rally would be peaceful.

Instead of asking for army intervention for such minor incidents as tear gas attacks, what Gen  Boonlert should have done – and had failed to do – was to order the protesters at Makkawan bridge to use the other route, which might take longer time to reach the protest site but could have avoided the confrontation, and he would probably have the been able to prolong the protest that he earlier promised would last 1-2 days, instead of just nine hours before it was called off at dusk. 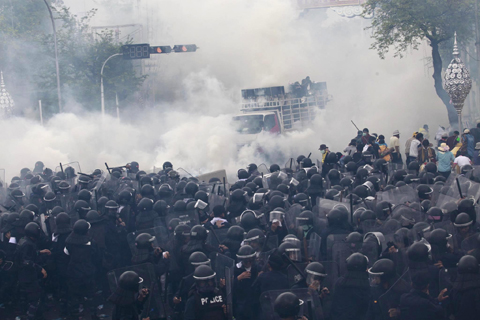 The problem was that the protest was poorly organised and coordinated. The general himself appeared to be a complete stranger to Samdin, who was supposed to control the protest group at the Makkawan bridge. When asked about Samdin, the general replied, “ Samdin who?”
But more disturbing was his remark that the protesters might need weapons because they could not fight with bare hands against the police if the protest was to continue. What kinds of weapons had he envisaged? The idea of arming the protesters should not have come into the mind of any protest leader advocating a peaceful demonstration, and especially not against the use of tear gas.

That is why I believe Gen Boonlert should never lead another protest.