Although the speech delivered by Prime Minister Yingluck Shinawatra at the Community of Democracy (CD) conference in Mongolia Monday was scripted, the message it conveyed, especially about democracy in Thailand, presumably reflects her actual political thinking -- a side buried deeply and troubling her soul for many years. 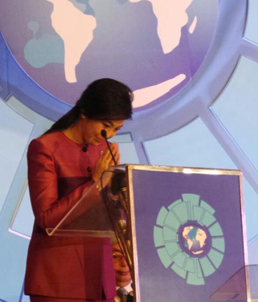 The speech revealed the other side of the prime minister, a side hidden from the public – that she is as embittered as her brother, fugitive former prime minister Thaksin, and the other clan members, over the coup which overthrew the Thaksin government in 2006 and the legacy left by the coup makers, which includes the charter-mandated independent organisations such as the Constitution Court.

In a rare departure from her usual conciliatory character and tone, Prime Minister Yingluck minced few words in criticising the 2006 coup, the Abhisit government and the independent agencies.

She also revealed, for the first time, how bitter she was about the 2006 coup.

"And if my family were the only ones suffering (from the coup), I might just let it be. But that is not just the case," she said, "projects and programmes started by my brother’s government that came from the people’s wishes were removed."

Aiming her gun at the independent agencies, she said that they had abused the power that should belong to the people for the benefit of the few rather than for society as a whole.

Then she put the blame on the Abhisit government for the crackdown during the red-shirt anti-government protest in 2010. She told the CD conference that many innocent people were killed by snipers and the movement was crushed, with their leaders either jailed or forced to flee abroad.

Her acrimonious attitude towards the coup and its legacy explains why she did nothing to restrain the red-shirt protesters who have been protesting against the Constitution Court, with their leaders openly making threats against the nine court judges.

So far, she has remained aloof from the red-shirt protest against the charter court and the attempt by her Pheu Thai Party to amend the charter.

But what the prime minister told the audience in Ulan Bator about the coup and its legacy, her family’s sufferings from the coup and the military crackdown against red-shirt protesters in 2010 is just half of the story, just one side of the story.

The other half of the story, for instance about the red-shirt protest, was deliberately omitted. She did not say anything about the armed men among the protesters, the protesters’ raid on Chulalongkorn hospital, the violence perpetrated by the protesters and the burning of buildings and ransacking of deserted shopping malls. Nor did she mention the fact the red-shirt leaders rejected the agreement reached between the Abhisit government and Veera Musikapong to end the protest to avoid the bloodshed, with early elections, but carried on the protest with a new objective – that is, to topple the government.

The prime minister also did not explain the political impasse before the coup and the widespread corruption in the Thaksin government.

But such is the attitude increasingly evident among members of the ruling party and their red-shirt army.