The 'mole' is inside the government
Opinion

The 'mole' is inside the government

Deputy Prime Minister Plodprasop Suraswadi is no stranger to controversy. It could be said he has a penchant for courting controversy, and a tongue so sharp and quick that even bad-mouthed fresh market vendors envy him.

"Garbage" was the word he used to describe the civic society groups who planned to stage a protest at the site of Asia-Pacific Water Summit held in Chiang Mai in May. He also threatened to have them arrested if they dared to protest there.

His threats prompted the provincial governor to find an alternative venue not far away from the site of the international conference to accommodate the civic society groups. 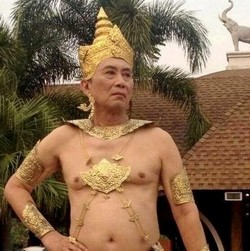 Plodprasop Suraswadi poses as Lanna founder King Mangrai at the Asia-Pacific Water Summit held in Chiang Mai in May.

Then, in addressing a rousing red-shirt crowd in Chiang Mai, Mr Plodprasop said he actually preferred the term ai hia for civic society groups - it means monitor lizard, and is a very derogatory remark.

But what was even more outrageous and provocative is the following comment Mr Plodprasop made to cheering red-shirts on the same occasion, regarding the government’s decision to cancel the planned construction of an international convention centre in Phuket.

"Is there any problem if (the convention centre) is not built? Perhaps, the next day it will definitely be built when (the people) of Phuket have realised our merits and vote for our people. Today, I do not build (because) I am not in the mood."

That seems to echo the infamous remark made some years ago by then-prime minister Thaksin Shinawatra, which triggered off an avalanche of protests from southerners, "Provinces which vote for the Thai Rak Thai party will be taken good care of first...".

It should not come as a total surprise that Mr Plodprasop’s remark has incensed Phuket residents. A protest was staged in the southern province this Friday morning against the deputy prime minister for his discriminatory and divisive remark. One of the protest banners, carried by a car which drove around the town of Phuket, read: "Plod pen sop (Plodprasop is a corpse), do not treat Phuket residents like buffaloes".

It is quite fortunate that the Phuket protesters did not respond in kind by maybe threatening to defy the government or to stop paying taxes in retaliation. Maybe it is because they are more civilised and love this country more than politicians in the like of Mr Plodprasop.

There are many more controversies surrounding Mr Plodprasop. These are just a few examples:

He was faulted by the National Anti-Corruption Commission for allowing the Si Racha tiger farm to export 100 Bengal tigers to China in 2002 while chief of the Forestry Department. The Office of the Attorney-General has decided to press charges against him this year.

During the big flood in October 2011, Mr Plodprasop, then science and environment minister, urged residents in Pathum Thani and upper Bangkok to evacuate in the face of the approaching floodwaters. The alarm was false, like the shepherd boy crying wolf in Aesop’s fables.

The big question is, did Mr Plodprasop blurt out the truth, the real reason why the government cancelled the international convention centre project in Phuket? Because most of them didn't vote for Pheu Thai? A clarification is needed, and quickly, if the government wants to calm the ire of Phuket residents.

Even worse than a lightning rod, Mr Plodprasop’s conduct makes even more foolish the outlandish claim by Deputy Prime Minister Chalerm Yubamrung about a conspiracy to overthrow the government by three business groups - supposedly the chicken trader, the mobile phone operator and the beverage tycoon.