Government brings trouble on itself
Opinion

Government brings trouble on itself

Resentful farmers angered by the cutback in the rice pledging price have threatened to protest in various parts of the country, putting the government in the hot seat with the possibility it may have to backtrack to appease its major voter base.

My sincere thanks to Ms Supa Piyajitti, finance deputy permanent secretary. And apologies for such a belated show of appreciation for her moral courage in exposing the losses incurred by the populist rice pledging scheme for the 2011-12 crops, although the figure, 260 billion baht, has since been corrected to 136 billion baht by her committee.

Without her disclosure of the losses accumulating from the scheme, which was followed by Moody’s Investment Service's warning Thailand's credit rating could be at risk of downgrading because of the massive budget hit, I wonder if the government would have ever back-peddled and slashed the pledging price of white rice paddy by 20%, from 15,000 baht to 12,000 baht a tonne from the end of this month.

I believe it was Moody's warning that finally woke up the government, particularly the Finance and Commerce ministries.

The 260 billion baht figure leaked from Ms Supa’s office, which led to her abrupt transfer to the post of inspector-general before she was subsequently reinstated, was strongly denied by both the Finance and Commerce ministries. 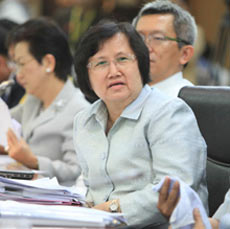 Supa Piyajitti at a meeting on the rice issue at Commerce Ministry in June, 2013. Photo by Tawatchai Khemgumnerd.

Many critics, including highly respected Ammar Siamwalla of the Thailand Development Research Institue, have long voiced strong objections to the scheme, denouncing the pledging prices as unrealistically high – 15,000 baht a tonne for ordinary paddy and 20,000 baht a tonne for hom mali, or jasmine, paddy - the likely massive corruption and the wasteful drain on the state coffers.

None of the critics opposed the notion that farmers should benefit from the scheme. But all criticism, constructive and well-meaning though it was, was brushed aside by the government.

From Day One, the rice pledging scheme was criticised as unrealistic. Its first priority was to get the votes of the farmers, with the actual benefits for the farmers only a secondary priority.

The government, especially commerce officials, should have known that farmers would never get the promised pledging prices, and that the differential between the prices set for pawned crops and the money that ended up in the farmers' hands would go into the pockets of others involved in the scheme. Farmers complain the 15% moisture content rule has been widely abused by millers to lower the price paid.

Farmers have always been taken for granted. Even when the National Rice Policy Committee decided to cut back the pledging price of white paddy, but not jasmine rice, farmers were not consulted, were not given a chance to voice their opinion, not asked if they agreed with the new price or not. Hence the widespread resentment and the threat of protests by farmers.

Many Pheu Thai MPs, too, are unhappy because they were left out in the cold, despite the fact they will have to go out and face the farmers in their constituencies and ask for their votes the next time there is a general election.

Provincial governors have been instructed by the government to talk with the unhappy farmers and convince them that they will still get a profit from their crops – 40% above the estimated production cost as declared by Commerce Minister Boonsong Teriyapirom – and not to travel to Bangkok to protest.

But the farmers’ resentment is, after all, a problem created by the government itself, and it is therefore the government's responsibility to deal with it.

The alternative is to backtrack on the National Rice Policy Committee’s decision and to amend the 12,000 baht pledging price to, say, 13,000 baht or 13,500 baht a tonne. After all, the cabinet has not yet endorsed the committee’s decision.

But what excuse could it give this time? To maintain fiscal discipline?