Sweet triumph for the 'garbage' and for transparency
Opinion

Sweet triumph for the 'garbage' and for transparency

The Central Administrative Court's ruling there must be public hearings on the 350 billion baht water management megaproject contracts before they go ahead should serve as a reminder to the government to be more transparent and more respectful of the public in the future.

The so-called "garbage"  won the first round of a legal battle to protect Thailand from the worst of the damage if the 350 billion baht water management plan is allowed to proceed without input from the people most affected, the local communities.

The Central Administrative Court on Thursday ordered the government to organise "thorough" public hearings in areas to be affected by the various projects under the ambitious water management plan before it enters into agreements with the successful bidders.

Nevertheless, the court’s ruling represents a sweet victory for Srisuwan Janya of the Stop Global Warming Association and the other civil groups who were contemptuously dismissed as "garbage" by Deputy Prime Minister Plodprasop Suraswadi when they tried unsuccessfully to rally in protest against the 350 billion baht megaproject outside the venue of the World Water Summit in Chiang Mai in mid-May.

It is also a triumph for the public in general, and for the principle of transparency and openness.

Like the devastating rice pledging scheme, which was thickly shrouded in secrecy, the water megaproject has completely lacked transparency from the beginning. Instead of going through the normal channels by submitting a financial bill to the parliament for an off-budget loan to cover the massive cost of the plan, the government enacted an executive decree to bypass parliamentary scrutiny.

Only sketchy information is available and accessible to the public about the ten "modules" of the mega-project. For example, the floodway project will cover the northern region, the central plain and parts of the western and eastern regions and may affect several hundred thousand people, yet most people in those areas are still totally in the dark regarding the exact route of the floodway and whether they will be kicked out of their homes or not. 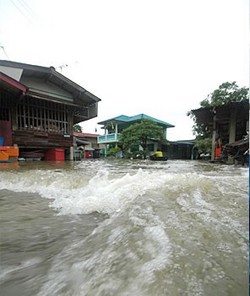 The B350 billion water management project is intended to prevent this happening again, but it is mired in a lack of transparency and suspicions of corruption.(Bangkok Post file pic)

Those relative few who do know the planned route of the floodway and the locations of the other projects may keep the information to themselves in order to line their wallets through land speculation.

Besides the lack of transparency and the denial of public participation in the decision-making process as guaranteed by the constitution, the credibility of one of the successful bidders, Korean Water Resources Corporation, or K-Water, seems to be in doubt. Although almost entirely owned by the South Korean government, the company was reported to be heavily in debt to the tune of 600 billion baht and was also criticised of lacking experience in implementing such a huge construction project such as the floodway.

A photo recently posted on the social media showing former prime minister Thaksin Shinawatra sitting next to a top executive of K-Water last August has raised suspicions that Thaksin might have a role in the company’s success in winning a 163 billion baht contract, the most costly of the ten modules.

The requirement to have public hearings will put the megaproject on hold for at least two years, according to Mr Sriwuwan. If the general opinion that emerges is negative, the planned schemes may have to be dropped for good.

The court’s ruling should serve as a no-nonsense reminder to the government of the need to be more transparent and, more importantly, to show more respect to the general public in its handling of any projects, not just megaprojects, that may have adverse impacts on the environment and the people.

The two trillion baht infrastructure development project is being aggressively pushed by the government, and is a another good example of the need for accountability. Who knows, it could even end up in the court room and meet the same fate as the water management plan.

Which explains why the ruling Pheu Thai Party - from the Man in Dubai down to the bottom - holds the Administrative Court and the Constitution Court in deep contempt and distrust, because they are standing firm.

Six people have been arrested on charges of running an online gambling ring with tens of billions of baht in circulation, following police raids at a hotel on Koh Samui and other sites