Locals left in the dark on plans for elevated 'roof' road

As a state project with an impact on the life of locals, construction of an elevated highway along Ratchadaphisek-Asok Road has to involve public participation _ a principle endorsed in the constitution. 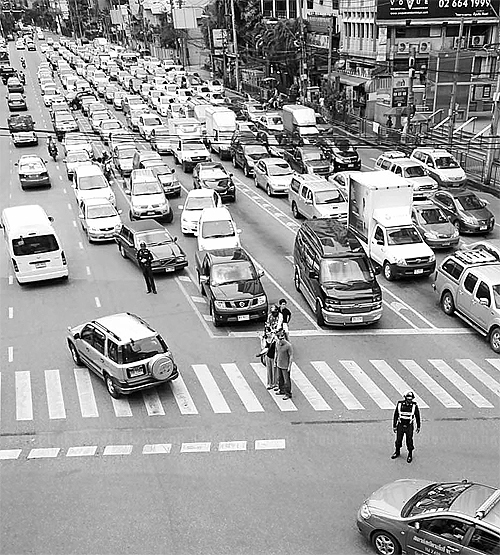 Congestion clogs Asok Road in the Sukhumvit area. The BMA’s plan to build an elevated highway to cover the road has been challenged by locals who believe the new structure is useless and will add to pollution. PATIPAT JANTHONG

But like so many state works, the public participation process of this particular project, proposed by the Public Works Department of Bangkok Metropolitan Administration (BMA), was something close to cosmetic _ at least until the locals became fully aware of the project.

The BMA has hired three consultant firms _ Wisit Engineering, Asian Engineering Consultant and Arun Chaiseri Consulting Engineers _ to design the elevated structure, dubbed as a "roof" by locals, from Rama IV Road to Rama IX Road, and to canvass public opinion about the project, which is to cost about 4.5 billion baht. The firms are required to submit their final report to the BMA by end of this month.

The consultants already interviewed stakeholders on April 10 and between May 17 and 25.

The process, however, has drawn fierce criticism from a group of locals who complain they have been left out in the cold. After missing the previous meetings, which they say they did not know about, the locals formed the "Rak Asok" (Love Asok) group, which is affiliated with the Siam Society.

Rak Asok members organised their own forum at a Sikh temple on Asok Road on June 1 to discuss the project.

They invited representatives of the consultancy firms to listen to their views. The number of participants at the Rak Asok meeting was much higher than at the consultants' forums.

At the Rak Asok event, many participants complained of being "poorly informed", not just about the project but also about the public hearing process and, as a result, they had no chance to attend the official meetings.

One participant recalled an invitation to the May forum was placed at her front door late in the morning of the actual meeting day. With such short notice, she could not attend the forum. Several participants said they were treated the same.

An officer at the Asian Engineering Consultant Co conceded the number of participants attending the company's forum appeared small, but he said this was because the forum mainly targeted community leaders.

It was up to individual leaders if they wanted to include people in their community in the process, he said.

Besides, it was not a coincidence that there were different conclusions reached at the different meetings. According to the consultants, participants in the April and May forums agreed that the traffic problems on Asok Road must be solved, and no one opposed the project.

Those attending the Rak Asok forum, however, challenged the notion that the elevated structure would be a sound solution to Asok's traffic woes given that both Rama IV and Rama IX roads are also congested and can hardly take more vehicles from the elevated part.

To them, the project, initiated in the 1960s to make Asok part of a Bangkok ring road, is an outdated plan as the city _ not to mention land use _ has changed tremendously since.

Opponents of the elevated road say it will be an eyesore that threatens the Siam Society's Kamthieng House Museum, which is a major city landmark.

They say it will add to pollution in the area, as the "roof" will cause dust and engine fumes to linger longer. Also, residents will have to be evicted from the area and the land value will likely fall.

The consultants may well have overlooked these concerns in the prior meetings, well before the locals came together to take part in the process.

The group members echoed their opposition to the project again during another meeting last Saturday _ a prelude to their final meeting this morning at Bangkok Chada Hotel in Huai Kwang district.

With true participation, the consultants will have to rewrite their reports, while the BMA will have to listen more carefully and review the project more seriously.