The making of a 'husband-and-wife' parliament
Opinion

The making of a 'husband-and-wife' parliament

As public attention is diverted to the much-hyped political reform forum, the government is attempting to amend the charter to transform the Senate into yet another tool to fulfill its ambition of complete control of parliament.

If everything goes according to the Pheu Thai-led government’s plan, we may have a new fully elected Senate in which most members will either be the wives or husbands, sons or fathers of the MPs in the House of Representatives.

Cynics have labelled this type of legislature a "husband-and-wife" parliament, and it seems to be unique to Thailand -- and a definite part of the government’s political reform roadmap.

The plan's first stage was being executed in the parliament today, Tuesday, when senators and MPs were to start deliberating the second reading of a constitutional amendment bill regarding the makeup of the Senate.

Under the provisions of the amendment bill, the number of the senators would be increased from the current figure of 150 to 200, with all of them being elected. That sounds great and politically correct, too, as it is in line with the democratic principle, at first thought. 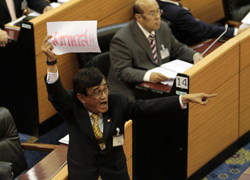 A member of parliament holds up a paper saying "slave parliament" in the debate on whether senators should be all elected in the House on Tuesday, Aug 20, 2013 . (Photo by Chanat Katanyu)

Why should we have appointed senators instead of elected senators? What’s wrong if the wives are in the Senate while their husbands are already in the House? The people should have a say in electing their representatives to the Senate in the same the way they have been electing members to the lower house. These are just a few of the arguments put forward by those in favour of the charter change.

I am tempted by their arguments, especially the point about democracy that the Pheu Thai Party and their red-shirt supporters claim to champion. But then I wonder; where is the check-and-balance mechanism which is also a part and parcel of the democratic principle, to protect the minority and to prevent the majority in the parliament misusing, or even blatantly abusing, their power?

I am really not coinvinced that the wives or husbands in the Senate will sincerely check the performance of their spouse in the House.

The Pheu Thai Party is clearly and openly contemptuous of these independent organisations, especially the Constitution Court which ordered the dissolution of its two predecessors, the Thai Rak Thai and Palang Prachachon parties, and the banishment from politics for five years of the entire executive committees of the two parties.

The party, too, has long wanted to clip the wings of other judicial bodies such as the Administrative Court and the Supreme Court’s criminal division for holders of political positions.

The Administrative Court is held at fault for blocking the government’s 350 billion baht water management project and is likely to be used by the party’s opponents to block the government’s 2.2 trillion baht high-speed trains megaproject. The Supreme Court’s criminal division for holders of political positions handed down the two-year prison term for fugitive former prime minister Thaksin Shinawatra for abuse of state power in the purchase of Ratchadapisek land by his then wife.

I am not an alarmist. I'm not trying to trigger false alarms about all the political exercises already taking place or about to take place, such as the political reform forum due to kick off this coming Sunday.

But the "husband-and-wife" parliament and the attempt to neutralise the independent organisations and the judiciary are possible scenarios if the government is successful in making changes to the makeup of the membership of the Senate and in writing a new charter under the guise of a political reform forum.

Thailand’s parliamentary system may plunge to a new low and the winner of the next election or, at least, the Senate election, will not be just any winner, but the winner who will take all.

It will not be smooth sailing for the government. There still remains the main stumbling block, which is the Constitution Court -- which will be the last resort of the opposition Democrats and the anti-Thaksin camp in the Senate to block the charter amendment bill.

India the billionaire raj? Not so fast