Why respect the law if the govt doesn't?
Opinion

Why respect the law if the govt doesn't?

The government’s expansion of the enforcement of the Internal Security Act to cover all of Bangkok and Nonthaburi and Bang Phli district of Samut Prakan and Pathum Thani’s Lat Lum Kaew district is meaningless, as it has already been defied by thousands and thousands of protesters

Tens of thousands of demonstrators continued to rally on Ratchadamnoen Avenue on Monday night after Prime Minister Yingluck Shinawatra made the announcement on a national television and radio broadcast.

It is effective from today, however many demonstrators were staying put at the protest site this morning. Those who made the symbolic seizures of the Finance Ministry, the Foreign Ministry and the Public Relations Department on Monday were remaining inside the compounds of those offices, although not within the buildings. 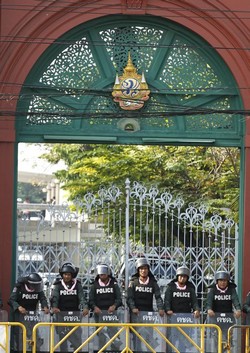 Riot police guard the entry to parliament while inside the opposition begins its censure debate against Prime Minister Yingluck Shinawatra on Nov 26, 2013. (EPA photo)

One very big, very valid, question asked by the protesters is why should they respect the ISA when the government itself has rejected the Constitution Court’s judgement on the draft constitutional amendment.

Moreover, the prime minister has refused to ask for the return of the rejected amendment from the palace, claiming that the case is unprecedented and needs to be studied first.

No, it is not over yet. A group of Pheu Thai MPs have lodged a complaint with the Department of Special Investigatiion, accusing five charter court judges who voted down the amendment of sedition. As usual, DSI chief Tarit Pengdith appeared overly enthusiastic to take up the case.

The logic is simple and straightforward. If the government and the main governing party, Pheu Thai, have rejected the court's authority, rejected the law of the land, why should the protesters and the people in general abide by the Internal Security Act?

If anyone is to blame for this political mess and the country's steady descent into a state of lawlessness it is the government, the parliament and the Pheu Thai Party.

Yet, the anti-government protesters must follow the path of ahimsa -- a Buddhist and Hindu doctrine holding that all forms of life are sacred and urging the avoidance of violence -- in their fight against the "Thaksin regime". The use of civil disobedience as a gesture of protest against the government, which has become an acceptable practice in western democracies, should be done in a manner which causes the least impact on the general public.

The symbolic seizure of the Finance Ministry, the Public Relations Department and the Foreign Ministry by the protesters on Monday should be brief. They should be withdrawn quickly since they have achieved their goal, which is to send a message to government officials to join their cause.

Withdrawal would not be a sign of defeat. The protest leaders smust be well aware that the Thaksin regime is deeply entrenched and cannot be dismantled in just one big push, at least not without unpredictable consequences.

But the outpouring of the people’s power on Sunday. in which up to one million people showed up at Ratchadamnoen Avenue and nearby areas is indeed phenomenal and should serve as a warning to the regime, its master and its cronies -- that they should never ever take the people for granted.