So many questions still to be answered

It seems self-exiled former prime minister Thaksin Shinawatra is indirectly commanding the police operations to deal with the protesters, with the appointment of his trusted man to take charge of the Centre for the Administration of Peace and Order (Capo).

It was reported that Pol Gen Pracha from Capo was removed because he declined to announce the government’s statement retaliating against protest leader Suthep Thaugsuban.

Signs of the government’s hardened stance against the protesters are apparent, with the latest being the  dropping of leaflets from a police helicopter on Tuesday morning, "requesting" the protesters to disperse.

The government has stepped up the use of TV Channel 11, with Deputy Commerce Minister Nattawut Saikuar, a red-shirt co-leader, moderating a programme on a daily basis to attack the protesters - especially its leader  Suthep, who is now facing arrest on an insurrection charge filed by the metropolitan police. 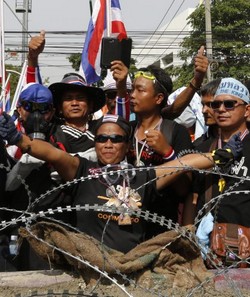 Protesters jubilate outside the Metropolitan Police Bureau head office on Dec 3, 2012, as they learn police will remove the barriers and allow them inside. (EPA photo)

Police guarding Government House and the Metropolitan Police Bureau were regularly supplied with teargas and the guns used to fire the gas and rubber bullets.

Live ammunition has been used against the protesters, but police deny being responsible.

The Capo spokesman said on Monday that no live ammunition was used against the protesters and that no protester was shot with live ammunition, a conclusion made after a check with Hua Chiew hospital.

But Dr Vicharn Piewnim, chief of  forensic science of Ramadhibodi hospital, confirmed on Monday that one protester was shot in the chest and another shot in the leg with 9mm bullets. Another protester was hit by a rubber bullet used in riot control.

Capo also claimed that no chemicals were mixed in the water used against the protesters in front of the Metropolitan Police Bureau and Government House.  The police were armed only with shields, teargas and water cannons.

Then, please explain why the water was a purple in colour, and how come protesters suffered burns on their arms when they were exposed to the water.  It was reported that the water used by the police against the protesters was mixed with sulphuric acid.

Please stop telling lies. How far and for how long do the police think they can lie to the people?

Then, out of the blue, police have stopped firing teargas and allowed the protesters to enter the Metropolitan Police Bureau and Government House  grounds - two major government fortresses just now symbolically occupied by the protesters.

The peaceful outcome represents not just a victory for the protesters but a triumph for the country - that is,  sensibility still prevails - before it slid into a state of anarchy.

But there are still questions yet to be answered.  What now for the government and Prime Minister Yingluck Shinawatra?  Will she resign, or will she dissolve the House?

What about the protesters’ demand that the government handover of administrative powers to a so-called "people's council", so that a blueprint can be drawn up to pave the way for a new order for the country?  What about the "Thaksin regime"?

Will police arrest Mr Suthep, will he be forced to surrender and face the insurrection charge?  And, last but not least, what criminal offence can be lodged against fugitive former prime minister Thaksin Shinawatra for his role in the government’s handling of the protesters, which has led to death and injuries, and the damage done to the country as a result of this unprecedented political crisis?