After the floods, have lessons been learnt?
Opinion

After the floods, have lessons been learnt?

While much of the media attention in Thailand is focused on the latest bout of "red-yellow" political tensions, it is worth remembering that about two years ago much of Central Thailand was submerged in floodwater, causing millions to suffer. 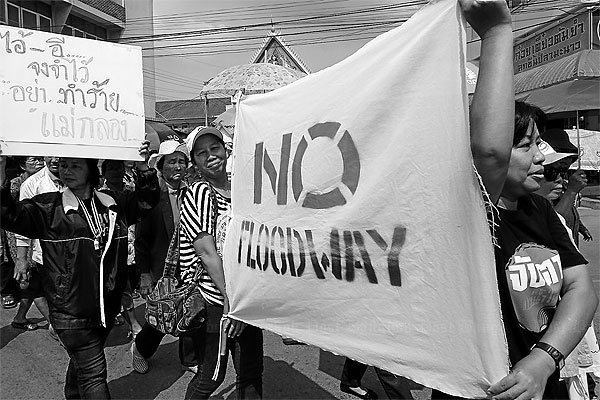 The floods killed more than 700 and cost the economy at least US$45 billion (1 trillion baht). Looking back at these floods now, two important questions spring to mind: First, have we learnt lessons from them and, second, is the country now less vulnerable to future floods?

To answer the first one, it is revealing that the government's top leaders blamed nature and climate change as the sole source of the floods. For example, Prime Minister Yingluck Shinawatra declared, "We're fighting against the forces of nature." Finance Minister Kittiratt Na-Ranong also said the flooding "has to be the result of climate change and global warming" and "If you ask me whether the government is responsible because of its malpractice, mismanagement or ignorance, I have no evidence to believe so."

Blaming only nature and climate change as the causes of the floods leads to the belief that nature needs to be controlled. The government does this by building infrastructure, such as dams and dykes, which are supposed to regulate water and protect populations from water.

This preference for construction projects is clearly seen in the government's massive 350-billion baht water management plan which was devised after the floods.

But we have now learned several lessons about the problems of relying only on infrastructure to deal with flooding. In short, it is too costly, never enough, and hard to manage.

Earlier this year Yusuke Amano, a water specialist of Japan International Co-operation Agency (Jica), said that several proposed new dams or floodways in Central Thailand are not necessary for reducing the threat of floods in the Chao Phraya River Basin. Instead, he proposed a counter-scheme which costs only 190 billion baht.

In addition, dams and dykes can be counter-productive because they create a false sense of security. In the areas protected by them, additional houses, offices, and factories are built. Consequently, when floods exceed the design capacity of these flood barriers, higher losses occur, which was the case in Bangkok two years ago.

Further, mismanagement of this infrastructure can actually worsen the extent of the flooding. Two years ago the managers of the Bhumibol and Sirikit dams retained too much water early in the year and later in the year had to release 7 billion cubic metres of water to stop them from breaking. This outpouring of the dams' water combined with the heavier than usual rainstorms in the second half of 2011 caused a huge amount of water to flow into the Chao Phraya Basin.

Moreover, this misplaced analysis can divert attention from the underlying societal causes of the 2011 floods. Heavy rainfall was certainly one of the causes of the destruction wrought by the floods. Significantly more rain fell in 2011 than average: There was 43% more than the average rainfall measured from May to October between 1982 and 2002.

However, this disaster was not simply "natural"; a significant cause was also human decisions and actions which interacted with this heavy rainfall to create the devastation of 2011's floods.

These actions include not only the aforementioned mismanagement of infrastructure but also those linked to haphazard urbanisation. Filling hundreds of canals to make way for roads and buildings and placing heavy concrete on the land's surface increased the amount of run-off.

Over-pumping of groundwater by factories caused extensive land subsidence which debilitated flood protection capabilities. The illegal construction in floodways and green zones by real estate developers harmfully encroached on to natural drainage channels and flood storage areas. The most powerful groups in Thai society profited the most from these activities while changes to the physical environment of Bangkok made all of those living there more vulnerable to floods.

As Craig Plumb, of the real estate firm Jones Lang LaSalle, argues, land development in Bangkok is "influenced as much by 'who owns land where' as by any sound urban planning principles". These are still big problems yet to be adequately addressed.

This leads then to the second question: Is the country less vulnerable to floods now?

The answer is not uniform. Looking back at 2011, those in the inner city of Bangkok, including the richest and most powerful of Thai society, stayed dry at the expense of those in the outer city. As the massive run-off slowly swept south, the government erected huge sandbag barriers to protect the city's central districts. While this scheme kept the centre dry, those outside of the centre bore a heavy cost: These walls contained the floodwaters in northern, western, and eastern areas, submerging these areas for weeks. Further, the inner city of Bangkok was better protected by dykes and water pumps than the outskirts of the city was.

Similarly now, in Ayutthaya province, where the government has helped factories build towering walls to keep themselves dry, and elsewhere, those inside these enclosed areas are safer while those outside them are more vulnerable.

Just as in 2011, a number of local communities this year have protested at this injustice. For example, in Sukhothai, a number of residents pleaded with government officials to open the floodwalls of the airport to drain the surrounding rice fields.

Also, the new water management plan could actually reduce the capacity of certain populations to cope with floods. In Samut Songkhram, thousands have protested against a proposed floodway project, a component of the government's water scheme, saying that the floodway would hurt their fishing activities. This reduction in their livelihood options would reduce their resilience to future floods. Overall, while some people and businesses are safer now, others are just as or more vulnerable.

Meanwhile, many segments of the population are just as vulnerable to future storms and rainstorms, which are projected to become more frequent, intense, and unpredictable due to climate change.

Therefore, what is urgently needed is a revised water management plan incorporating policies that do not require infrastructure development. In particular, these policies should be based on the idea that we should not try to control floods but live in harmony with them. In the 19th century, this concept fit Bangkok's relationship with the Chao Phraya: It was a water-based city, full of canals and river houses.

Policies based on this vision have proven to be more cost-effective, long-lasting, and equitable in other countries. They range from community-based livelihood adaptation and disaster risk education to the restoration of wetlands and rivers and sound land-use planning, such as the Netherlands' successful programme which gives more room for rivers to spread out when they flood. Adopting more of them would help reduce the vulnerability of all Thais to future floods.

Danny Marks is a PhD candidate in human geography at the University of Sydney.

Danny Marks is an Assistant Professor of Environmental Politics and Policy at Dublin City University.