Demand for a less-flawed democracy
Opinion

Demand for a less-flawed democracy

New York Times Southeast Asia correspondent Thomas Fuller has quite an impressive profile. He has reported from Asia since 1997 when several countries, including Thailand, suffered financial meltdown. He covered the US invasion of Iraq, the Arab Spring and the list goes on and on.

Profile aside, the quality of his reportage, especially about the current political upheaval in Thailand, is indeed questionable and shallow too.

Take for an example his recent piece about Thailand headlined "In Thailand, Standing Up for Less Democracy" in which he wrote: "In a world now accustomed to democratic upheavals, including the Arab Spring and the Saffron and Orange Revolutions, the weeks of political upheaval in Thailand stand out for one main peculiarity. Protesters massing on the streets are demanding less democracy, not more."

First of all, the definition of democracy. It is more than people just going into a polling booth, inserting a ballot into the box and then leaving everything in the hands of their representatives and their parties, so they can do anything at all they wish, such as introducing a bill to exonerate a fugitive, rushing questionable projects through the parliament despite protests from the people about the potential effects of these projects, which have only inadequate environmental impact studies, or no study at all. 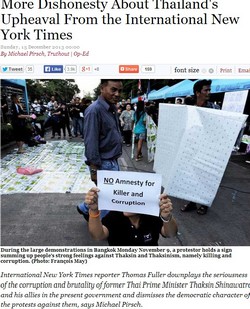 An article by Michael Pirsch captured from the website of truth-out.org

Democracy, for the people, is not about a few minutes of exercising their right at the polling booth, which will return the same old incompetent or corrupt politicians to the parliament and then into the government.

The Thai people are sick of this vicious circle of incompetent or corrupt form of governance, be it by the Democrats, Pheu Thai or other parties which win elections.

They are not against elections as a matter of principle, but they want change for a better Thailand and a better future for the country. They want to put their house in order first, before we all go to the polls.

Yes, the People’s Democratic Reform Committee’s call for the ouster of caretaker prime minister Yingluck Shinawatra and the formation of a so-called "people’s council" to draw up a reform blueprint is undemocratic. The PDRC should be more flexible in this regard. The issue should be settled on the negotiating table, if both sides really want reform.

The demand for reform before the election, which will take place in the middle of intense conflict, is sensible and should not qualify as a demand for less democracy. It is a demand for a less-flawed democracy.

The protesters are crying out for democracy too, but a democracy which is liberated from the tentacles of the corrupt Thaksin regime. Whether this can be fully or partially achieved, we will see. But the house must be put in order first, before we go to the polls.

I will not go into others biases expressed by Fuller in this article or previous ones in the NYT about the current political conflict.

Read those. It will give you an eye-opener about the other side of the story!