It's the mother of all corruption cases, those phantom government-to-government rice deals.

Yes, the fake, fantasy, inflated, nonexistent - call it what you will - government-to-government rice deals between the Thai government represented by the External Trade Department of the Commerce Ministry on one side and two Chinese firms, GSSG Import and Export Corp and Hainan Grain and Oil Industries Trading Company.

The case is extraordinary and should serve as a lesson for us about how greedy and shameless these crooks masquerading as politicians, officials and businessmen have become these days. It amounts to broad daylight robbery, as if these criminals were above the law. 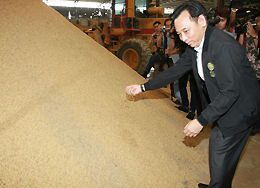 They seem to have believed they were untouchable because the law enforcement machine is on their side, or has become dysfunctional.

But they were wrong. There are still decent, honest people who cannot stand their blatant and outrageous exploits. Thanks to whistle blower and former Democrat Party MP Warong Dejkitvikrom and the National Anti-Corruption Commission (NACC).

The NACC's decision on Thursday to file corruption charges against former commerce minister Boonsong Teriyapirom, former deputy commerce minister Poom Saraphol, and 13 other individuals involved in the fake Chinese rice deals is indeed welcome. It injects some refreshing air into the overpowering stench of the out of control corruption scourge.

The University of the Thai Chamber of Commerce’s recent survey concluded the loss of taxpayers’ money to corruption this year could be as high as 300 billion baht, and is still rising.

Caretaker Prime Minister Yingluck Shinawatra, in her capacity as the chair of the National Rice Policy Committee, is now the subject of an inquiry by the NACC for alleged neglect of duty under Article 157 of the Criminal Code.

The actual amount of rice involved in the deals is still thickly clouded in secrecy, because the senior officials at the Commerce Ministry, from the minister down to those involved, will never tell the public. They claim all information relating to the deals must be treated as confidential. We can guess why.

However, it was believed that the amount of milled rice in these G-to-G deals was about five million tonnes, out of a total of seven-plus million tonnes claimed to have been clinched by the Commerce Ministry.

Ex-commerce minister Boonsong cried foul, protesting that he was unfairly treated by the NACC  because he was not given a chance to defend himself by the graft busters.

But dear sir, you will have all the chances you could want to defend yourself in court, probably the Supreme Court's Criminal Division for Holders of Political Office. And your complaint of not being fairly treated, did you treat the taxpaying public fairly when you were in the office? When they asked for the truth about all the rice sales, including the G-to-G deals, information they have the right to know, it's their money, the only answer from you was that the details "are confidential".

The prime minister herself has always been untransparent and unhelpful when asked to shed light on any rice deals, including this outrageous Chinese rice deal. Perhaps, she knew nothing about it because she had no interest whatsoever in the rice sales and the rice pledging scheme as a whole.

But as the chair of the National Rice Policy Committee she cannot escape responsibility for the wrongs committed by those under her supervision. There are no excuses, because she had been warned on countless occasions by a host of critics, among them the Thailand Development Research Institute, the Rice Exporters Association and reports in several newspapers, including the Bangkok Post, to look into the corruption problem and to scrap the rice pledging scheme.

All the well-intentioned advice and suggestions were completely ignored -- simply because, in her mindset and those of the other Pheu Thai people, they came from people on the opposite side of the government.

"We warned you before!" her critics are saying today.

CHON BURI: A woman was found dead inside a smoke-filled vehicle in the grounds of her father's home in tambon Khao Mai Kaew, Bang Lamung district, on Wednesday morning, police said.

PHNOM PENH: A Cambodian province popular with tourists has banned the trade and slaughtering of dogs for meat, saying that canines are loyal and capable of protecting property and even serving in the military.

Lives at risk as trafficking in faulty masks surges: UN

VIENNA: Lives are at risk as the new coronavirus pandemic has led to a surge in the trafficking of substandard masks, sanitisers and other medical products, the UN warned Wednesday.