Back to square one
Opinion

Back to square one

So we are back to the square one – thanks to the Constitution Court's ruling on Friday to void the Feb 2 election.

What does the court's ruling mean anyway? It means Thailand will go back into election mode with a poll to be held within 60 days amidst the seemingly unbridgeable political conflict, with the same key political players, namely the ruling Pheu Thai Party, the opposition Democrat Party, the anti-government People’s Democratic Reform Committee (PDRC) and the red-shirt United Front for Democracy against Dictatorship (UDD).

The court's ruling was not surprising. It was anticipated by Pheu Thai heavyweights including former parliament speaker Bhokin Bhalakula and caretaker Labour Minister Chalerm Yubamrung. The only thing surprising is that the party seems to be embracing the court's decision – a sharp contradiction to the position adopted on Tuesday when its executive board issued a statement threatening to defy the court's ruling.

The Pheu Thai Party has scheduled a meeting of candidates to prepare for the next election – to be staged of course by the same Election Commission (EC) that the party holds in contempt and suspicion.

It remains to be seen whether the EC will again advise the government to go slow on the polls, as it did for the Feb 2 election, given that the political situation has not changed for the better. The country remains as politically divided as ever and the two rival political camps – the anti-Thaksin Shinawatra and pro-Thaksin forces – are no closer to resolving their conflict on the negotiating table. 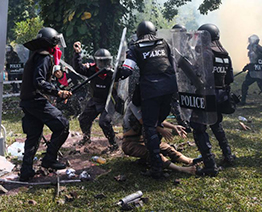 Anti-government protesters attempt to storm the Thai-Japanese Stadium in Din Daeng on Dec 26, 2013. The protesters wanted to disrupt the general election ballot number draw at the stadium but clashed with police. (Photo by Nattapol Lovakij)

Suthep Thaugsuban, secretary-general of the PDRC and former Democrat Party powerbroker, announced to supporters at Lumpini Park on Thursday night that his movement would continue to oppose and obstruct the next election until there is national reform.

Whether the Democrats will boycott the new election remains to be seen. The party is not likely to make a decision soon and has ample time to make its position known.

Besides obstructing the election, the PDRC will more than likely persuade its supporters to boycott the poll. Many eligible voters in the southern region and in Bangkok are likely to follow Mr Suthep's lead.

So the possible scenario is that we have to go through the same messy and violent experiences that characterised the lead up to the Feb 2 poll. The December clash between police and protesters at the Thai-Japanese stadium in Din Daeng, which left one protester and a policeman killed and scores injured. Advance voting and election day confrontations between protesters and pro-government elements, and blockades of provincial halls to prevent polling from taking place.

Pheu Thai appears more eager than the other parties to go into the election battle. Unsurprisingly it wants to reclaim the legitimacy of governance for another term.

The party is also confident that it will emerge the winner – if not the absolute winner.

But with a possible repeat of the violent Feb 2 poll debacle, is it worth going through that mess again?