The month of May is at times an ominous month for Thailand. In 1991, the military staged a coup against a civilian government, arguing it was corrupt.

Soldiers on guard at the Army Club on the first day of talks between rival parties in the political conflict before the military’s eventual coup decision. (Photo by EPA/Narong Sangnak)

There followed in May 1992 bloody incidents whereby a military-headed government clashed with civilian demonstrators who were demanding return to democratic rule and an elected prime minister.

There were scores of deaths, injuries and missing persons and disappearances and, as a consequence of the tumultuous events, the military ceded power to civilians. Elections followed and in 1997, and Thailand’s sixteenth constitution — the most people-oriented to date — was born.

After a decade of democracy in the country, a military coup took place in 2006 as a backlash against an ultra-strong civilian prime minister, also the target of alleged corruption, who then went into exile.

This was followed by a new constitution — Thailand’s 18th — in 2007 which contained a number of provisions to discourage accumulation of power by the executive branch of government and more checks and balances against the latter, especially through judicial channels.

In the meantime, a number of civilian administrations came fleetingly to power, compounded by a growing divide between various political colours.

The month of May 2010 then witnessed major clashes between those constituencies, epitomised by a civilian administration close to the traditional bastions of power and backed by the military on the one hand, and civilian masses loyal to the ex-prime minister in exile on the other. It was a case of the the old regime versus the new regime.

Yet, ironically, the latter would later be voted back to power by the electorate. 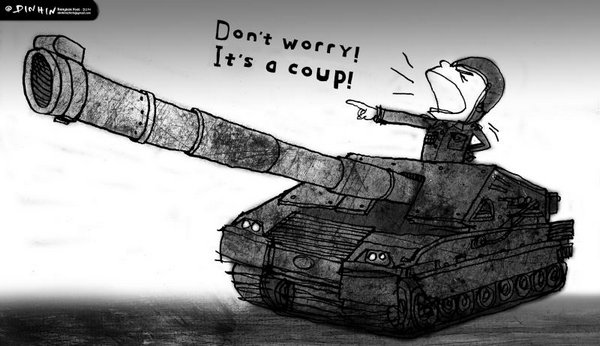 Now in May 2014, the army declared martial law to bring both "regimes" to the negotiating table, after the dissolution of parliament several months earlier and in the wake of a judgement from the Constitutional Court ending the tenure of the interim prime minister and some of her ministers who epitomised the new regime.

Then, the shock: a coup.

The two bloody episodes of violence in 1992 and 2010 were different in substance. The earlier conflict was, in reality, between military rule and civilian democratic aspirations, while the altercation in 2010 was between two civilian platforms, albeit with military support for one of them.

At this juncture, it may be worth highlighting some of the lessons learned from the past for the political quagmire in 2014.

Many of the problems today are also due to the coup of 2006 which laid the groundwork for more control over the executive branch of government but which also politicised and polarised the process leading to further uncertainties.

As for the imposition of martial law, while some quarters claim it is different from a coup (because, in theory, the remnants of the interim government remain in power and have not been overturned by the military), in substance it is similar to or equivalent to a coup, especially as it covers the whole country.

The military holds the effective reins of power, the government becomes compliant towards military fiat, and the various orders following from martial law constrain basic rights, such as freedom of expression, conflict with international standards and civilian rule. In any case, we have ended up with a fully fledged coup.

The preferred orientation is to return to civilian rule substantively and expeditiously.

Second, respect democracy and "one person, one vote”.

Democratic proponents then and now advocate respect for the principle of "one man/woman, one vote" and that there must be free, fair elections and respect for majoritarian rule, while not forgetting the voices of minorities and marginalised groups.

The right to vote is a universal right and it is not based on wealth or educational attainment. An illiterate or uneducated person has as much "right" as everyone else, as is manifested so clearly and in an exemplary manner in India, the world’s biggest democracy.

This was the main hue and cry in 1992 in the fight to remove a government run by the military.

A military general ascended briefly to the premiership even though in 1991 he had already promised not to take up the post of prime minister.

This triggered a public outcry against the unelected, military premier and entrenched the notion that the prime minister must be the product of democratic elections.

The quandary today, in 2014, is whether an interim unelected prime minister is acceptable, pending elections which should ultimately pave the way for an elected premier.

The appetiser accompanying democracy is to devolve and decentralise power so that the latter is shared more and people feel a greater sense of belonging. The process helps as a catharsis for political frustration and pugilism.

Why not have regional/local assemblies and elections where the people can have a greater voice in their regions and localities, as well as the parliament?

Regional ministers? These should be coupled with equitable policies to spread wealth and resources. Reform of the taxation system, land holdings, capital transfers and wealth invites creativity and action to share the rice pudding.

Fifth, a balance between checks and balances.

All democratic systems require checks and balances, such as separation of powers and functions between institutions. While the three pillars — executive, judiciary and legislature — are common features, more is needed.

Thus, the need for strong civil society, media and independent entities. Thailand’s 1997 constitution introduced, for the first time, some of these checks and balances, such as the Constitutional Court, the Administrative Court and the Human Rights Commission.

Yet, the 2007 constitution emerging from the 2006 coup shifted the balance between these entities. A challenging question today is to establish an equilibrium between the checks and balances, on the one hand, and the executive branch of government and their allies, on the other.

The orders from the top — the leaders (whoever they may be) — should also be clear about avoiding resorting to force.

Humbly, good leadership should know when to cede, to compromise and share power, bearing in mind the basics of democratic rule founded on rights for all and peaceful settlement of disputes.

Professor Vitit Muntarbhorn is a Distinguished Scholar at Chulalongkorn University. He has helped the UN in a variety of capacities, including as an expert, consultant and Special Rapporteur.

A passenger plane went missing in Nepal on Sunday with 22 people on board, its airline said.