It is a morally disturbing fact that most if not all foreign illegal migrant workers have been exploited in both their home countries and in Thailand.

Back home they have to pay the brokers, the human traffickers, who smuggle them across the frontier - not through the proper border checkpoints - into Thailand.

A Karen maid I know said she had paid 12,000 baht for the trip from the border right into Bangkok. She believed the fees she paid were to be divided between Thai officials and the Burmese smugglers.

Arriving in Thailand is only the beginning of the exploitation by a list of predators - immigration officials, other police, and employers. 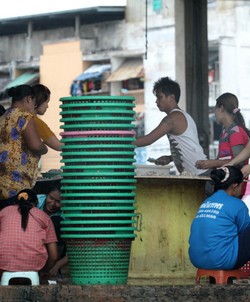 Housemaids are probably luckier than other workers because they are less vulnerable to encounters  with police and immigration officials, as they just deal with their employers. However, it depends on the  employer's morals whether maids are exploited or not.

I have a friend who used to work as a foreman at a condominium construction site in Sukhumvit area. He  said the company hired many illegal migrant workers from Cambodia and had to pay police each month, but the payment came from the workers' salaries not the company's own funds. They were each deducted 1,500 baht a month for the police payments.

The illegal Cambodians were paid a starting wage beginning at 175 baht a day. The only worker paid the legal minimum wage of 300 baht a day was the head of the illegal workforce,  who had five years' experience working for the company.

The company was visited four or five times a month by immigration, local and tourist police -  who all demanded separate payments.  These unscrupulous officials, he said, often arrived in a group of four or five and in plainclothes.

They would come into the field office at the construction site for their payments. If no payments were forthcoming they would search the camp site and the worker's lodgings in search of illegal  workers.  This  meant that construction was disrupted so, in most cases, the officials were paid.

It will indeed be welcome if the National Council for Peace and Order (NCPO) is really serious about solving the problem, and ensure all are registered and have legal rights. As promised by the junta, the workers will be fairly treated and accorded basic services many of them have been denied, such as health care.

It is unfortunate that someone planted a false report of a crackdown in the social media,  resulting a mass exodus back home. According to the governor of Oddar Meanchey, about 150,000 Cambodians have fled home since the exodus started last Thursday.

The NCPO itself seems to have underestimated the severity of the problem from the beginning. Repeated denials by the junta spokesman and other officials failed to stem the mad rush for home by Myamar, Cambodian and Lao workers. Finally, on Monay night, the NCPO came up with an official announcement denying a crackdown and saying there would be just some new measures put in place to fix a protracted problem.

The impact of the exodus has already been felt in industries which are dependent on illegal workers  - namely construction, seafood processing and fisheries - to the extent that the Federation of Thai Industries had to speak out and urge the junta to step in to resolve the problem quickly.

Owners of fishing boats, construction contractors and seafood processing operators have complained loudly about the sudden loss of manpower, but have failed to looked at themselves in the mirror. How many of them dare to admit that they have treated the illegal workers unfairly?  How many of them have paid these workers the minimum wage? How many of them have provided basic facilities  at their premises, such as clean drinking water and basic health care?

They should be ashamed of themselves for exploiting these poor migrant workers and must atone and introduce major reforms if they really want help from the new regime.

The exploitation of illegal migrant workers is not a problem for Thailand alone to resolve, but also for Cambodia and Myanmar. There are at least a million of their citizens working illegally in Thailand.

The three governments must cooperate to resolve the problem for their mutual benefit. These migrant workers must be treated in a fair and reasonable manner. We need them.