The ‘big stick’ of martial law must be used sparingly
Opinion

The ‘big stick’ of martial law must be used sparingly

Many of us may have forgotten that Bangkok is still under martial law.

On Saturday night we were reminded of the draconian law by the National Council for Peace and Order (NCPO) when it issued a warning to the editor and publisher of the Manager Weekly magazine. 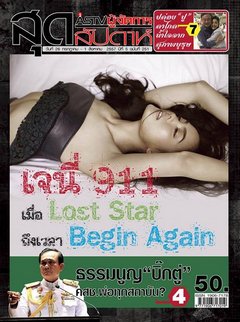 ASTV Weekly, the issue that brought a severe military warning, but no one knows why.

They were told that they may face the full wrath of martial law if they continue to report what the NCPO deems a dishonest dissemination of false information threatening to undermine its credibility.

The NCPO is wielding a big stick — in the form of the martial law — against the political magazine owned by media mogul Sondhi Limthongkul.

It is not hitting the accused just yet, because it is awaiting findings from the National Press Council and the Thai Journalists Association, which are to launch a probe into the ethical conduct of the magazine’s July 26-Aug 1 edition.

But media associations and fans of the magazine are as baffled as the editor and editorial staff about what information in the edition was deemed false and ill-intended against the NCPO.

This is because the junta has not given any details on the allegedly offending material.

The NCPO’s terse warning against Manager Weekly has opened up a floodgate of online comments. Many demand that the NCPO specify clearly which articles in the edition or which parts of the articles contain false information as claimed in the warning.

In a post on his Facebook page, National Press Council president Chakkrish Permpool asked the NCPO to submit its evidence in writing.

He urged the junta to clearly point to the false information contained in the magazine, as required by the council’s charter, so that his group can start its ethics probe.

Mr Chakkrish insisted media organisations would strictly follow their commitment to self-regulation among members and perform their duties honestly and straightforwardly without any bias.

He said he had held informal discussions with the editor of the magazine who expressed concern that the National Press Council might quickly wrap up the case without proper consideration.

I couldn’t agree more with Mr Chakkrish’s careful approach and some comments by the magazine's readers regarding the vague accusation made by the NCPO and the threat to use martial law against the magazine, its editor and publisher.

Libel laws are still enforceable and can be invoked if the NCPO feels its credibility has been undermined.

There is no need for the use of martial law or Article 44 of the provisional constitution which gives absolute power, including judicial power, to NCPO chief Gen Prayuth Chan-ocha because this is just a petty case.

The military regime made a big mistake when it issued Announcement No 97 to gag the media by banning all criticism of the NCPO's performance and works.

It was forced to revise the edict after protests from the media.

The threat to use martial law or any special law will only make the NCPO look like a bully wielding a big stick, ready to strike even at a small provocation.

I don’t know who is responsible for drafting the NCPO’s orders and announcements but they need to shape up and not present shoddy work such as the warning targeted at Manager Weekly.

Remember who made the following statement?

“One has to be careful about exercising power, especially absolute power. One has to make himself look smaller.”

PHUKET: Encroachers have trespassed on about 83 rai of a national forest reserve on Nak Kerd mountain, the headwater for Bang Wad Dam in Kathu district of this island resort province.

SAMUT PRAKAN: Fire gutted a warehouse at a pillow factory in Muang district and spread to two adjacent houses on Monday evening.