I really admire the bluntness of Dr Weng Tojirakarn.

A core leader of the United Front for Democracy against Dictatorship (UDD), the red-shirt movement, he posted a message in his Facebook page on Thursday saying the ongoing attacks on Wat Dhammakaya were an attempt by conservatives and traditionalists to destroy a group of monks who are the key power base of democrats, red-shirts, the UDD and of fugitive former prime minister Thaksin Shinawatra. 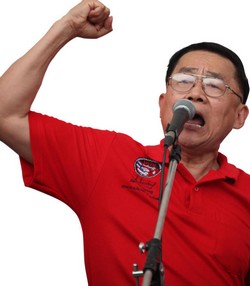 Weng Tojirakarn on stage at a red-shirt rally at Rajamangala stadium on May 22, 2014, (Post Today photo)

Dr Weng then linked the attacks against Wat Dhammakaya with the dumping of the Pheu Thai party’s rice pledging scheme after the May 22 coup, and drafting of the new charter by the Constitution Drafting Committee to clip the wings of democratically elected MPs and senators.

He dubbed it a grand scheme by conservatives and traditionalists to destroy their political opponents.

What is quite amazing to me is the candid admission, straight from the "horse’s mouth" you might say, that Wat Dhammakaya, the UDD and Thaksin are all linked together, and that the Dhammakaya monks are a power base of both Thaksin, the UDD and the democratic  movement.

Dr Weng’s admission that Wat Dhammakaya and its monks are a Thaksin power base is an elusive fact that most UDD core leaders and Pheu Thai party heavyweights have always been reluctant to talk about, let alone admit.

His timely confession sheds some light on the mystery surrounding the unprecedented decision of the Office of the Attorney-General to withdraw the criminal case brought against Phra Dhammachayo, the abbot of Wat Dhammakaya, about a decade ago over about 800 million baht in donations, including 1,500 rai of land.

The OAG’s decision was made when Thaksin was still prime minister.

Now, Phra Buddha Isara, the abbot of Wat Om Noi, who has launched a campaign to clean up the Sangha Supreme Council and all the mess implicating Wat Dhammakaya, and has demanded a full explanation from the OAG just why the case against Phra Dhammachayo was withdrawn from the court.

The OAG truly owes us an explanation.

As far as Dr Weng is concerned, I don’t know whether his admission just slipped off his tongue, or not. But he is responsible for what he said or wrote. If other UDD core leaders or Thaksin supporters are not happy with Dr Weng’s confession, unwitting or otherwise, then they should best come out and deny his message straight away.