It was the biggest ballot paper I have ever seen. The sample ballot paper shown to the media on Monday during a demonstration of the new voting process held at the Election Commission office was simply huge.

It was a whopping 60cm x 90 cm. And if you think that is already too big and too complicated, then watch out. Because this sample was designed for a poll where only 20 political parties contest an election.

There are more than 70 registered political parities, most of them largely unknown and, perhaps, set up only to claim financial support from the Election Commission.

On top of that, political groups can contest the election too, thanks to the generosity of the Constitution Drafting Committee (CDC), which wants to ensure that no political party is strong enough to form a parliamentary dictatorship. 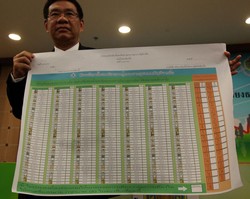 Election commissioner Somchai Srisutthiyakorn warned that the actual ballot paper on election day under the planned mixed member proportional (MMP) representation system with an open list may be much bigger if more than 20 parties and political groups contest the polls.

Just imagine a ballot paper more than one metre long filled with the names of all the candidates standing on the party list. It will be a nightmare for the voters, and especially for the elderly and, probably, first-time voters. The margin for mistakes and spoiling of ballots will be greater than ever.

Mr Somchai said ballot counting would probably take more than 70 hours to complete, instead of 24 hours as demonstrated in previous elections. He wondered if the CDC’s proposal for MMP representation with an open list was worth the headache.

It was disappointing that not a single representative of the CDC was at the demonstration on Monday, despite having been invited to attend.

In principle, a voting system should be easy to understand, and simple enough that voters feel encouraged to go to the polls to exercise their right. But the MMP system with an open list is just the opposite and may well drive away voters. Perhaps, that is the CDC's aim?

These enormous ballot papers will considerably increase the cost of an election - the printing cost, larger ballot boxes, extra costs transporting the bigger ballot boxes to the provincial halls for counting, and the cost of extra manpower for vote-checking and counting.

I found out that the maximum size of the ballot paper used in last year’s election in Australia’s Victoria state was about one metre. Maybe ours will beat even that if more parties and political groups contest the polls. But that is not something to be proud of.

Year of the Virus?

Over 200 now diagnosed with new SARS-like virus, as health experts say illness is spreading from person to person.