A reprieve, so they can continue to plunder?
Opinion

A reprieve, so they can continue to plunder?

Chambers of commerce in some coastal provinces have asked the government for a two-month reprieve for the owners of thousands of illegal fishing boats now moored at ports and jetties unable to meet the IUU fishing rule.

But it remains unclear just how the two-month respite would work.

If it means the owners of the vessels want more time to bring their boats and gear up to approved standard, to register with the Harbour Department and get licences from the Fisheries Department, then perhaps the demand is negotiable, although the government has already given them until the end of July to fix things.

In this case, the two departments should speed up the registration and certification processes so the illegal fishing boats can be legitimately registered and get back out to sea - if they meet the European Union's standard on illegal, unregulated and unreported fishing (IUU).

But if a two-month reprieve means the illegal boats are allowed to go out fishing again while they apply to be registered, the call by the chambers of commerce is crazy and short-sighted.

First of all, these illegal fishing boats have been on reprieve for years, ever since they first set sail, because the Harbour and Fisheries departments have never bothered to check them, to make arrests, to do their jobs, offering the same excuse as ever -- they do not have enough staff and too few boats to patrol the seas.

Can the chambers of commerce guarantee that once the reprieve has expired all these illegal fishing boats will be properly registered and comply with Europe's fish imports standard, and not ask for yet another holiday period?

These boats have long plundered Thailand's territorial waters with their illegal fishing gear and trawling methods, to the point there are almost no fish left to catch – not even trash fish normally used to make animal feed.

The owners of these rogue fishing boats have no respect whatsoever for the law or Mother Nature, and have already enriched themselves plundering our seas of resources that belong to all of us. And now the chambers have the nerve to tell us they have sympathy for them.

Allowing these irresponsible vessels to resume their pillaging would put Thailand at risk of a red card from the European Union, which means Thai seafood exports to the EU could be banned -- and that would have far-reaching impact. It is a major market.

Remember, EU officials will be here in August to assess Thailand’s progress in enforcing the IUU fishing rule. With thousands of illegal fishing boats still out at sea, you don’t need rocket science to guess what their conclusions would be.

We may go short of ocean fish, crab, squid and prawns on our dinner plates for a while, as supplies run down, but that would be only temporary. There are still farmed fish, prawns and crabs, and fish can also be imported from neighbouring countries even if we have to pay a little more.

In the long run, with fewer boats at sea fish stocks could recover and coming generations benefit. Or are we so selfish we prefer to eat all and leave nothing for them?

If the scoundrel owners of these boats want to return to the seas, the first thing they should do is to comply with the law and to show respect for the oceans and the sea life there – not ask for still more lenient treatment. 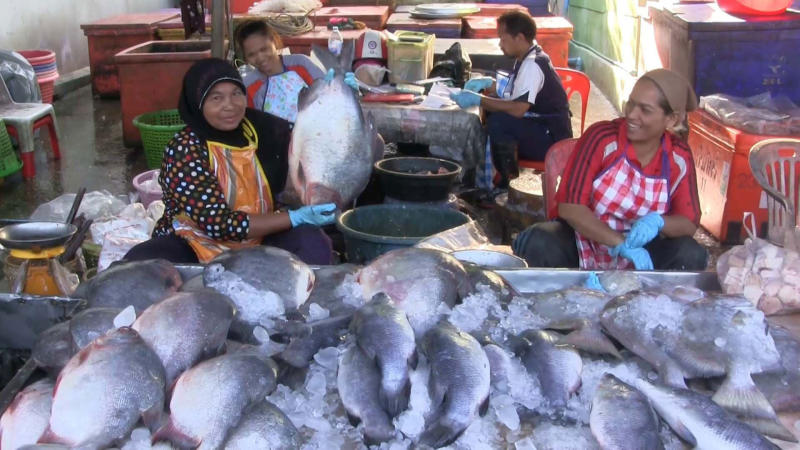 Fish vendors were all smiles at Plaza market in Hat Yai, Songkhla, on Thursday, July 2, 2015. Most trawlers in the far South are legally registered, and still catching fish. (Photo:Wichayant Boonchote)

A school headmaster arrested for a robbery and triple-murder at a gold shop two weeks ago has allegedly told police he killed to "spice up his boring life".

The Bank of Thailand and Hong Kong’s central bank said on Wednesday that they had moved a step closer to issuing digital currencies.