Forget Klong Dan, look at the Gulf of Thailand
Opinion

Forget Klong Dan, look at the Gulf of Thailand

For some, the old adage, "Fool me once, shame on you; fool me twice, shame on me," can be applied to the Klong Dan water treatment project saga. 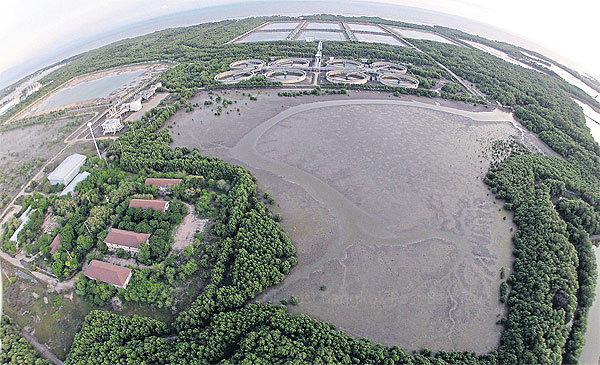 The Ministry of Natural Resources and Environment's plan to conduct a study into how to make best use of the project in Samut Prakan province, which was built in 1998 but never opened, has triggered worries it could end up as another "stupidity fee" for the state. It has also revived fears by locals that the plant, which they opposed years ago on environmental grounds, could once again pose a threat to the Gulf of Thailand.

The study, "A technical evaluation and people's acceptance of waste water treatment in Samut Prakan province (Klong Dan)," is to cost 315 million baht from state coffers. It is not clear how long the study will take.

This is not the first time the ministry has hired a consultant to find a solution to the corruption-riddled project after the government lost a court case with the contractor, and was ordered to pay a 9-billion-baht penalty fee.

In 2004, the Pollution Control Department spent 45 million baht hiring two firms to look into ways to make use of the 22-billion-baht project which was fiercely opposed by locals.

The study came up with five recommendations. First was to complete the project and invest more money to fix the already decayed infrastructure and adopt more advanced technology. It also suggested the department add a 10km pipe to siphon waste water out of the fishery area.

The second recommendation was to continue the project without discharging the water into the sea during the dry season and to reuse the water.

The third option was to abandon the three-billion-baht treatment ponds, find new sites to build smaller treatment systems, but still use the 125km pipeline.

The first study received praise from villagers and some academics.

Now, local activist Dawan Chantarahassadi is questioning the necessity of the new study, as authorities never acted on the 2004 version.

The waste water problem has to be solved, she said, "but we must not be led into thinking that the Klong Dan facilities will solve the problem only because we paid a lot of money".

Ms Dawan fears a series of stupidity fees if authorities try to revive the facilities.

However, the main concern over the facilities isn't only the budget, but the environment as the waste water, the toxic waste from the factories, will eventually be released into the Gulf of Thailand -- a major seafood source for the country. The project was designed to treat household waste and could not cope with toxic waste.

Conceived in the early 1990s, the original design featured two treatment ponds in Phra Pradaeng district on the western side of the Chao Phraya River and Bang Pu sub-district, which are close to municipal and industrial areas. It was set to cost 12.8 billion baht. But the original plan was revised to combine both ponds into one to move the facilities to a new site on a 1,900-rai plot of land which belonged to politician Vatana Asavahame.

The revised plan not only caused the budget to almost double, to 22.9 billion baht, but also introduced an unsound location as it was 20km away from the industrial zone, and required the installation of a 125km pipeline, to siphon waste water from Phra Pradaeng and Bang Pu to the Klong Dan site.

Ms Dawan said the ministry should turn it into a marine research and breeding centre and build smaller treatment plants close to factories and sources of pollution along the 125km pipeline. This would return the mangrove to locals.

It is not worth reviving the structure, abandoned for a decade, as the budget would be enormous, she said.

The cost of discharging waste water from the western side of the Chao Phraya River through the 125km pipe to be treated at the facilities in Klong Dan is not yet known, Ms Dawan said.

He believed authorities should make some use of the facilities as a huge amount of tax money has been spent and pollution in the Gulf of Thailand reached crisis levels years ago.

Yet he said authorities should not limit the options and get "trapped" into the idea that the plant must be revived and used as a treatment facility.

Instead, authorities must decide how to deal with polluted water entering the Gulf of Thailand, and make a decision, based on scientific data, on how to use the plant.

"If the study shows the original project is not economically sound, authorities must focus on other options," Prof Thongchai said.

The ministry needs to open the second technical assessment process to stakeholders and public participation and monitoring, he said.

The Ministry of Natural Resources and Environment must get experts, locals, officials and engineers to study the terms of reference, determine the cost of the study, and conduct technical hearings and economic and social hearings. Anti-corruption safeguards are also needed.

The Klong Dan project involves technical, social and economic aspects that must be addressed, he said. "And in terms of environmental engineering, there is more than one option. The technology can be revised to suit our needs."