On Thursday, Thein Sein's government will sign a permanent ceasefire pact with eight of Myanmar's ethnic rebel groups that have been fighting for independence for more than 50 years.

It has taken three years of tough negotiating -- including more than 300 meetings -- between the ethnic groups and the government to reach this watershed moment. For even though only eight are putting pen to paper, it signals the start of the next stage in the country's peace process.

Although more than half the ethnic groups involved in the talks have decided not to approve the deal at the moment, the door remains open for them to sign at a later stage. So it is far from being the nationwide ceasefire agreement the government has been trumpeting.

For Thein Sein -- who declared it one his government's key priorities shortly after taking office in 2011 -- it is a hollow victory, as this was going to be his crowning achievement and be the basis of his bid for a second term in office, under the mantle of the "man of peace". 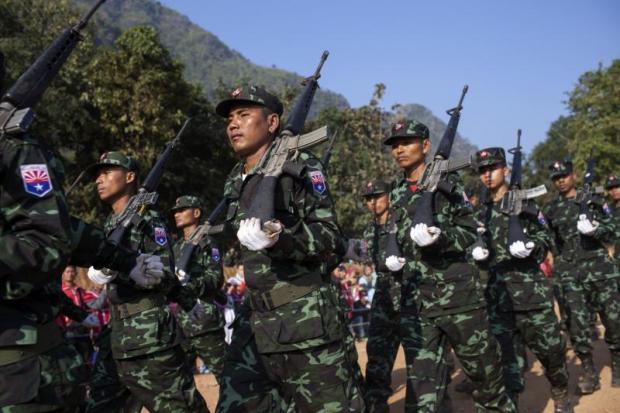 The signing ceremony will take place in the capital Nay Pyi Taw, in front of nearly a thousand guests. The country's political parties will also sign the agreement -- though the country's two leading opposition figures -- Aung San Suu Kyi, head of the main pro-democracy party the National League for Democracy and Hkun Htun Oo, leader of the ethnic Shan Nationalities' League for Democracy -- who had both been asked to sign in their own right, have declined to participate.

It will also be witnessed by international representatives from the UN, China, the European Union, Japan and Thailand -- demonstrating the valuable, behind-the-scenes support Bangkok has given to the peace process. India had also been asked to be a signatory, but declined as it is still fighting insurgents in its northeastern region, who have bases in Myanmar.

But several others have so far refused to ink the deal -- the powerful Kachin Independence Organisation, along with the Shan State Progressive Party (SSPP), commonly known as the Shan State Army, the New Mon State Party and the Karenni National Progressive Party. The National Democratic Alliance Army–Eastern Shan State, commonly referred to as the Mongla Group, are also not signing but have not made any public statement on the issue.

For them the issue is not the text -- which had been unanimously agreed earlier this year -- but who should sign. These groups insist the ceasefire pact needs to be inclusive -- all the ethnic groups should sign, or none: the key bone of contention is that three other groups -- the Kokang or Myanmar Nationalities Democratic Alliance Army, the Arakan Army and the Ta-ang or Palaung National Liberation Army -- were unilaterally excluded by the government. They are currently being blocked from signing the nationwide ceasefire deal, because they had been involved in heavy fighting with the Tatmadaw earlier this year.

For those who sign, there are immediate benefits. First they are automatically taken off the illegal organisations' list, under the Unlawful Associations Act, which carries a jail sentence for any Myanmar citizen convicted of associating with them. Recently there was a protest in Yangon against the detention of political activists jailed for alleged links with ethnic rebel groups. So now these eight organisations can meet people throughout the country, and especially in areas where they are based.

According to the agreement the "framework for political dialogue" -- the agenda for the political talks -- has to be agreed within 60 days of the signing, and the actual political dialogue must start within 90 days. This means that the process will go ahead with the ethnic signatories, as an official part of the process, along with the country's political parties and civil society. Those that do not sign will still be included, but as observers: they can become fully involved later once they have signed. There are tentative plans for the convening of a "peace conference" in early January, according to sources close to the process. But this is likely to be a symbolic affair, to ensure compliance with the agreement, but substantial dialogue and discussions would be deferred until after the new government takes office at the end of March 2016. The priority for the ethnic groups is to discuss and adopt some form of federalism and change the constitution.

But many areas in the agreement remain vague, especially on demarcation of territory, monitoring of the peace agreement, recruitment and opening of new liaison offices. This has been left to the new peace monitoring committee to sort out. It is meant to be formed within 15 days of the agreement being signed, and to meet to formulate its framework, 15 days after that. It would include representatives from both the government and the ethnic groups. But the ethnic groups also want international and independent monitors involved. This is unlikely to meet the approval of the Myanmar military leaders -- so the ceasefire agreement could still begin to unravel before the elections.

In the meantime, the Myanmar army has launched concerted attacks on the Shan rebel group, the SSPP in southern Shan state near the border with Thailand. They have ordered them to vacate their headquarters or face annihilation. This comes on the heels of increased fighting throughout the state. The RCSS almost opted out of signing the agreement as a result, but felt in the end signing would put pressure on the army to show their goodwill. "Once the signed agreement is on the table, with international support, the ball is in the Myanmar army's court," said a Shan rebel, on condition of anonymity.

Larry Jagan is a specialist on Myanmar and a former BBC World Service New Editor for the region.